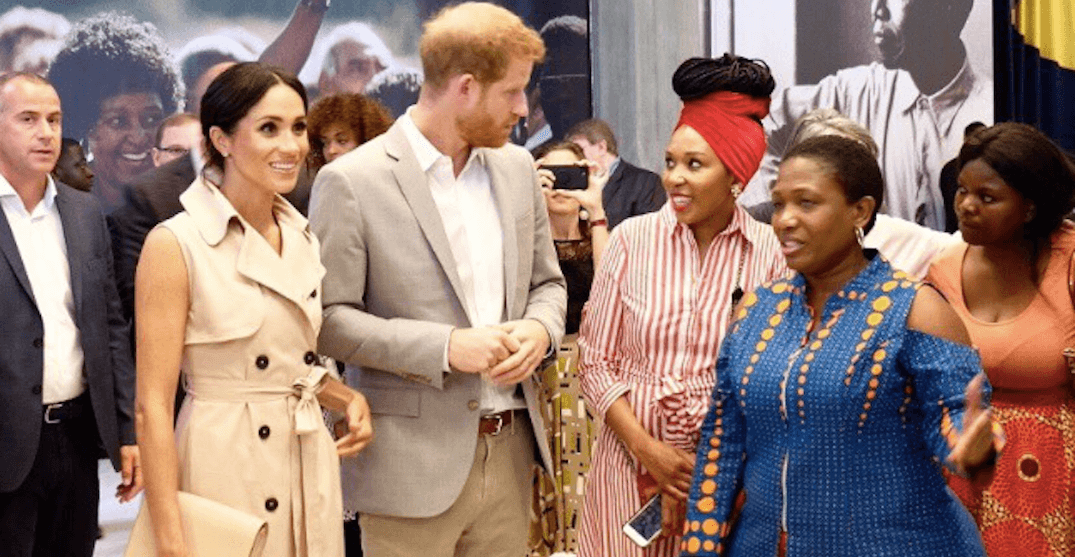 Meghan Markle may have been visiting an exhibit at London’s Southbank Centre, but what she was wearing came straight out of Calgary, Alberta.

The Duchess of Sussex made a public appearance with her husband Prince Harry on Tuesday to visit the Mandela 100 Exhibit — a collection of history, images, and memories celebrating what would have been Nelson Mandela’s 100th birthday — and she was looking stylish in a sleeveless trenchcoat dress.

Their Royal Highnesses arrive @southbankcentre and are met by Lord Peter Hain, Chair of The Nelson Mandela Centenary Committee and Elaine Bedell, Chief Executive of the Centre. pic.twitter.com/BfGxsnYLFq

The dress was from designer House of Nonie, which is owned and operated by Calgary’s own Nina Kharey.

Their Royal Highnesses hear speeches and meet people celebrating the official opening of the exhibition that will launch two days ahead of @southbankcentre’s Africa Utopia festival. pic.twitter.com/f5ZvKpZXpx

Markle is no stranger to Canadian designers, as she spent some time in Toronto while filming the television show Suits.

Markle has previously been spotted in clothing from Toronto brand LINE the Label, including a dress she wore during the official engagement announcement.

The House of Nonie commented on Markle choice of dress in a recent Instagram post, captioning a photo of Markle by stating, “what an amazing day for us! The stunning Duchess of Sussex, Meghan Markle in our Sleeveless Trench dress.”

What an amazing day for us! The stunning Duchess of Sussex, Meghan Markle in our Sleeveless Trench dress. Available to order at www.houseofnonie.com. #pinchme #wearcanadaproud (ph: Neil Mockford/Getty Images) thank you @jessicamulroney ♥️

The caption also made a quick shout out and thank you to Jessica Mulroney, a public relations strategist who has been known to assist Markle in some fashion decisions.

The dress is currently available on the House of Nonie’s website for $1,085 (that’s in Canadian dollars) and comes in black as well as the beige seen on Markle.