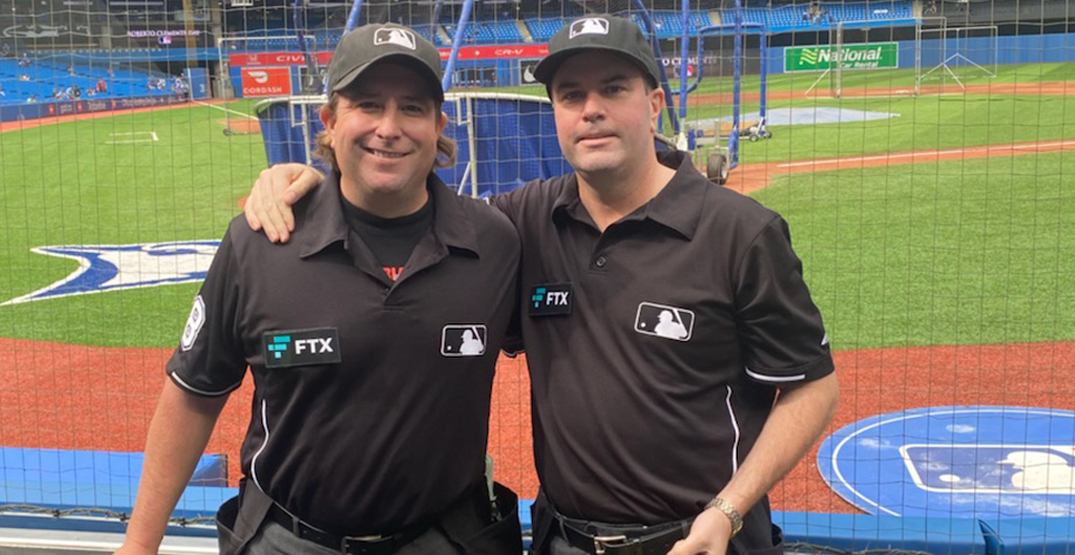 In every MLB player’s career, the time comes to hang up the cleats. The same goes for umpires, although their walk off into the sunset isn’t nearly publicized (if ever) as the retirement of players.

Then comes those who mimic MLB umpires. For an 11-year period, the seats behind home plate at the Rogers Centre had regular fans sitting in them — until last Wednesday, when two familiar faces reported for duty.

Eagle eye viewers may have noticed two particular fans in the left-hand corner of their screen, dressed in complete MLB umpire uniforms, calling the game as if they were on the field.

The “real fake umpires,” as they like to be called, are Tim Williams and Joe Farrell. They’re the same two fans who gained traction in 2009 and 2010 as they called games regularly at the Rogers Centre.

Williams and Farrell retired their act following the 2010 Blue Jays season, but they brought it back for a “one night only” resurgence during a Mets-Giants game at Citi Field during the 2015 season.

Then six years later, with the Blue Jays back in Toronto in the thick of a playoff race, they figured “Why not again?” and hauled out the complete umpiring gear and got back to work in their usual spot, in the Action Seats right behind home plate at Rogers Centre.

A look at the umpire impersonators at work today during the Blue Jays game. (Video via Sportsnet/MLB) pic.twitter.com/g7bSe5TBy6

“I would say that the global pandemic has been extremely difficult for everyone with the prolonged lockdowns in Canada and the lack of baseball in the city until very recently,” Williams told Daily Hive.

“It was a very positive experience being back at the ballpark and especially as we are in the midst of potentially making the playoffs with arguably the most exciting, dynamic team in baseball.”

It took little convincing from Williams for Farrell to don the black umpiring gear, complete with face-mask, and sit in their usual perch behind home plate and make their signature gestures and strike calls from a few rows back of the action.

“He goes: ‘What would you think if we came out of retirement for one game?’ And my answer was the same answer I gave him the first time before the first game we ever did,” Farrell said.

“So let me get this straight. You want me to dress up like an umpire, sit behind home plate, have a bunch of beers, and belt out strike calls all day. I said: ‘I’m in.’”

One addition to their repertoire this year included a special piece of equipment; instant replay headsets. Yes, they even brought giant headsets to the game in the event of a replay, but it never happened during the game.

“We were very disappointed that we had a game there on Wednesday without a replay call,” Farrell said. “That would’ve been a fresh addition, and if they would’ve caught us on camera with those on, it would’ve been really entertaining for people.”

The uniforms are as close to authentic as one can get, complete with the MLB emblem, ball bag, and even the FTX cryptocurrency logo, which recently placed patches on umpire’s uniforms post-All-Star break.

With plenty of empty seats in the stadium, Williams and Farrell stood out a lot more. But with a close to capacity 100 level during Wednesday’s game against the Rays, the duo didn’t quite stick out like they used to over a decade ago.

But fans in the ballpark and watching on TV took notice that the duo were back to their old ways, calling strikes, ringing up hitters, and even mimicking throwing baseballs back to the pitcher after a ball went out of play.

Interestingly enough, the pair has a great relationship with the MLB umpiring crew, and they often used to meet up with the umpires for dinner whenever they’re in town. 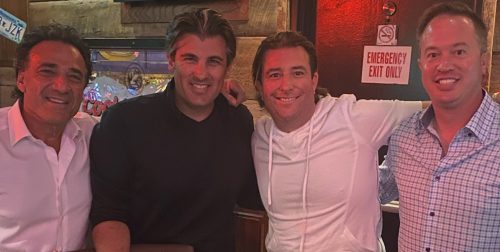 Williams and Farrell are involved with the MLB umpires’ charity, Umps Care, and Williams’ wife Caroline is an advisor on the charity’s board of directors.

Back in 2008 and 2009, the fake umps went on a four-day road trip and raised $8,000 for Umps Care with their efforts. In the future, once travel restrictions open up, the pair would love to embark on another fundraising tour in the future, all while performing in their full umpire’s gear at MLB ballparks.

Williams and Farrell were happy to be back in their familiar roles again, but they’re not expecting to return to umpiring duty again this season. And if the Blue Jays make it into the postseason this year? Farrell said he’d never show up to the ballpark in the umpiring gear during a Blue Jays postseason game, as he wouldn’t want to detract from the action on the field.

But for one innocent Wednesday afternoon game at Rogers Centre, the umpiring pair came out of retirement. However, Farrell hasn’t completely ruled out a return to action. So long as they have the gear, there’s always a chance they’ll be back in uniform someday down the road.

“It wouldn’t surprise me if every once in a while, ’till we’re both probably dead, we’ll come out and do a game and have some fun,” Farrell said.