There’s much more to life at Purdys Chocolatier than boxes of chocolates. Inside their sole production facility on Kingsway in Vancouver there’s a small area called the Chocolate Kitchen, which is the domain of the curious culinary minds who help develop new products for the venerable chocolate-making company and create recipes for Purdys fans to use at home.

Purdys’ Head Chocolatier, Gary Mitchell, is tasked with overseeing the new chocolates for the company, but backing him up is Mark Flaming, a Chocolatier Apprentice fairly new to the Purdys team. Also at work in the space is Shawn Taylor, who serves both as the company’s Culinary Advisor and photographer.

Both Taylor and Flaming are enthusiastic about the versatility of chocolate as a core ingredient, and also the unique way working with chocolate gives home bakers and cooks such joy.

Flaming says that his team’s Chocolate Kitchen experimentation results in about 150 ideas per year, but only a small portion, about five or six, end up as Purdys products on store shelves.

It takes anywhere from four or five months to two years, says Flaming, for a new Purdys product to go from concept to production. For example, their Raspberry Balsamic chocolate piece was in the research phase for a couple of years as they experimented with different Balsamic vinegars to get just the right flavour and texture in the final product.

Although he’s only been with Purdys for a couple of months, Flaming has quickly come to love the opportunities the gig gives him to teach classes at the South Granville Purdys location on making chocolate treats like truffles and bark. Not only are the class participants delighted to be getting to work with chocolate, but they’re also interested in the “bean to bliss” factor, and the focus Purdys has put on industry specifics like Single Origin, Fair Trade, and sustainability.

Flaming came to Purdys, and Vancouver, by way of Toronto, and a background in pastry and retail. “I’ve always had a passion for chocolate and candies,” adds Flaming, and says he finds it “fun talking to customers,” making his role at Purdys particularly ideal. 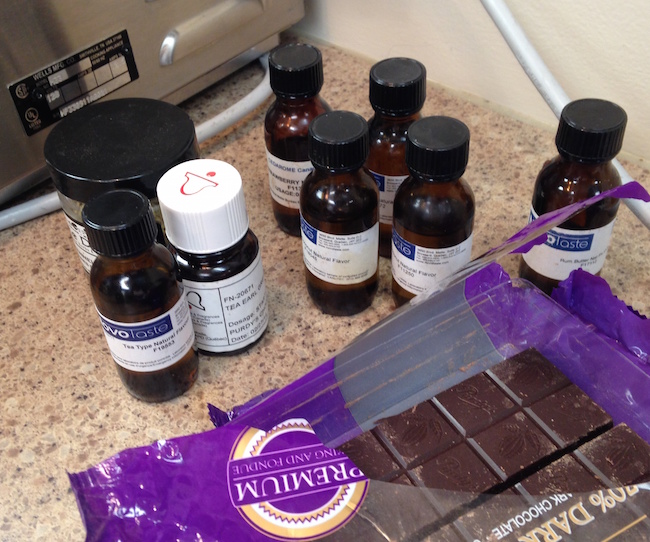 Passion is at the core of the kind of work Flaming does with Head Chocolatier Gary Mitchell. Flaming explains that they may have anywhere from one to 10 ideas and recipes going in the Chocolate Kitchen during a given week, and that it is often the passion behind the product that drives the development process.

“There’s a lot of though process that goes into each product,” elaborates Flaming. “Will it be more melty, more smooth?” he offers as examples of some of their culinary concerns.

Quality is also a significant factor in what goes on in the Chocolate Kitchen. “We never compromise quality,” points out Flaming. “We never want to put out something that’s not top notch.”

As Culinary Advisor, Taylor spends about one day a week in the Kitchen, working on recipes that end up online (Purdys Chocolate University) and in Purdys e-books that function for customers, as he describes, as “a second connection to what we do.”

Spanning not only sweet applications––like the seasonally-relevant brownies infused with Baileys and studded with salty pecans pulled right from the nearby roasting room Taylor makes us during my visit––Purdys puts out recipes that use their chocolate in savoury and drink recipes as well. For home bakers who love Purdys’ quality and flavour, their retail shops carry 50 gram bars of milk and dark chocolate ideal for use in cooking and baking, which is what Taylor uses for the brownies, and, shortly after, what Flaming has me use when we work together to make a batch of dark chocolate truffles. 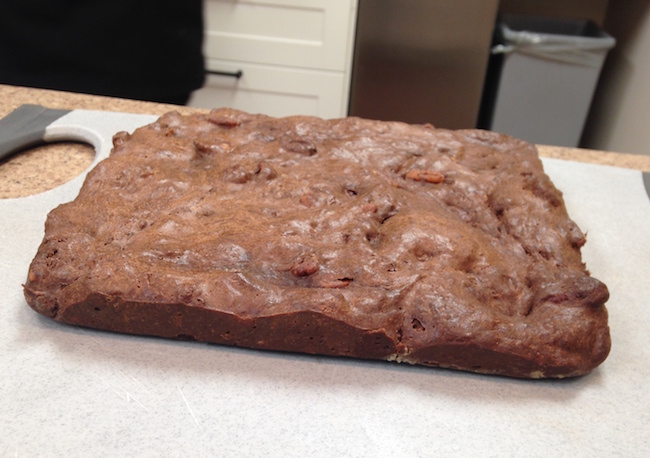 Taylor, too, has a culinary background, though the Montreal native says his training was all hands-on under the tutelage of a variety of chefs in professional kitchens across the globe. He came to Purdys as a photographer, and still takes every photo of the chocolates and candies the company uses (and says that taking photos of chocolate poses the idiosyncratic consideration of the variable nature of the product’s surface).

While what Taylor does for Purdys doesn’t end up in the stores, he says the Chocolate Kitchen crew “all draw inspiration from each other,” and sees his role as being part of creating recipes “so people can see what they can do with [Purdys] chocolate, or chocolate in general.” 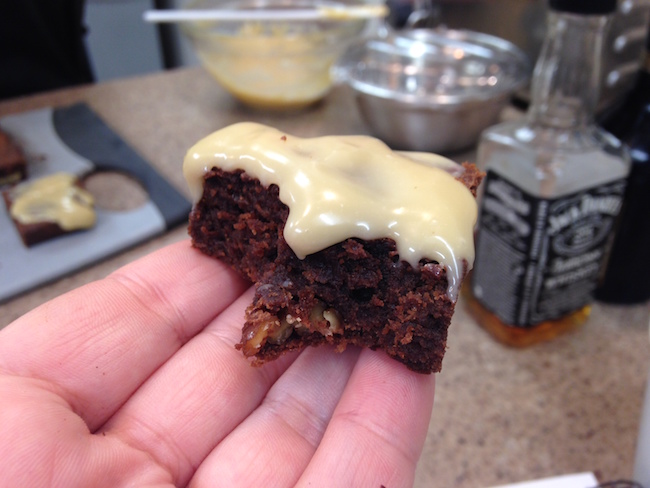 When it comes to Purdys, customers are often fiercely loyal to a certain staple, be it Hedgehogs, Sweet Georgia Browns, or Melties. But there are so many other delicious treats being made, many of which have quickly become contemporary favourites, like the Himalayan Pink Salt Caramel. Purdys also rotates seasonal favourites in and out of production during the year, like the Pear Lemon Caramels that are a big hit around Mother’s Day.

To make our truffles, I get to step into Flaming and Taylor’s shoes for the day, not only because I’m mixing and pouring the melted chocolate, but also because when it comes to the almost-blank canvas of the chocolate the flavouring on this day for this one-time-only product is up to me. 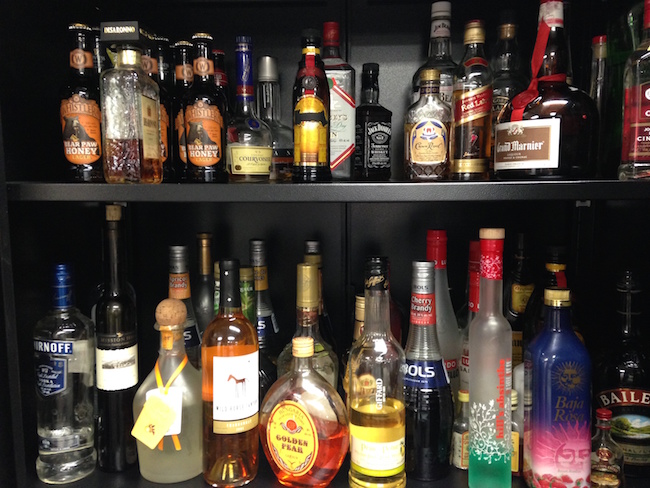 Unlike Flaming, who comes in ready to dive into a recipe thanks to finding inspiration, I stand first in front of their impressive shelves of interesting booze bottles (alcohol is often key for flavour and acts as a natural preservative in chocolates), then peruse the tiny bottles of flavourings. We go with Earl Grey, but spend some time getting it right, adding a secondary tea flavour, tasting the mix with a pinch of dried lavender or fennel (neither work) before settling on what tastes like a winning ratio.

It’s just a small taste of the hard work, trial and error, and delicious fun that happens day to day in the Purdys Chocolate Kitchen to come up with a batch of truffles in one morning. But for Taylor and Flaming, it’s all in a day’s work.

Besides, as Flaming points out, it’s a pretty sweet situation for experimentation: “You get to eat your mistakes.” 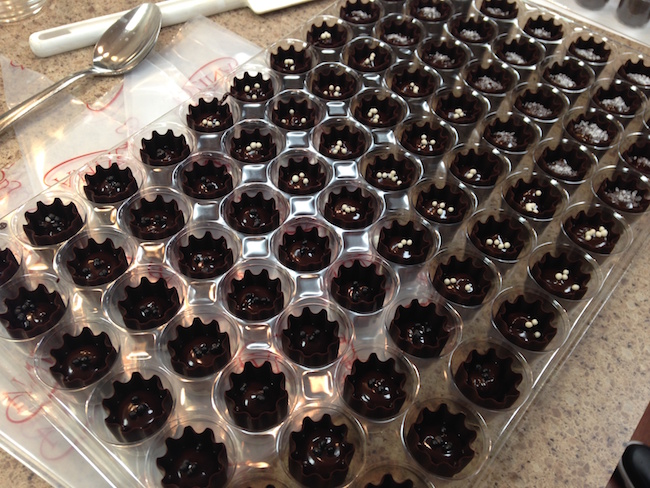