With B.C. Day approaching, the provincial government has announced a new way British Columbians can be honoured for making a difference in their communities.

The newly revealed “Medal of Good Citizenship” will be used to recognize individuals who work to better their communities without the expectation of personal gain.

“This year and going forward, good citizens whose actions are making a difference in their communities will have the opportunity to be officially recognized by the Province,” said Shirley Bond, Minister of Jobs, Tourism and Skills Training and Minister Responsible for Labour in a press release.

“The B.C. Day long weekend is the perfect time for British Columbians to think about those people in their communities who exemplify good citizenship with acts of generosity and service, and consider nominating them for this provincial medal.”

The front of the medal sports the shield of British Columbia, while the back features an engraving of a Pacific Dogwood, along with the words “Generosity, Service, Selflessness”.

If you know of someone if your community who you believe deserves the Medal of Good Citizenship, details on nomination can be found at www.gov.bc.ca/medalofgoodcitizenship. The deadline for nominations is September 25, 2015. 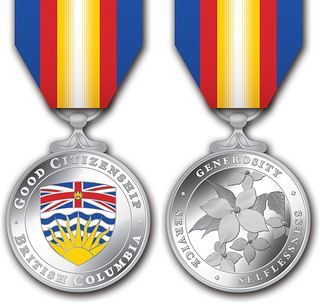 Image via Province of British Columbia