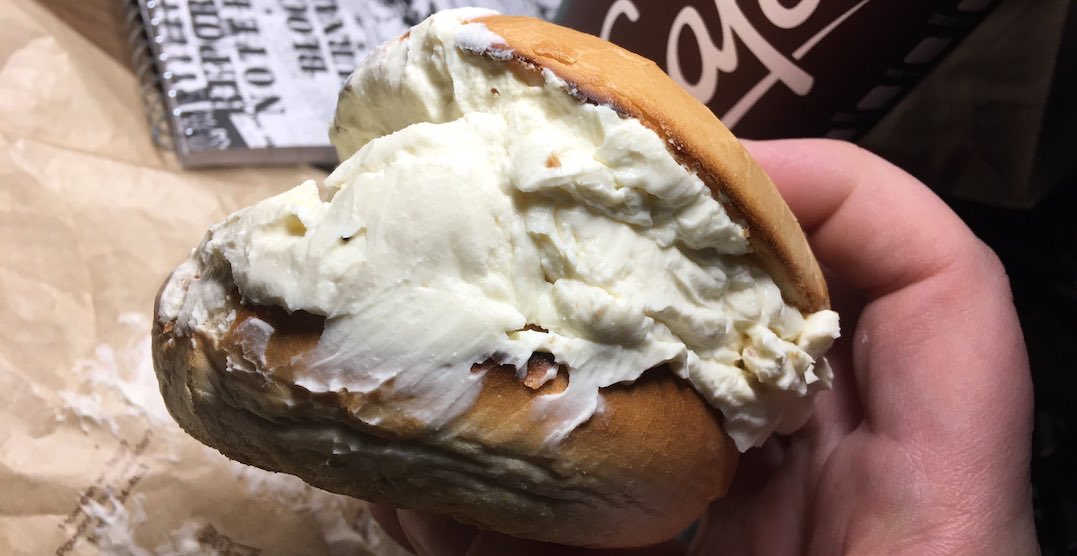 It’s not every day your breakfast makes headlines, but once in a while, you strike gold.

Or, in some cases, simply a lot of cream cheese.

That’s exactly what happened to Bryan Passifiume, reporter for the Toronto Sun, when he shared an image of his bagel with “extra cream cheese” order from McDonald’s to Twitter this week.

The glutenous tower of dairy, described in one tweet as a “McMonstrosity,” earned itself a story in Time Magazine. The piece highlights just how far outside the typical range of fast-food cream cheese thickness this particular bagel falls.

More photos of this monstrosity. I ordered extra cream cheese as they usually just apply it like butter, but this is clearly just an exercise in passive-aggressiveness. How do I possibly eat this? pic.twitter.com/XM70yMrnqp

“LOL what the hell, @McDonaldsCanada,” Passifiume posted to Twitter on Tuesday morning, beginning what would be a large thread exposing the unexpected thickness of the bagel’s spread.

He then compared the bagel to a lotto ticket, a regulation NHL hockey puck (which the breakfast item was comparable to in girth,) and an emergency naloxone inhaler turned on its side.

Almost as girthy as a regulation NHL hockey puck pic.twitter.com/RpWCIIRq1A

Following a morning of fun, Passifiume wrapped the bagel back up and reportedly left it on his desk overnight, to be compared to the next day’s order.

Indeed, he arrived on Wednesday morning with a new “bagel with extra cream cheese” order, that — although still large — was slim in comparison to Tuesday’s debacle.

Here’s yesterday’s McMonstrosity next to today’s offering. As you can see the cream cheese has yellowed and crusted overnight, and the bagel has shriveled. It’ll probably end up in the trash, or I’ll pretend to compost it. pic.twitter.com/wSmWfsOiX3

Order number two was reportedly still difficult to eat, as Passifiume said that it felt like he had “swallowed a shipping container of cream cheese.”

Daily Hive has contacted McDonald’s Canada for comment but the company had not responded by the time of publication.