The latest polls are suggesting that Maxime Bernier could be the only major party leader that could lose his own riding.

Maxime Bernier has held the Beauce riding since 2006. His family has a prominent presence in the electoral district, just south of Quebec City, as Maxime and his father, Gilles Bernier, have held the seat for a combined 26 years.

The younger Bernier, once considered the favourite to win the Conservative party’s leadership race — he lost to Andrew Scheer in the final vote by less than 1% — formed his own political party, the People’s Party of Canada (PPC) in September 2018 after feuding with his colleagues over dairy supply management.

Bernier’s risky political journey will be put to the test today as the PPC lobbies to get votes from his home riding as a young party.

Bernier’s right wing policies have caused controversy throughout his campaign, including denying that there is a climate crisis (while calling environmentalist Greta Thunberg mentally unstable) and lobbying to substantially reduce immigration all while being criticized for not standing up against racism and discrimination in the country.

4/ @GretaThunberg is clearly mentally unstable. Not only autistic, but obsessive-compulsive, eating disorder, depression and lethargy, and she lives in a constant state of fear.

According to October 20’s poll projection, from the electoral website 338Canada.com, the latest projections put the PPC within the margin of error of losing their home riding, as they are only narrowly ahead of the Conservatives 36.4% to 32.5%. 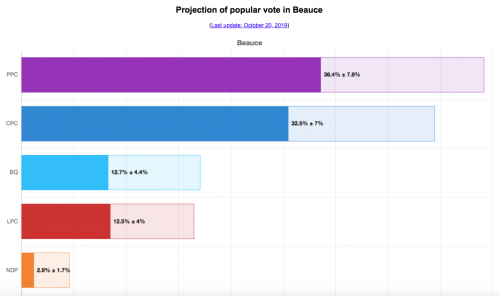