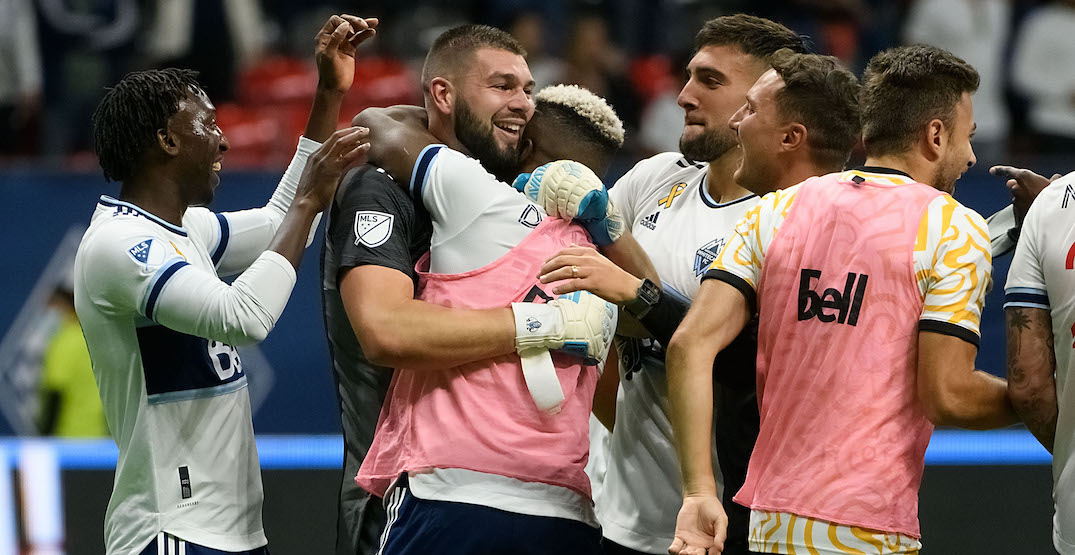 The Whitecaps push to the playoffs is trending in a positive direction thanks in large part to the fantastic play of Max Crepeau.

That was never more evident than on Saturday night at BC Place, when the Whitecaps goalkeeper made a clutch stoppage time penalty save to preserve a 1-0 victory over FC Dallas.

“I remember running up to Max and saying you’re going to save this,” Whitecaps defender Andy Rose told reporters after the match. “I just had a great feeling he was going to save it. What an incredible moment. The belief, the momentum that gives the team. Those are the type of moments you just want to be a part of when you join a club.”

The @WhitecapsFC ’keeper saves all three points for the home side. 🧤 pic.twitter.com/PdGooDJLvB

After a fractured left thumb limited Crepeau to four matches last season. He is in top form this season and showing he has all the tools to become one of the best MLS goalkeepers.

In his third season with the Whitecaps, Crepeau is on pace to set career highs in wins, games played, starts, and minutes. His current 73% save percentage would be his MLS best, and the Canadian keeper is one clean sheet away from tying the five he earned in 2019.

After sitting near the bottom of the standings for the first half of the season, Crepeau has jolted Vancouver back into the playoff conversation — just three points back of Real Salt Lake, with one game in hand. Since July 17, the Whitecaps are on an impressive 6-1-6 run in MLS play.

A large part of Crepeau’s success is because of the decade of work he has put in with his goalkeeper coach, Youssef Dahha. Crepeau and Dahha previously worked together with the Montreal Impact and Ottawa Fury, and they know exactly what buttons to push to get the best out of each other.

“He knows how I am mentally and physically, and how I work,” Crepeau explained. “I know his work as well, and he gets the best of his goalkeepers by pushing them on a daily basis. If it’s not good enough he’ll tell you. That’s the beauty of Youssef, the quality of what he will get out of his goalkeepers. Whatever he sees, he’s going to tell you, and he’s going to tell the truth. He’s not going to sugarcoat anything. It’s the way it should be.”

The 49-year-old Dahha joined the Whitecaps in December, 2018, bringing a high level of intensity and a strong work ethic to his goalkeepers. The no-nonsense Moroccan can be heard yelling all sorts of instructions, during Whitecaps training sessions at UBC.

The connection between Crepeau and Dahha goes back to when Crepeau was a young teenager with the Impact academy. When Crepeau rescued the ‘Caps on Saturday, it was the goalie coach with the big heart, who was given the credit and called upon to say a few words.

Crepeau and Dahha don’t just work on the field. Scouting the opponent and knowing what kind of tendencies a penalty kick taker might have, is a huge part of preparing for a match.

“Yeah that’s a secret,” Crepeau said, when asked if he knew were FC Dallas striker Franco Jara was going to shoot on Saturday. “That’s a secret, of course.”

There has been an added focus and determination since Marc Dos Santos was sacked on August 27. Whitecaps players know they don’t have a lot of margin for error down the stretch.

“The past two games, we’ve felt like we’ve needed the points,” Crepeau explained. “It’s not even negotiable. We really need to close things down because it’s three teams at 33 points. It’s really tight, everyone knows what is at stake. Everybody wants to be above that red line at the end. We’re realizing that slowly the clock is ticking, there’s no more points that we can afford to drop.”

Seattle jumps KC in the standings with their win tonight. 🔝 pic.twitter.com/Oig7h6cLlz

There is no rest for the Whitecaps as they embark on a crucial stretch of the season. The ‘Caps have nine matches remaining, with games at Houston on Wednesday and at home to San Jose on Saturday upcoming.

If Crepeau can continue his brilliant play, the Whitecaps could make the playoffs for the first time since 2017.