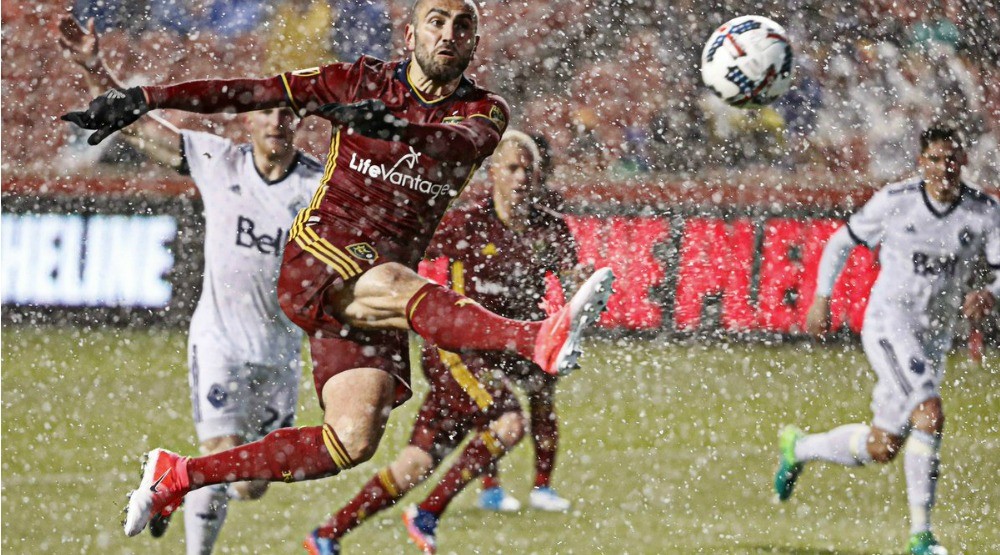 It’s been a busy week for the Vancouver Whitecaps, who were playing their third match in eight days on Saturday.

For Real Salt Lake turmoil had been the theme of the opening month of the new season. They had yet to win a match, and fired their coach after they lost the first three matches of the year.

On paper it looked like it could be three easy points for the Whitecaps, but it turned out very different in the end.

Even before the match between RSL and the Caps kicked off it looked like bad weather was going to be an issue.

Once the match got underway the weather went from bad to worse, and the snow soon started sticking to the pitch.

By the time the second half started conditions has deteriorated enough that the grounds crew regularly had to clear snow off the pitch markings so the game could continue.

While it may not have been fun for those in attendance at Rio Tinto Stadium, at least some people managed to find a little humour in the awful weather.

In the end the weather cannot be blamed because it was their inability to generate quality scoring opportunities and defensive issues that cost the Whitecaps the match.

Since Robinson took over as the Whitecaps coach in 2014 he’s religiously stuck with the 4-2-3-1.

Robinson’s adherence to this formation has long been a point of discussion among fans, but on the road in snowy Salt Lake City he decided to change it up.

The timing of the formation change seemed odd considering the team was playing their third match in eight days, and many regulars were not in the starting XI.

The change did not seem to suit the Whitecaps, who immediately looked lost and ineffective in the new formation.

Three at the back is not working for the 'Caps. Robbo will need to change the formation at the break… #RSLvVAN #MLS

352 can either be a master stroke from Robo or a complete disaster.

The bad weather and the major changes to the lineup make it difficult to pass judgement on the new 3-5-2, but given time and a complete squad it could potentially give the Whitecaps the new look they need.

Until then many fans are more than happy to completely forget it ever happened.

This was a match that the Whitecaps really should have won.

RSL are no longer a Western Conference powerhouse, and have been dealing with numerous problems since the start of the season.

Real was still without a win even after Jeff Cassar was fired as head coach and replaced by Mike Petke.

Moreover, RSL was mired in a six game home winless streak, which was their worst funk at the RioT since 2007.

The home side thoroughly dominating proceedings here. 'Caps fortunate to remain at 0-0 through the opening 30 minutes. #RSLvVAN #MLS

Even before the weather turned really bad the Claret and Cobalt looked like the better team.

RSL had many opportunities to open the scoring in the opening half hour, with Joao Plata in particular coming close on three occasions.

On the other side of the ball the Whitecaps were not able to score on the few chances they had in the match, and often found themselves scrambling to defend attacks from a very determined and rejuvenated RSL side.

Honestly, hard to draw any firm conclusions from a game like that but Caps should've been down 2 or 3 before the snow started. #VWFC

The Whitecaps (1W-3L-1D) have now dropped down to ninth in the Western Conference, and next play the Seattle Sounders in a huge derby match at BC Place on Friday night.