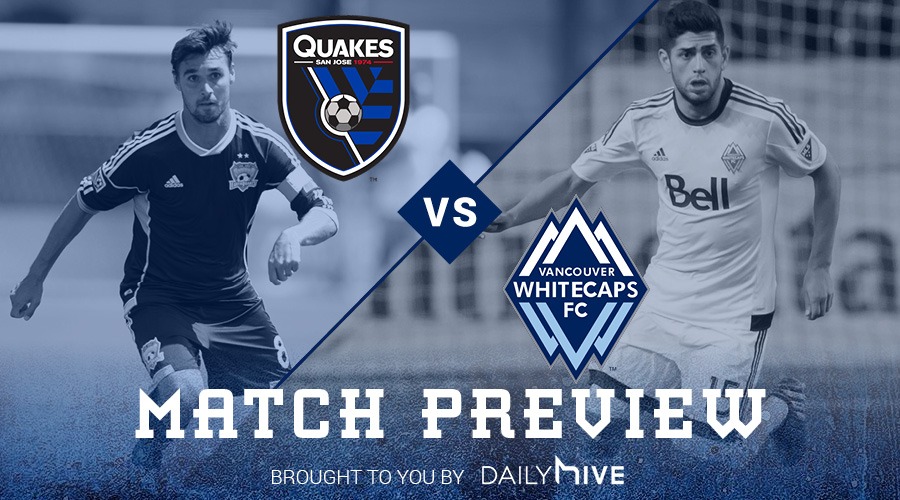 After a late season FIFA World Cup qualifying break last weekend, it’s back to work for the Vancouver Whitecaps.

The Whitecaps’ season is drawing to a close and on Sunday they will play the San Jose Earthquakes in their final road game.

In their previous meeting on August 12th, it was the ‘Quakes who came out on top beating the Whitecaps 2-1 at BC Place.

With both teams now eliminated from the playoff race, there is only pride to play for on Sunday afternoon.

Playing for pride (and jobs)

Realistically the Whitecaps have been out of the playoff picture for some time. However, it was finally made official when they lost to the Seattle Sounders in a heated derby match in Vancouver two weeks ago.

It’s a disappointing end to a season in which fans and pundits alike had predicted great things from the Whitecaps.

Vancouver struggled right out of the gate, but showed some rays of hope until they lost the Voyageurs Cup at the end of June. Since Canada Day the Whitecaps have won just twice, and have plummeted down to the Western Conference basement.

The tribulations for Carl Robinson and his team this year have been many: injuries, untimely international call-ups, and on-field disciplinary problems have plagued the team right from first kick.

In addition, and perhaps most concerning of all, is that the Whitecaps’ best players have been anything but their best players all year long.

The ‘Caps started the year with three designated players, but that was reduced to two when striker Octavio Rivero was transferred to Colo Colo in Chile earlier this summer.

During his 18-month stay in Vancouver Rivero was often crucified for not scoring enough goals. With Rivero on the squad this year, however, the ‘Caps scored a total of 27 goals. In the 15 matches since his departure the Rivero-less Whitecaps have managed to score a meagre 14 goals and have been kept off the score sheet in 8 matches.

To compound problems Vancouver’s two other designated players Pedro Morales and Matías Laba have not been at their best.

Morales, who was injured most of the 2015 season, has only shown glimpses of the form that wowed fans when he joined the team in 2014. After one standout year out of three and a projected cap hit of $1.4 million in 2017, Carl Robinson and the Whitecaps’ brass will have to do some serious thinking on whether or not they will want to bring Morales back again next year.

Laba, on the other hand, has somewhat returned to form in recent times. It’s been a tough year for the Argentinian who has had to contend with his own lack of form, a team that been woeful in ball possession, and playing in front of a defence that has often resembled a fire drill.

Despite the poor form earlier in the season Laba is still one of the top defensive midfielders in Major League Soccer, and has to be considered one of the key pieces in the Whitecaps’ core moving forward.

Throughout the rest of the squad inconsistency has been the theme all year long.

Defender Tim Parker has struggled at times in his sophomore year, and Kendall Waston has been a shadow of the player that we have seen in the past two seasons.

Further up the pitch winger Cristian Techera has been virtually anonymous after an outstanding rookie MLS season in 2015. The diminutive Uruguayan has rarely had an impact and has become a fixture on the substitutes bench.

However, it hasn’t been all doom and gloom for El Bicho. Techera had fantastic game against Central FC in the CONCACAF Champions League two weeks ago scoring two goals and tallying two assists. Sadly, it wasn’t enough and Techera rode the pine in the crucial Cascadia Cup match against Seattle a few days later.

Again, the lack of scoring for the Whitecaps has been well documented throughout this very long and frustrating season. Post Rivero it has been Erik Hurtado who has been the best striker scoring four goals in the last 4 matches.

With their season now over, the Whitecaps are effectively running out the clock. There still is a chance to win the Cascadia Cup if they beat Portland in two weeks, but the winner will ultimately be decided by a tie breaker.

The remaining two matches are a chance for the players to audition for 2017. Whatever happens in these final games it should help Carl Robinson decide who stays and who goes when he makes the inevitable changes to his squad this winter.