Grab a mask, dancing shoes, a sense of adventure, and get ready to get down… all for a good cause.

On Saturday, March 29, hundreds of black-tie revelers will descend on the Fairmont Hotel Vancouver for the second annual Masquerade Ball, with all proceeds benefitting the BC SPCA.

The evening will be emceed by the fabulous CTV Morning Live host Keri Adams, who says there’s something “mysterious and positively romantic” about donning a mask for a ball.

“For a brief time, I’ll get to be someone much more alluring, mysterious, and likely in need of a guide to help me see where I’m going!  Can’t wait to pretend not to be clumsy for a good cause,” she told Vancity Buzz.

The Bradley McGillivary Blues Band will be providing the night’s entertainment.  There’s also a 50/50 draw, silent auction, great prizes from the Vancouver Art Gallery and Cartier. And, of course, there’s fabulous food. The grand prize is two tickets wherever WestJet flies.

“The ball will be a glamorous and elegant event with revellers donned in period costumes, ball gowns, formal wear and masks!  Versailles or the Doges Palace right here in Vancouver!” said organizer and House of Pete owner Jenny MacKay.

Tickets are $99 or $350 for 4 and are available at the House of Pete or Sit Doggie Daycare at 1064 Davie St. Boo La La Costumes is offering a 15% discount for gala-goers for purchases, rentals and masks.

Last year’s inaugural event, attended by a mix of journalists, bloggers, SPCA donors and public figures, was hosted by Breakfast Television’s Dawn Chubai, a dedicated supporter of the BC SPCA and animal welfare issue.  The 2013 event raised $6,000 for the agency. This year organizers hope to more than double that, aiming for $15,000. 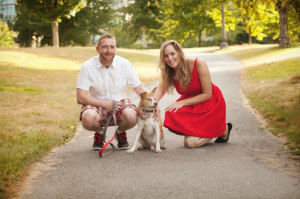 Jenny MacKay with her husband and senior dog Pete

The event was born from the love MacKay felt for her best friend Pete: a beautiful senior dog she and her husband adopted from the Sunshine Coast SPCA in 2010.

Nine years old and suffering severe allergies and symptoms of abuse, Pete had languished unwanted in the shelter for months because of his age and health problems.

“I, however, only saw a beautiful dog with a larger than life personality in need of a loving home.   It only took a few minutes for Pete to steal my heart,” said MacKay, who started her dog accessories company, House of Pete, just a few months later. 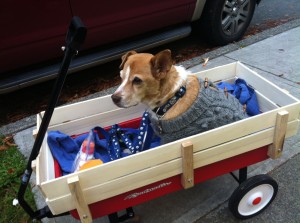 MacKay decided her company should focus on charity after Pete was diagnosed with a life-threatening immune disease.

Her first act was to donate dozens of leashes to the SPCA, and then, she started planning the 2013 ball.

Last December, MacKay and her husband made the difficult decision to put Pete down after he suffered renal failure as a result of the medications he’d been taking.

“Pete will be with us always.  He was, and is, my best friend and greatest love.  The Vancouver Masquerade Ball in support of the BC SPCA will continue to be an annual event, on the last Saturday in March, and all of Vancouver can join me to celebrate Pete’s memory by giving back and supporting animal welfare,” MacKay said.

The BC SPCA cares for 25,000 injured, abused, neglected and homeless animals every year, and relies entirely on donations to fund its services and programs. Last year, the agency responded to more than 7,000 animal cruelty complaints.