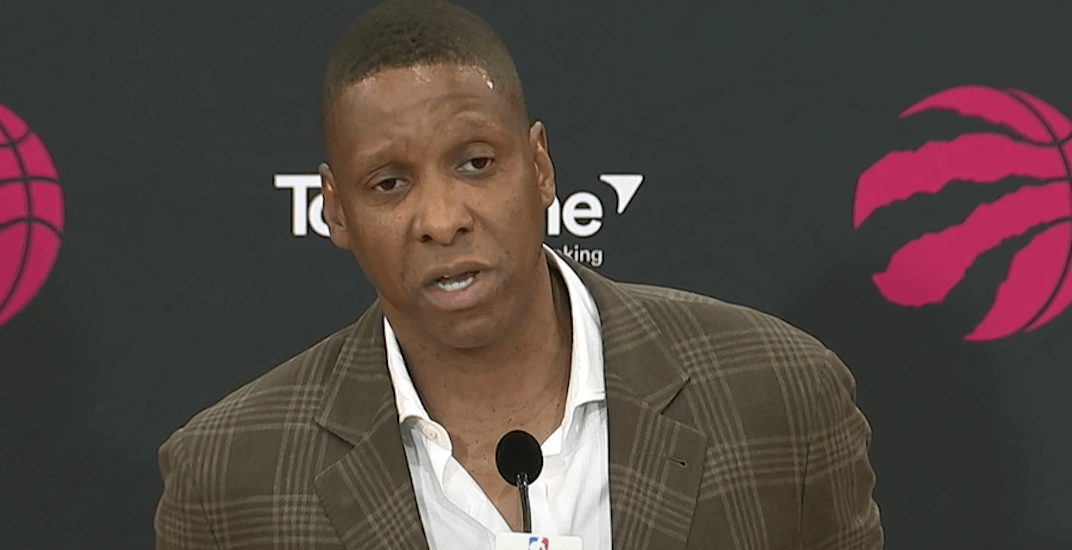 As President of the Toronto Raptors, Masai Ujiri knows the buck stops with him.

Speaking to the media for the first time since Wednesday’s blockbuster trade with San Antonio, he was of two minds.

On the human side, he was apologetic.

But from a basketball perspective, he made no apologies.

“It’s one of the tough things in this business,” Ujiri explained. “We want to win. And I have to do everything in this organization to get us to a championship level. But there’s also the human side to this business. That’s the part that I struggle with the most.”

Ujiri referred to DeMar DeRozan as the greatest player in Raptors history. But he called the man he was traded for, Kawhi Leonard, a top-five player in the league.

And therein lies the dilemma. To get a player like Kawhi, you need to give up something.

Supremely loyal to the Raptors, DeRozan expressed feelings of betrayal on social media following the deal.

“I had a conversation with DeMar at Summer League and I really want to leave it at that. We spoke. I think maybe my mistake was talking about what we expected going forward from him. Not necessarily talking about a trade, but what I expect from him going forward, and I think that’s where the gap was.”

Ujiri told DeRozan that there was nothing “imminent,” but of course life moves fast in the NBA. The Raptors went from being one of the teams in the mix for Leonard to the team quickly.

“If there was a miscommunication there, I do apologize to DeMar and his family and his representation.”

Apology accepted? Not quite. Here’s what DeRozan posted to Instagram not long after the press conference ended.

Thinking DeMar might not be ready to accept Masai's apology. pic.twitter.com/ChycL3Fj0x

After nine seasons in Toronto, this wasn’t the way anybody wanted to see DeRozan leave town.

“There’s no measure to what [DeRozan] has done. We appreciate him and I promise you that we’re going to celebrate him in the best possible way that we can as long as I’m here.”

But at the end of the day, Ujiri saw his options, and concluded that keeping the status quo wasn’t going to get his team anywhere.

“We’ve been doing this for how many years? You can’t continue doing the same thing over and over again. And when you get a chance to get a top-five player, which doesn’t come very often, I think you have to jump on it.”

Indeed, on paper the Raptors are unquestionably better.

A two-time Defensive Player of the Year and the 2014 Finals MVP, Leonard is a superstar unlike any the Raptors have ever had.

So why did Ujiri have to be so defensive about the move?

With one year left before he can become a free agent, most expect Leonard’s tenure in Toronto to last just one season.

Ujiri says he spoke to Kawhi and his representatives and everything has “gone well.”

But he knows he has a season-long sell job to make.

“I think there’s a lot to sell here. Our team, our culture, our ownership. We have everything here except a championship.”

With Leonard, they’re another step closer. For now.