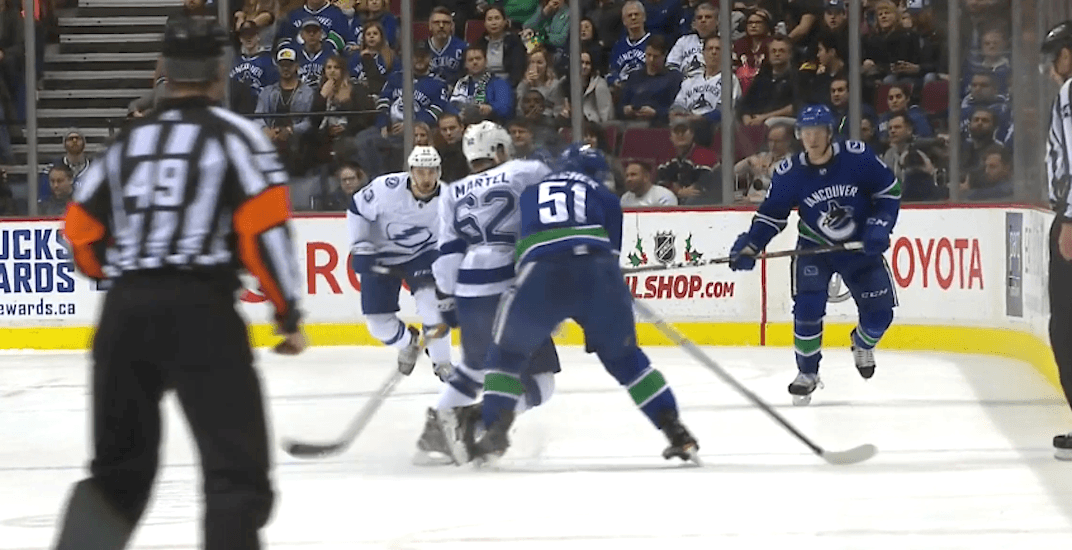 Martel will not have a hearing for his questionable hit, TSN 1040’s Mike Halford reports, meaning there will not be a suspension.

No hearing for Danick Martel for his hit on Troy Stecher last night, NHL spokesman confirms.

Martel approached Stecher from his blind side, meaning the Canucks defenceman had no chance to defend himself. Martel, who at 5-foot-8, was one of the few players in the game shorter than Stecher, exploded upwards into the hit. He grazed Stecher’s shoulder, but connected primarily with the Richmond native’s head.

“I thought it should have been a major,” said Canucks head coach Travis Green, who was livid with the call in the moment.

Martel received a two-minute minor penalty for interference, which is comical in itself because Stecher had the puck.

Here’s another look at the play:

Here’s a better look with the overhead angle:

A different angle of the Martel hit on Stecher #Canucks pic.twitter.com/qU5NkFEdLL

Stecher left the game with an injury, which most everyone assumes is a concussion.

The call should have been an illegal check to the head, as defined by Rule 48.1: “A hit resulting in contact with an opponent’s head where the head was the main point of contact and such contact to the head was avoidable.”

Stecher doesn’t move at the last minute, and didn’t see Martel coming. Martel is trying to get in front of him to avoid hitting him from behind, but clearly connects with Stecher’s head.

That’s the definition of “avoidable.”

Whether Martel meant to hit him in the shoulder or not should be immaterial.

Unlike when Elias Pettersson was injured in Florida, Canucks players didn’t miss this hit. They fought back.

Jake Virtanen was the first player to go after Martel after his penalty expired. Erik Gudbranson snuck in a sucker punch, which could have easily resulted in a suspension, leaving Martel bloodied.

A number of other players got involved as the game was out of control during the second period.

The Canucks got to within a goal in the third period and had chances to tie the game up, but eventually lost 5-2 against the best team in the NHL this season.

“That was a hell of hockey game,” Green said after the game.

The Canucks suffered just their second loss in the last seven games — the first in regulation. They play the St Louis Blues on Thursday and the Winnipeg Jets on Saturday before the World Juniors take over Rogers Arena.