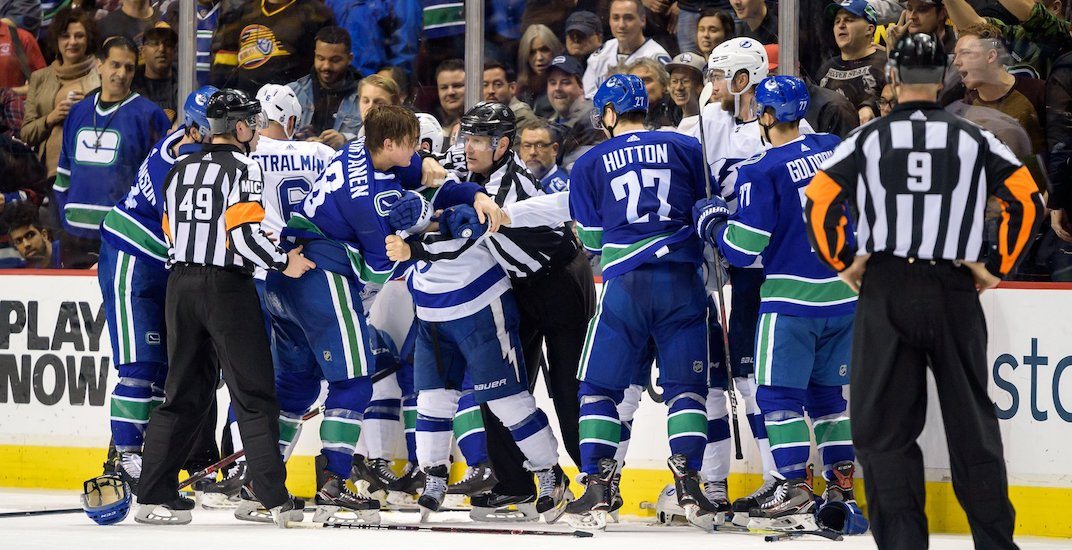 Nobody can say the Canucks don’t stick up for each other after this one.

The Canucks lost 5-2 to the Tampa Bay Lightning and they also lost Troy Stecher, but they didn’t go down without a fight.

Things got nasty late in the second period between the Canucks and Lightning on Tuesday night when Stecher was hit in the head by Danick Martel.

That was the end of Stecher’s night, and should have been the end of Martel’s as well, but the referee instead called just two-minute minor penalty for interference.

The Canucks were understandably pissed about that (a combination of losing Stecher and Martel still being in the game after, and maybe this too), and it didn’t take long for a response.

At the end of Martel’s very next shift, it was retribution time.

Jake Virtanen and Erik Gudbranson rolled in to deliver the goods to Martel, who’s listed at just 5-foot-8 and 162 pounds, and probably not too fond of their goods.

Gudbranson in particular landed a nasty uppercut near the end that cut Martel, making him bleed on linesman Michel Cormier, who wasn’t too happy about it.

Amazingly, Gudbranson avoided the penalty box for all that while Virtanen, Martel, and Josh Leivo all got roughing minors.

But that was far from the end.

Just a few minutes later Cedric Paquette made a late hit on Elias Pettersson, which served as an invitation for more rough stuff that the Canucks quickly accepted.

Brock Boeser jumped in with a headlock straight from the WWE.

This Canucks game has some bite to it tonight. Boys are playing hard and I like it. #oldschool @Sportsnet650

Paquette tries to drop the gloves with Boeser but he reaches for the tag and suddenly in flies Ben Hutton with right hooks to the Lightning forward’s face.

Meanwhile, Boeser and Anthony Cirelli are in some sort of weird wrestling match on the side.

Antoine Roussel is watching all this from the penalty box, serving a major from a fight with Yanni Gourde just before all this stuff started.

Things settled down in the third period, and the Canucks picked up an early goal on a Chris Tanev point shot to make it a 3-2 game. They couldn’t get another goal unfortunately and a late Steven Stamkos goal sealed the win for Tampa Bay.

Vancouver held the edge in shots 38-37 and managed to keep up with one of the league’s top teams, all while playing down a defenceman for almost half the game. Perhaps more importantly, they earned a lot of respect for the way they stood up for one another.

"I think we did a tremendous job sticking up for our teammate. I thought we did a great job battling tonight." – @BoHorvat after a hard-fought game against the Lightning. pic.twitter.com/Uws4yIQb0q

Pettersson had chances and made many great plays as always, but his point streak came to an end at seven games – one short of Pavel Bure’s rookie record.

The loss ended a streak of six games where the Canucks (5-0-1) had at least one point.

Halfway through this homestand the team is 2-1, with the St. Louis Blues – who the Canucks just beat 6-1 last week – in town on Thursday.