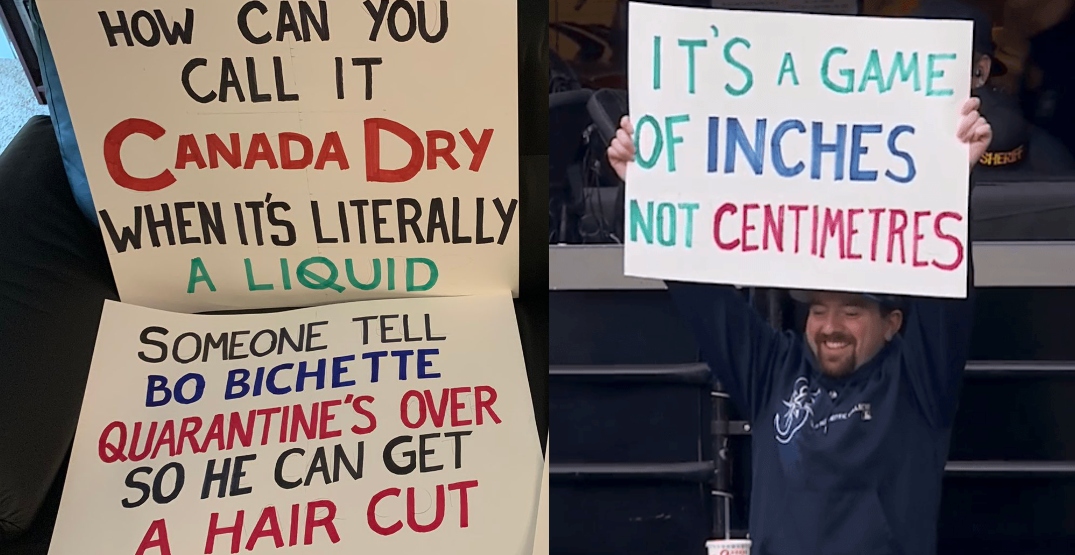 For the first time in eight years, Canada’s west coast invasion of Seattle Mariners games was silent (not including the empty stadiums last year).

Nature is healing and Mariners games at T-Mobile park look like home games again, not a giant party for visiting Blue Jays fans. Ordinarily, thousands of Blue Jays devotees from the prairies and British Columbia invade their AL West counterpart, but due to border restrictions that’s not the case right now.

Friday’s Blue Jays-Mariners game sounded much more like a mid-August M’s home game, rather than a getaway party for Blue Jays transplants. Despite the lack of support for the Jays, one loyal Mariners fan continues to defend his home turf against the invasion of Blue Jays intruders.

Over the last number of years, Daniel Carroll has become well-known for his good-natured signs, with clever ways of poking fun of fans north of the border. On Friday evening, he was back to his old tricks again with these signs, even bringing in a few new phrases for the 2021 season.

We now return to your regularly-scheduled roasting of Canada at the @mariners game: pic.twitter.com/VoTQExPS8o

“Not having Jays fans in the ballpark was relatively anticlimactic,” Carroll told Daily Hive. “It was nice in a sense because I felt like I could relax a little more, but all the jokes on the signs don’t hit the same without the context of the Canadian Invasion.”

This year, he added some new signs to the roster, including references to Bo Bichette’s long flowing mane, one of Canada’s finest soft drink exports: Canada Dry, and an obscure but clever reference to a Canadian cult classic children’s show, “Under the Umbrella Tree.”

“The Canada Dry one came to me relatively recently, and it fits my preferred style really well. That is, it’s a total non sequitur, it’s only barely actually related to Canada, and it’s a pretty simple joke,” Caroll said.

When he’s not attending T-Mobile Park as a Mariners fan, he’s typically working the music side of the game at WNBA games for the Seattle Storm. He’s also filled in for Seattle Mariners games as a backup, which means he’s worked more M’s games than he’s been to as a pure fan.

Judging by the type of crowd on Friday night, it was a night-and-day difference for this Blue Jays-Mariners series compared to previous years. Blue Jays fans really started flocking to Seattle en masse beginning in the 2013 season, and every year, it’s been like one giant Blue Jays party at “Rogers Centre West.”

Over the years, Carroll has amassed quite the collection of signs for these games against the Blue Jays, but his favourite sign of all time references the number of Americans who set foot on the moon versus the number of Canadians.

“It celebrates a cool thing that we did as a country that I can actually have some pride in (and Lord knows those things are few and far between), and it’s absolutely not a fair fight because it’s not like Canada was ever trying to put someone on the moon,” Carroll said.

All in all, he does this in good fun, and Carroll never takes it too seriously, even though some Blue Jays fans might take exception with some of the digs. But overall, everyone realizes it’s just good-natured ribbing between two fan bases.

Even from a Blue Jays supporters’ perspective, you have to respect the amount of research and time he spends referencing unique pieces of Canadian trivia.

“For the most part, people have always been pretty good sports about the signs,” Carroll said. “Every once in a while someone gets bent out of shape about it, and you can see a tiny bit of that in my mentions, but I probably wouldn’t keep doing it if the reaction overall wasn’t mostly positive.”

The Blue Jays and Mariners continue their three-game set at T-Mobile Park in Seattle, with the Mariners taking the first game via a rare walk-off walk. With both teams separated by a mere game in the Wild Card standings, these games are crucial to both Toronto and Seattle.

While there may be the odd smattering of US-based Blue Jays fans in attendance, it’s back to being a typical M’s home game for this highly anticipated series. And with both clubs in the thick of the playoff race, Mariners fans have never had so much to cheer for.