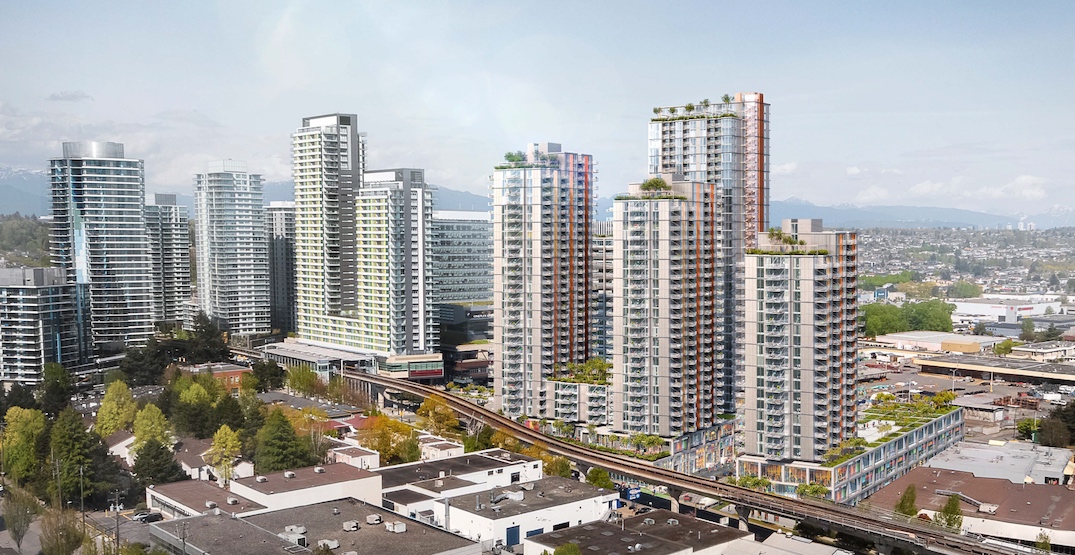 With the proposal for a second phase expansion of Marine Gateway, one of Metro Vancouver’s most successful transit-oriented developments could become even larger.

A pre-application enquiry has been submitted to the City of Vancouver to redevelop the Don Docksteader Motors’ Volvo and Subaru car dealership property immediately south of the existing Marine Gateway, and SkyTrain Marine Drive Station and bus loop.

Spanning five acres, this is a larger site than the existing Marine Gateway north of the bus loop.

There would be an even wider range of uses at Marine Gateway 2, including over 1,000 homes — a mix of 680 market rental units, 170 moderate income rental units, and 203 below-market ownership homes. 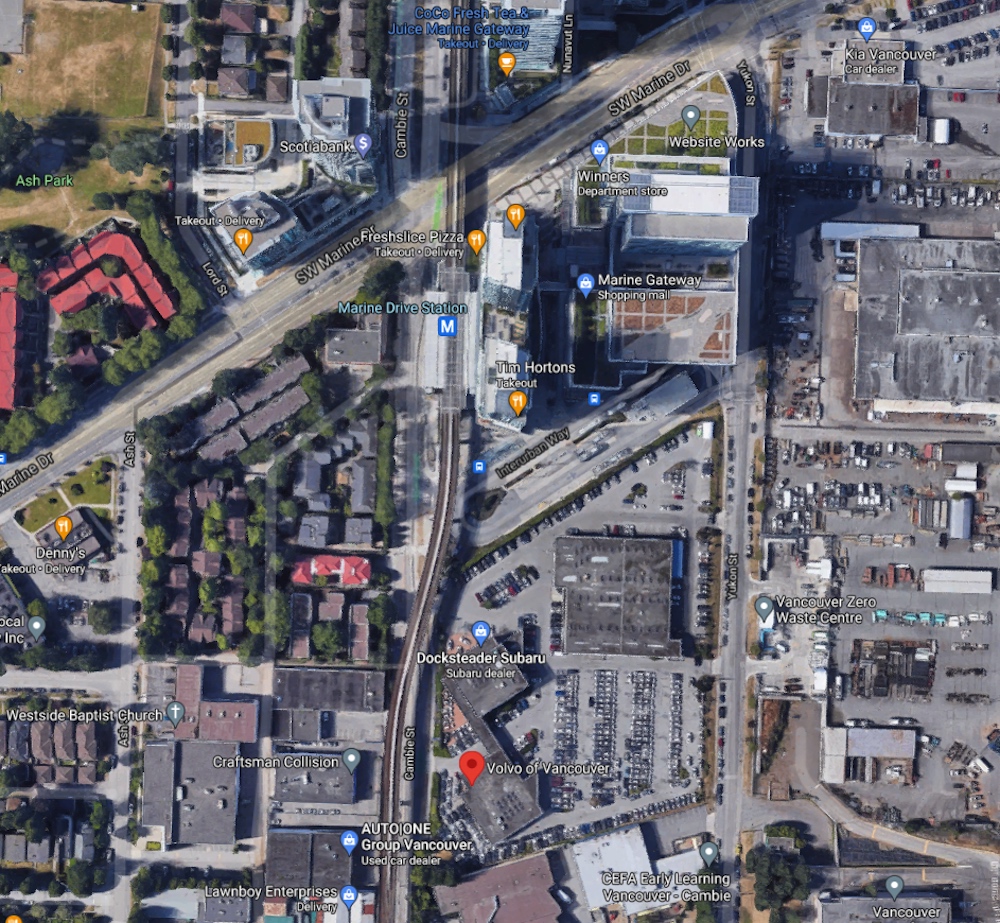 “Marine Gateway 2 is a unique opportunity to support local and regional economic, housing, sustainability and transit priorities, while building on the success of Marine Gateway,” said Tim Grant, president of PCI Developments, in a statement.

“We look forward to working with the City and other government stakeholders to bring forward this significant addition of industrial, office and retail space, along with market and below-market rental and affordable home ownership housing, all directly integrated with existing rapid transit station and bus loop.”

Raymond Kwong, the provincial director of BC Housing’s HousingHub, a program that catalyzes affordable homes for middle income households, states the location and proposed housing mix would make Marine Gateway 2 an “excellent candidate” for the provincial government’s affordable rental and home ownership programs. More specifically, the developer is aiming to provide over 200 homes through BC Housing’s Affordable Home Ownership Program.

The physical form of the project entails five towers, including four residential towers, plus an office tower at the northeast corner.

The public realm spine of the existing Marine Gateway would be extended southwards. A wide pedestrian bridge would span over the bus loop as a continuation of the retail high street into Marine Gateway 2, and enable convenient access to the SkyTrain station. 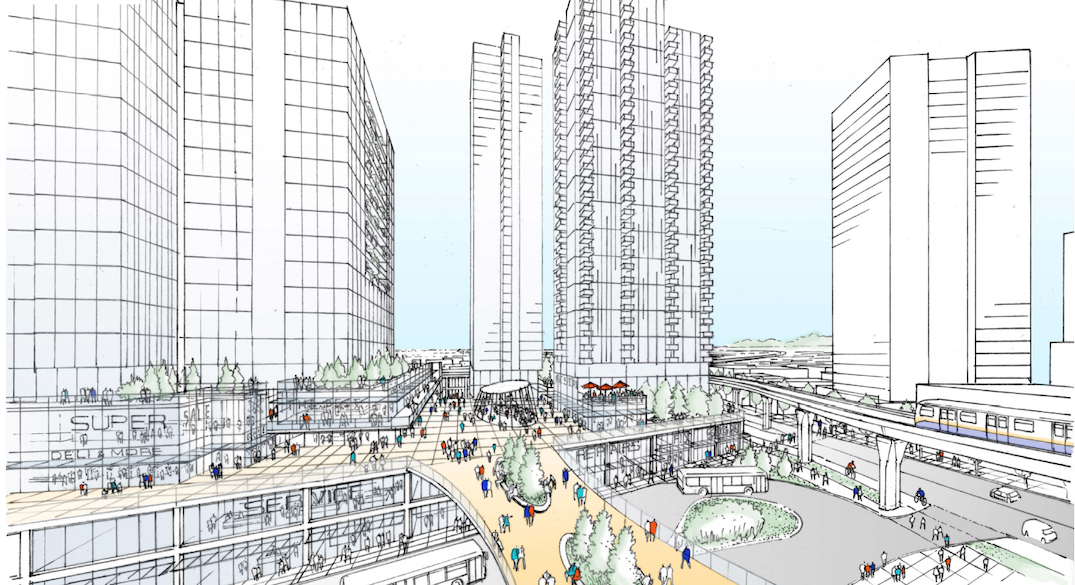 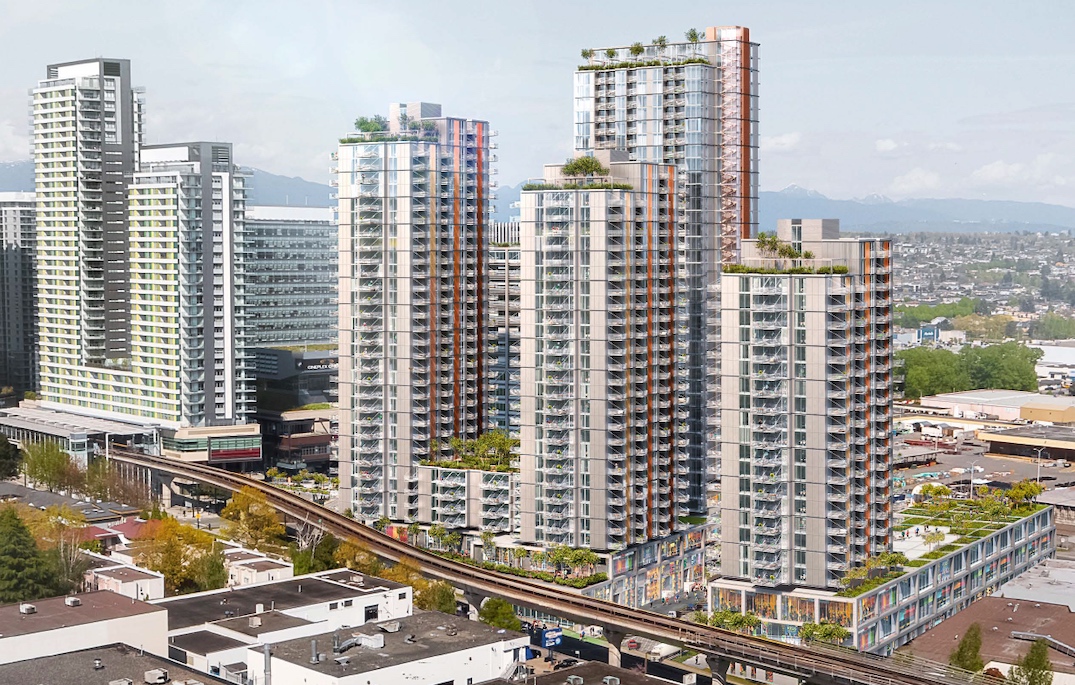 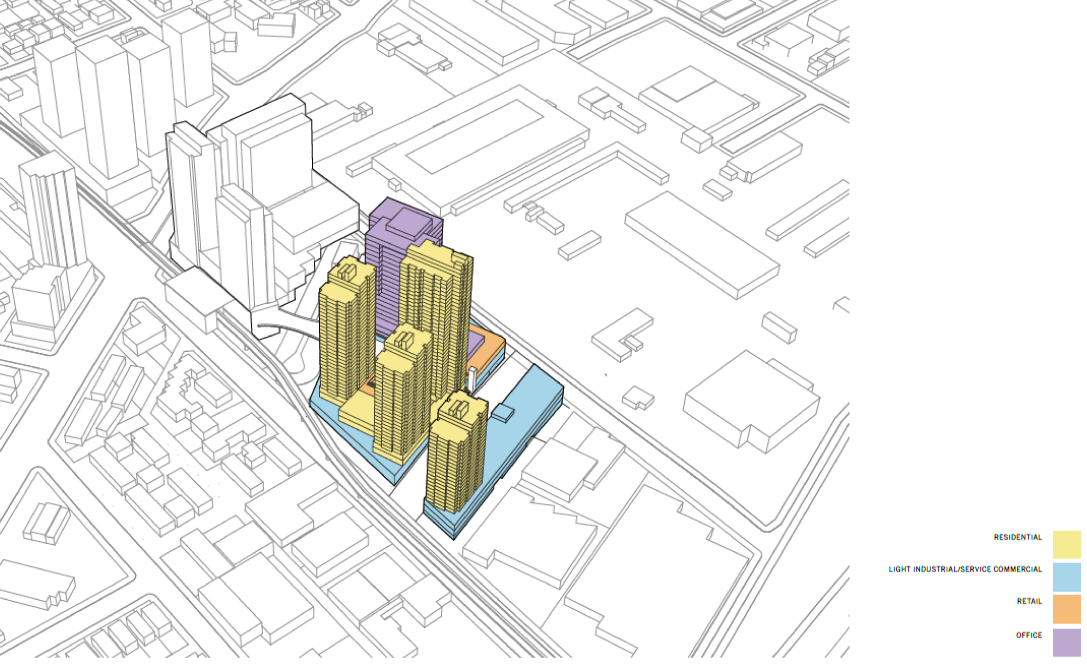 With thousands of residents and over 1,800 office workers, Marine Gateway 2 would provide the transit hub with a significant increase in ridership.

Completed in 2015, Marine Gateway has two residential towers and an office tower. It includes 415 condominiums, 46 rental apartment units, 260,000 sq ft of office space, and 230,000 sq ft of retail space, with tenants such as Cineplex, T&T Supermarket, Winners, Steve Nash Fitness World, and various restaurants, services, and smaller businesses. The opening of Marine Gateway and its businesses is estimated to have added 5,000 passengers per day to the SkyTrain station.

The proposal for Marine Gateway 2 is coming forward now, after Vancouver City Council approved sweeping changes in July 2021 that directed city staff to accept and review a wider range of applications that may not comply with existing city policies, but provide significant new affordable housing and economic opportunities. According to the city, it received a total of 70 enquiries on proposals that are deemed non-compliant with city policies.

In the case of Marine Gateway 2, the development site is on industrial land, and the proposed uses are greater than what was anticipated in the Cambie Corridor Plan.

But over the past year, the city has indicated it is willing to consider more ambitious, higher density transit-oriented developments around Marine Drive Station, beyond what is prescribed in both the Cambie Corridor and Marpole Community plans to optimize the area’s close proximity to transit infrastructure.

This is made evident by Intracorp Homes’ submitted rezoning application to redevelop the Ashley Mar Co-op at 8495 Cambie Street immediately west of Marine Gateway with three towers — 16, 27, and 31 storeys (up to 304 ft; 93 m) — into 649 market and below-market rental homes.

Further to the west, the Denny’s restaurant site at 622 Southwest Marine Drive could be redeveloped by Chard Development into 28- and 32-storey towers (up to 335 ft; 102 m) with 573 market and below-market rental homes.

Following approval, construction on Marine Gateway 2 is expected to be complete within four years.

These three redevelopments would also serve to provide an even stronger visual urban gateway into Vancouver for visitors arriving from the Canada Line. 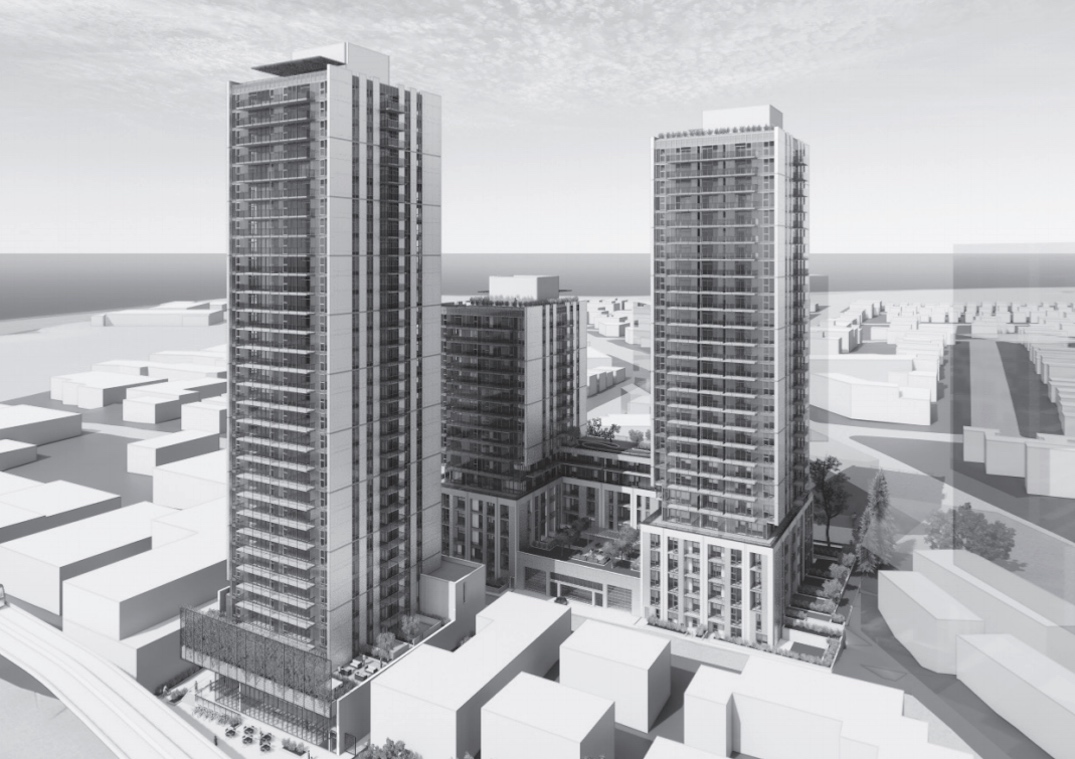 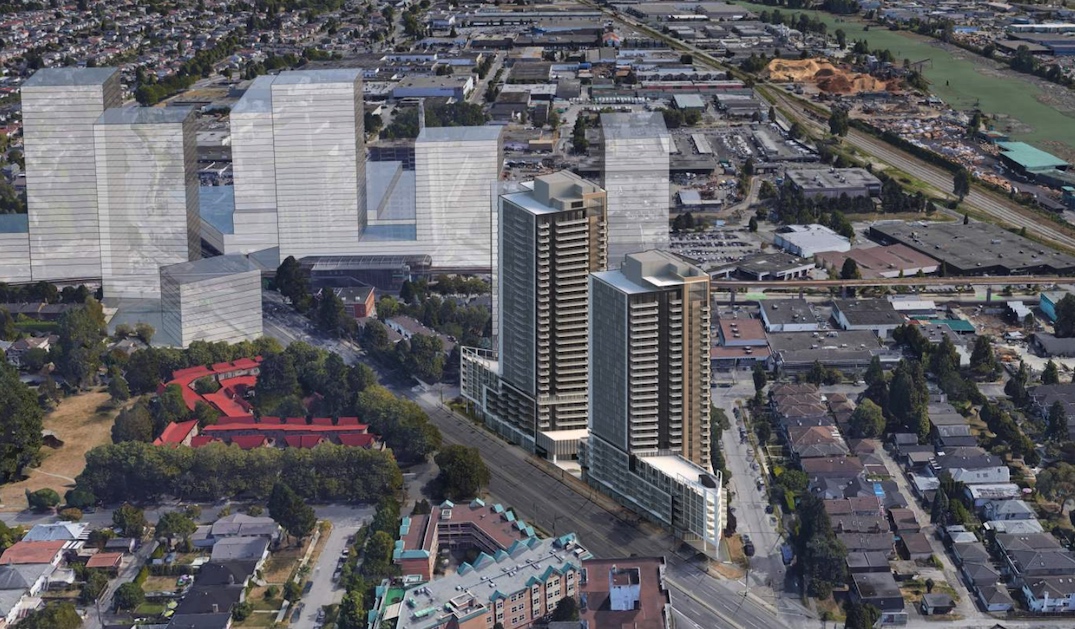