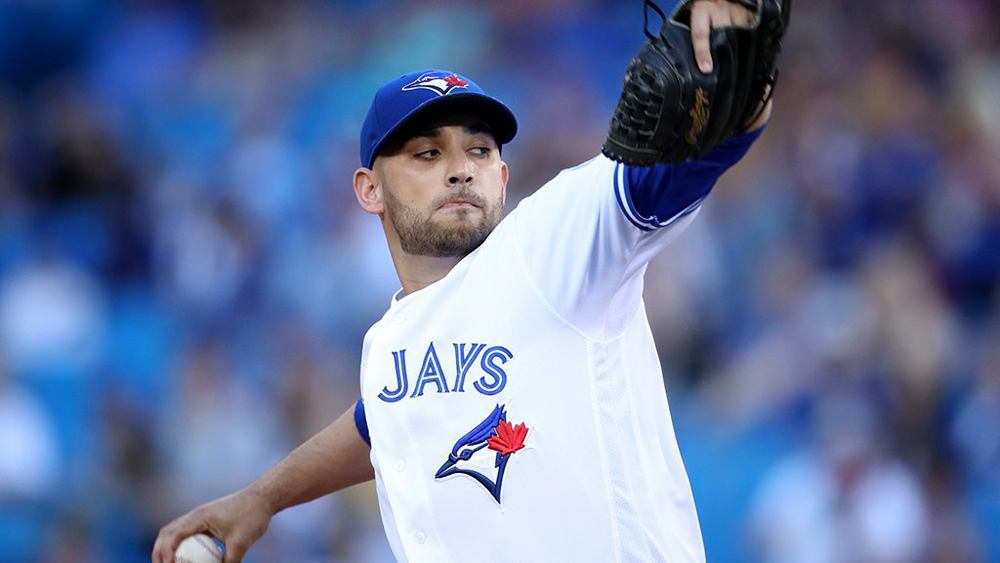 Nobody on the Toronto Blue Jays has had more of a roller coaster season than Marco Estrada.

He entered the 2017 campaign as one of the Blue Jays’ most reliable starting rotation arms. After a rocky June and July (in which he pitched to a sky-high ERA of 9.52 in nine starts), Estrada is beginning to look like his old self again.

It may be too late to help the Blue Jays make the postseason, but that doesn’t mean Estrada can’t help another team enjoy the sweet nectar known as “October baseball”.

After his latest start – seven shutout innings against the New York Yankees – Estrada may have just pitched his way into a trade out of Toronto.

It’s a small sample size, but Estrada’s last three consecutive outings (all seven inning outings with no more than three earned runs surrendered) are a much closer facsimile of the pitcher who’s spent the past two-plus years in a Blue Jays uniform.

Heading into the July 31st non-waiver trade deadline, Estrada had practically no value on the trade market. I said the Blue Jays should take whatever they could get for Estrada and his teammate Francisco Liriano. The Blue Jays took on some salary from the Houston Astros, but the Jays parlayed Liriano into a tangible prospect.

However, the Jays were unable to move Estrada; a pending free agent. Leading up to July 31st wasn’t the right time to deal Estrada; but now that he’s built up some trade value, now is the best time to pull the trigger on a deal involving the veteran hurler.

That's a SHUTOUT and a SERIES WIN to open our HOMESTAND!

Players need to clear waivers in order to be traded within the month of August, but Estrada would certainly clear waivers and that would open up dialogue with teams in need of a starting pitcher for their playoff push.

There are still plenty of teams out there looking for an arm: the Houston Astros and Seattle Mariners immediately come to mind. Those clubs are in desperate need of starting pitching – why not call the Blue Jays and see what it would take them to send over Mr. Estrada?

It’s been fun to watch Estrada’s turnaround as of late, and as nice of a feel-good story as it is, the Blue Jays’ odds of making the playoffs are incredibly slim. Estrada doesn’t mean much to an out-of-contention Blue Jays team. At this point, he’s much more valuable as a trade chip.

Keep this in mind; don’t expect any grandiose return if the Blue Jays were to trade Estrada. Like I mentioned earlier, whatever the Jays can get back is a bonus at this point. And the better Estrada continues to throw in the month of August, his trade value increases incrementally.

Here’s where the Blue Jays need to be careful; if Estrada goes out and gets lit up in his next start, any sort of momentum or trade value the Blue Jays built up suddenly comes tumbling back down. Right now, contending teams are likely monitoring Estrada from start-to-start and simply hovering over the “trade” button.

As up-and-down as Estrada’s 2017 season has been, most clubs have seen enough lately to convince themselves that June and July was just an anomaly and the most recent iteration of Estrada is much closer to the “real” him.

Hypothetically speaking here … say the Blue Jays do find a suitor for Estrada and trade him within the next few weeks. That doesn’t necessarily close the door for a reunion with the Blue Jays and their beloved soft-tosser. The team could always bring back Estrada and re-sign him as a free agent, much like they did two winters ago.

Estrada pitched so well on Thursday against the Yankees that he may have sealed his ticket out of Toronto and assured himself a spot with a contending team. But that may end up being a round trip ticket, which could bring Estrada back to the place where he blossomed into a household name: Toronto.