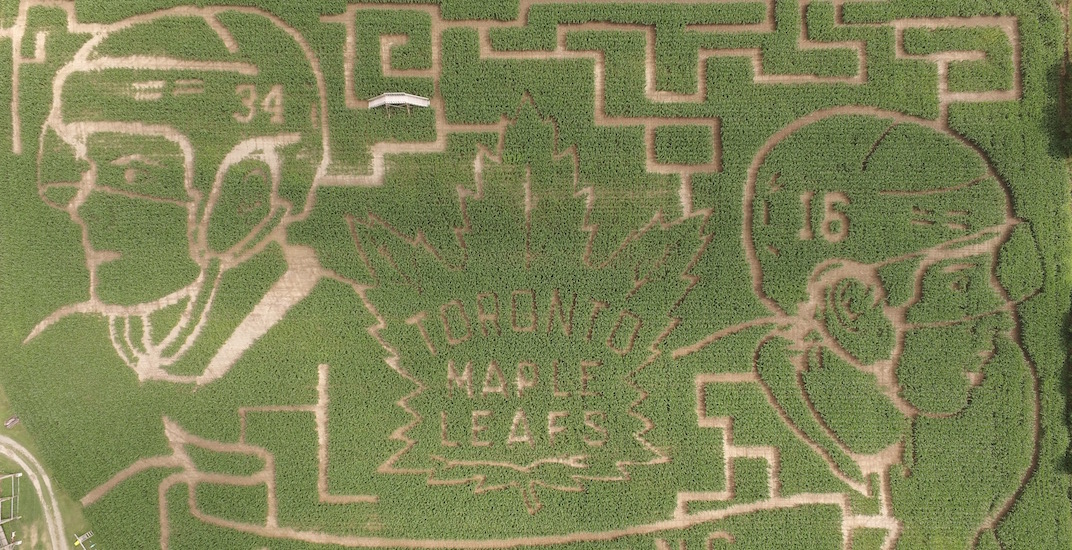 “The promise of what’s to come.”

That’s how the folks over at Hunter Brothers Farm referred to their Toronto Maple Leafs corn maze, depicting the faces of young stars Auston Matthews and Mitch Marner.

The maze also features a giant Maple Leafs logo and the words “100 seasons,” for the team’s anniversary season.

This isn’t the first larger-than-life corn maze from the farm in Florenceville-Bristol, New Brunswick. It’s their 17th annual design and the sixth with a Canadian sports theme.

Other past designs include Terry Fox, the Beatles, Sesame Street, and the Alberta/Saskatchewan Centennial.

As you can imagine, designing a giant work of art like this is no easy feat.

“Once we decide on the theme, we have a graphic designer draw up the maze,” Hunter Brothers Farm explained on their website. “Once we are happy with the image our survey engineer plots GPS coordinates for the design on his computer. The 6-acre field is prepared and planted in a crisscross pattern to fill out the canopy. The surveyors then come in and lay out the design in the field using GPS and flags.

“The Hunter crew, equipped with a small sprayer, goes in and removes the corn which needs to be ‘erased’ to make the paths. After several days of work making the trails we use a small drone to inspect the maze and fix any small mistakes.”

You can actually visit the maze, which is lined with trivia questions related to theme, if you’re ever in Florenceville-Bristol.