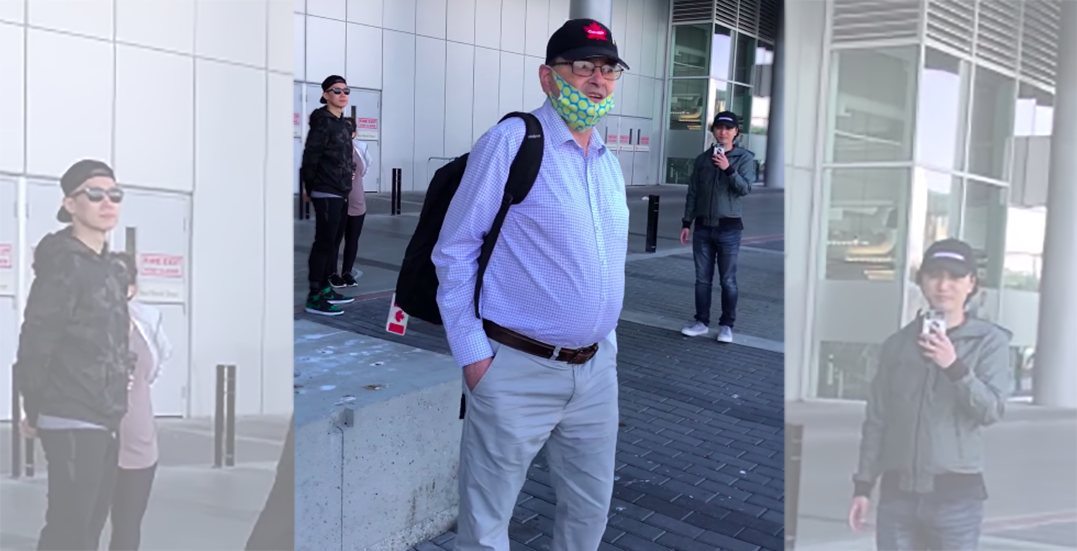 A group of friends is speaking out after a tense exchange with a stranger who set off on an anti-Chinese rant.

Carol, who didn’t want her last name shared, told Daily Hive that she and her friends were waiting for lunch at the Vancouver Convention Centre, when they were approached by a man. She said he quickly began ranting and sharing his anti-Chinese views.

“We were just minding our own business at Waterfront waiting for lunch,” she said in a Facebook post. “He came up to us to start ranting about China.”

Carol said that right off the bat she “wanted to shut down the conversation” by telling him that no one in her group was from China. The man allegedly wouldn’t leave them alone, which is when she and her friends began filming the exchange.

“But you understand, it’s a little bit sensitive right now when we are picked out just because we look Chinese,” she tells the man.

“We’re frigging mad,” he replies, adding that he is from Richmond.

“When the Chinese immigrate, that’s a conscious decision, right? They immigrate here, they learn English, they accept Canadian culture, and they act accordingly, right?” he says. “They don’t change Richmond or wherever else they go into Little China.”

He continues, “That’s not only racist but that’s a form of segregation. We expect them to learn English, and we expect them to blend into the Canadian culture. They are no longer in shing ging or bing bing or ding ding – whatever you want to call it.”

One of Carol’s friends interjects again, voicing his discomfort from the exchange.

The video transitions to another captured clip, this time showing several bystanders approaching as the man continues to yell.

Carol and her group ask why he’s picking on them and continue to ask him to leave.

“We didn’t talk to you at all,” says one of Carol’s colleagues. “You just came up to us and ranted about how angry you are.”

The man then brings up former diplomat Michael Kovrig and businessman Michael Spavor, saying that the two Canadians were detained in China “void of due process.” He adds that he’s a lawyer and a graduate from the University of McGill Law School.

The man can then be seen walking away after being asked for his name and the law firm he belonged to.

Carol says that while she’s thankful for the bystanders who stepped in, she’s also using the experience as an opportunity to learn and “do better in the future.”

“In retrospect, I could’ve done better, as it doesn’t matter where I’m from,” she told Daily Hive. “It is not okay for him to pick us out and harass anyone based on their racial appearance. I should’ve shut it down, not deflected.”

She adds that while she thought about reporting the incident to the Vancouver Police Department (VPD), there wasn’t an available option on the online non-emergency report.

“There wasn’t any option to report this kind of harassment,” she said. “It wasn’t a hate crime, he wasn’t physically aggressive, and we weren’t assaulted. But his behaviour wasn’t welcome and he did pick on us just because we look Asian.”