Located in the former Prohibition Brewing and Caché space on Hamilton, Malt & Marrow is headed by Tony and Lisa Chan, a father-daughter team who honed their food biz chops in the Okanagan, with a pair of Chinese restaurants. They brought on seasoned local chef Kai Leitner (Lily Mae’s, C Restaurant, Bistro Pastis), who drew on his own heritage to create and execute a menu of hearty flavours prepared with local ingredients.

The food at Malt & Marrow spotlights dishes from Germany, Sweden, an Poland. Leitner says his grandmother was a significant culinary influence from an early age. Drawing on traditional recipes and prep methods, Leitner and the Malt & Marrow crew are making just about everything in house, including their own sauerkraut, jerky, smoked cheese, and more. 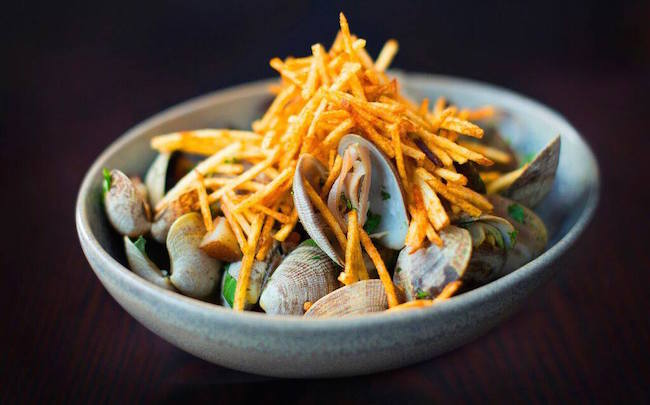 Leitner urges first-time diners to get a sense of Malt and Marrow through dishes like the grilled marinated salmon belly, housemade beef jerky, the duck breast (with spiced sauerkraut, goat cheese pierogi, and caramelized onion puree) and the schnitzel with pretzel spaetzle (with kraut slaw).

The Chans are excited to be stepping into the Vancouver dining scene and presenting their more refined and regionally-influenced take on the gastropub (hence their term “gastrolounge). Sourcing from local suppliers and melding British Columbia’s ingredients with techniques of Northern Europe is what Malt & Marrow hopes sets them apart. Further, Leitner notes that the fresh seafood and produce of B.C. will infuse the more typically heavy dishes of Northern Europe with a west coast kind of lightness.

Malt & Marrow is open for lunch and dinner, and offers Happy Hour and late-night dining specials.