Canadians are apparently on board with the federal government’s June 18 decision to re-approve construction of the Trans Mountain Pipeline Expansion Project.

The majority of respondents to a recent Angus Reid Institute study felt that way, at least, as 56% stated that they approved the twinning of the pipeline running from northern Alberta to Metro Vancouver’s shores that would increase daily shipping capacity by 590,000 barrels.

Justin Trudeau announced his government’s green light of the project after it was halted indefinitely by a Federal Court of Appeal ruling last August, a ruling stating that additional work needed to be done relating to both the National Energy Board’s report and the government’s Indigenous consultations.

“That’s exactly what the Federal Court of Appeal told us last August,” Trudeau said during the announcement. “For this pipeline to be considered, we needed to do better… they were right.”

The Angus Reid Institute carried out an online survey shortly after the announcement, polling 1,842 respondents between June 18 and 20.

The survey found that 56% of respondents believed the federal government had made the right decision regarding the re-approval of TMX, while only 24% thought the opposite.

A full 21% of respondents were on the fence, stating that they were not sure/couldn’t say.

Unsurprisingly, Alberta was the province that saw the largest amount of support for the decision, with 85% of Albertan respondents being on board with the re-approval and only 4% stating that they were against. 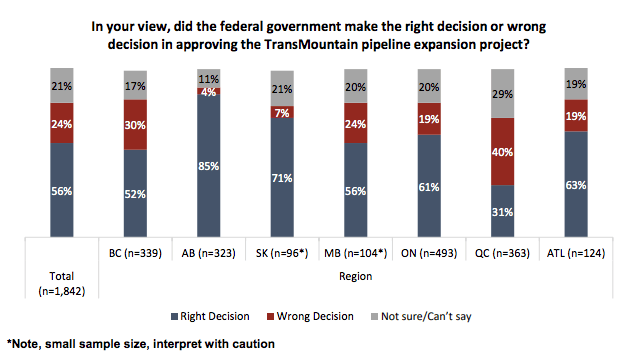 Quebec was the province the most against the decision, as 40% of Quebecois respondents called it the wrong decision, outweighing the 31% who were on board with it.

BC’s provincial government has long been in contention with their eastern neighbour over the pipeline they’d potentially be sharing, though only 30% of West Coast respondents were fully against the decision. That left 17% who were not sure and 52% in support.

When looking at supporters/opposers along party lines, Angus Reid found that Conservative and Liberal voters were much more likely to have seen it as the right decision in comparison to NDP and Green supporters.

Only 59% of those surveyed believed the project would eventually be completed, according to Angus Reid, with BC actually surpassing Alberta in that regard at 69% for — tied for tops with the Atlantic provinces.

Saskatchewan was the most doubtful about the future of the project, with just 49% thinking it would be built and 16% believing it would never be completed. 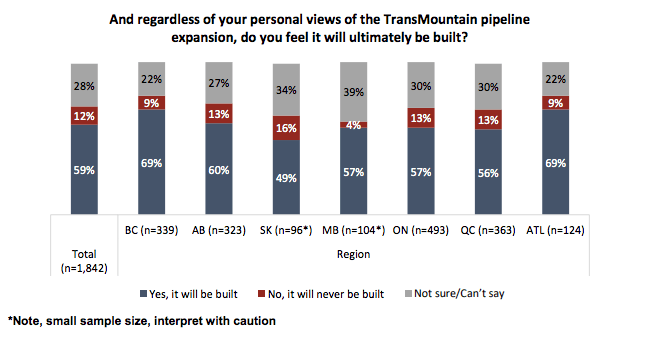 In addition to the federal government’s approval, the project still requires hundreds of permits and other approvals before construction can go ahead, and over two dozen hearings must occur before officials can sign off on some parts of the route.