A true story of a Vancouver company starting from a shared desk and now breaking multi-million in revenue a year. A Thinking Ape’s story began in Silicon Valley’s Y-Combinator and became something so much more.

I had the opportunity to sit down and chat with two of A Thinking Ape’s top founders Eric Diep and Kenshi Arasaki. The two along with Wilkins Chung are the founders of “A.T.A.” and manage the entire business. I’ve met a lot of businessmen who are very successful, but Eric and Kenshi are different by the way they project themselves. This is a direct contrast to executives like Linden Blue of General Atomics and Scott Morris of Avista Corporation. They have an ability to trail blaze rather than coagulate, a sign that they will do very well in war time.

A Thinking Ape now has 50+ full-time employees with offices in Vancouver and frequent operations in Seattle and San Francisco. ATA is one of the most successful social gaming companies in Vancouver. They are also previous tenants of The Network Hub, a place I think will be known to spawn future empires. ATA won’t reveal, but they hint that their revenue is currently within the $10-20 million range. The founders have created a culture that, by Eric’s definition, is much like a “node structure”. Instead of leadership, they emphasize ownership. To them, this is a key trait of a highly intelligent team. And they are relentless to show you that their engineers are among the most intelligent in Vancouver. 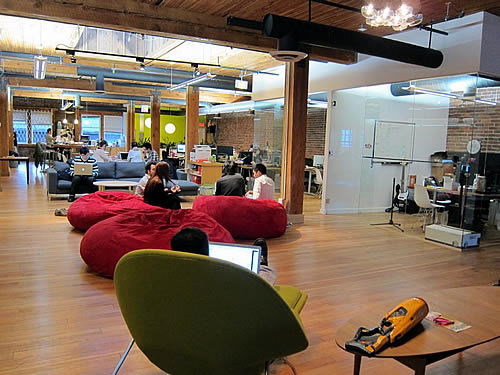 ATA is still young, but I see many qualities in culture that are similar to Google in its early years. ATA has just taken over a new floor in their building and the new architecture screams horizontal structure. Glass windows replaced old walls and spaces were designed to float ideas. It might have also been more cost-effective, but that’s my speculation and probably a benefit of such design. You’ll also notice ATA’s tendency to hire the entrepreneur types, another quality similar to Google’s early days.  Eric explains they plan to encourage employees to start their own companies when the time is right. Only time will tell if they, too, experience the same talent issues that Google had a few years ago. They assure me a loss of intellectual capital is not a concern. 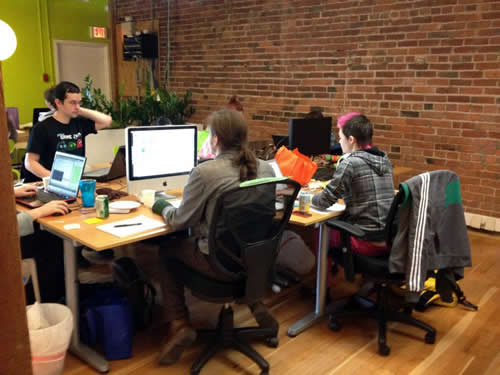 A Thinking Ape didn’t start in Vancouver. But you can rest easy because it made it big in Vancouver. ATA is the product of Y-Combinator, a very successful incubator in the “Valley”. ATA’s founders decided that the culture of San Francisco was not meant for building long-term successes because of high churn of engineers moving from company to company, everyone seeking a short-term profit. So the two decided it would be best to move to Vancouver. They described Vancouver as a creative community with lots of talent (but we knew this already). I also wouldn’t be surprised if an immigration permit expired and forced a move-back, but that’s not the focus here. What’s most interesting is that a Valley company came to Vancouver. I’m blushing.

I love outlier statistics, and I love American thinking coming to Canada even more. Kenshi and Wilkins are products of Amazon and Vancouver is lucky to be blessed by their presence. I often consider most Vancouver investors and businessmen too old school, and too greedy for their own good. Such short-sightedness often leads to ignorance, lack of lust, and creates strange Venture Capitalists who become patent trolls derived from extracting intellectual property from weak founders. Perhaps such obsession with material wealth is what drives the complex in the North Shore. Nonetheless, ATA’s thinking is very refreshing for Vancouver culturally and economically.

ATA is still thriving on its angel funding from their original venture, Chaterrous. They added a gaming layer when they detected a trend in their chat platform (and couldn’t entice other social gaming companies) and made a hit out of their first product Kingdoms At War. Vancouver is again blessed by their emphasis for the platform not one-offs. For those out there who are not techies but like business, you need to pay attention to the strategies that ATA adopts. Pushing your business platform will drive your empire.

Kenshi confirmed to me that ATA did participate in the program Made In Vancouver. Although he refused to speculate on its potential, it did relieve my concern that the good companies would ignore the program. Kenshi explained that in the bigger picture Vancouver needs a very big success story to drive our future potential. A company going multi-national would do wonders to shift the gravity towards Vancouver. Kenshi  further explains that getting there requires Vancouver to think about being Vancouver and not pitting itself against Silicon Valley. He cites New York’s rising tech industry as an example and the founding of companies like Foursquare. At this point in conversation I really felt Kenshi’s own primal desire to build his empire.

Making Millions, But Still A Startup

I had two days to spend at ATA headquarters and even though I was thoroughly impressed I still saw some lingering signs of a start up. Everyone still takes on many different roles and the extra required work sometimes showed on the staff. It’s a company without designated public relations roles, excessive support staff (like those excessive HR and accounting people you see else in other companies), and a lot of the new hires are young grads. However, this is normal and positive. If they grew this much and already had a lot of overhead I’d be worried.

I noticed much of the start up life in both Kenshi and Eric when I talked about their opportunities and limits. ATA does not foresee any product saturation in the near future partly because they are still growing and seeing big opportunity overseas. I picked up on a unique detail in their demographics: Asian users are using a lot of their product even though they don’t know English! Kenshi explained that it doesn’t matter the language because their users create the content for them in their unique social layer. He went on to say that ATA hasn’t even begun to think about specifically targeting different countries, which means there’s a lot more growing for them to do.

If you didn’t know, A Thinking Ape has indeed done acquisitions. Kenshi confirmed that ATA has acquired one local gaming studio, and I get the hint there are more on the way. This is the sign of a budding anchor company. ATA could do wonders for the Vancouver economy if it continues acquisitions because this will encourage more opportunity for local startups. Kenshi also explains ATA recruiting is not limited to Vancouver, and the company is working to bring more talent from abroad.

When my time with Kenshi and Eric was finished, I got my last look of budding success. Before I left the comfort of the third floor, Eric and Kenshi showed me the new centerpiece of the room. A brand new ping pong table is a luxury a typical startup cannot afford, and this is when I knew ATA was on to big things. I left watching Kenshi and Eric begin a long battle of their paddles, and felt more optimistic about our startup community.