While the provincial government still has not revealed an exact date as to when ride-hailing services will officially launch in BC, Lyft has now unveiled what its pricing structure will look like once its services begin.

“Lyft is sharing its rider pricing so Metro Vancouverites can get a better understanding of what they can expect when service begins,” Lyft said in a statement to Daily Hive.

Lyft said its base fare will be set at $2.50. The cost-per-kilometre will be 65 cents, and the cost-per-minute will be 33 cents. There will also be a service fee of $2.50. Added up, the total base cost of using a Lyft in Metro Vancouver will be $5.

To put this in perspective, a ride from downtown Vancouver to downtown Richmond — based on Google Maps — including the base fare, cost-per-minute, and cost-per-kilometre will work out to approximately $24.65. 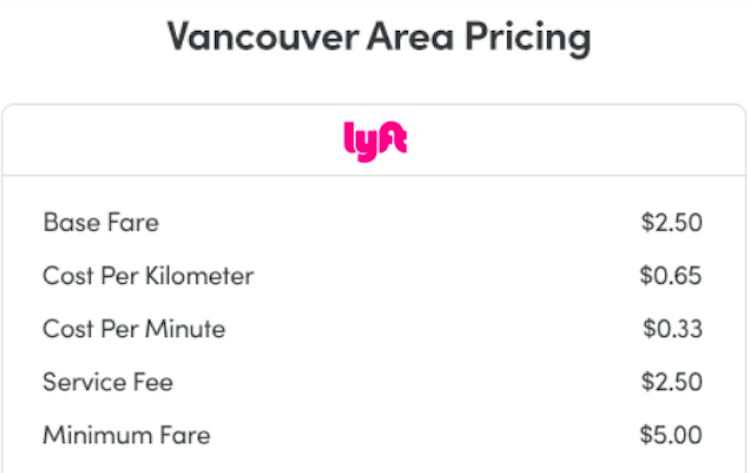 The unveiling comes after the Mayors’ Council on Regional Transportation passed a motion today that will establish first an interim region-wide ridesharing licence by the end of January.

In the meantime, Lyft still needs the Passenger Transportation Board to approve its application.

Once Lyft receives its provincial licence, “the company will work to secure the applicable municipal licences and then be ready to launch the service.”