The Vancouver Canucks have launched an online auction to sell Roberto Luongo’s goalie gear from a game he never played in: the Heritage Classic against the Ottawa Senators at BC Place in March 2014.

Former coach Joan Tortorella made the controversial decision to start Eddie Lack instead of Luongo, a move that helped motivate Luongo’s resolve to leave the Canucks and return to the Florida Panthers after eight seasons. Earlier this month, Luongo confirmed what many had already speculated: he told reporters that he would probably still be a Canuck if he had played in the game.

The franchise announced today they have placed Luongo’s Vancouver Millionaires-themed Heritage Game gear up for auction in support of the Canucks for Kids Fund, which benefits the Canuck Place Children’s Hospice, the Canucks Autism Network and BC Children’s Hospital Foundation.

The start of the auction coincides with tonight’s game in Miami against the Panthers. Luongo took the opportunity to fire back (half-jokingly) on Twitter this morning when the Canucks tweeted out their auction announcement:

@VanCanucks @Canucksforkids great deal here for a great cause! Plus they’re like brand new, never been used…….

A total of 25 items and non-Luongo related experiences are being auctioned off for the Canucks for Kids Fund.

This includes Luongo’s Heritage Game blocker, glove and pads as well as Autographed Hockey Fights Cancer warm-up jerseys (worn by each Canucks player before their game on October 26) and suite packages for games against the Pittsburgh Penguins on February 7 and the Toronto Maple Leafs on March 14.

At the time of publication, Luongo’s gear has received several bids of between $601 and $1,500. To view the auction items and submit a bid, click here. 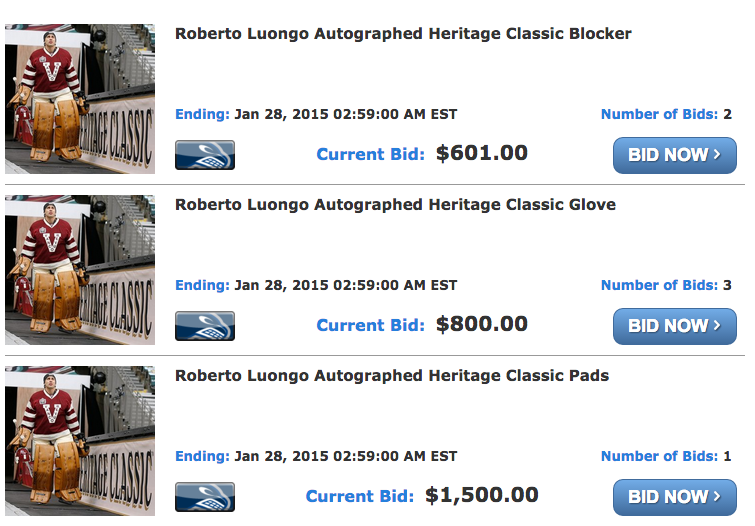