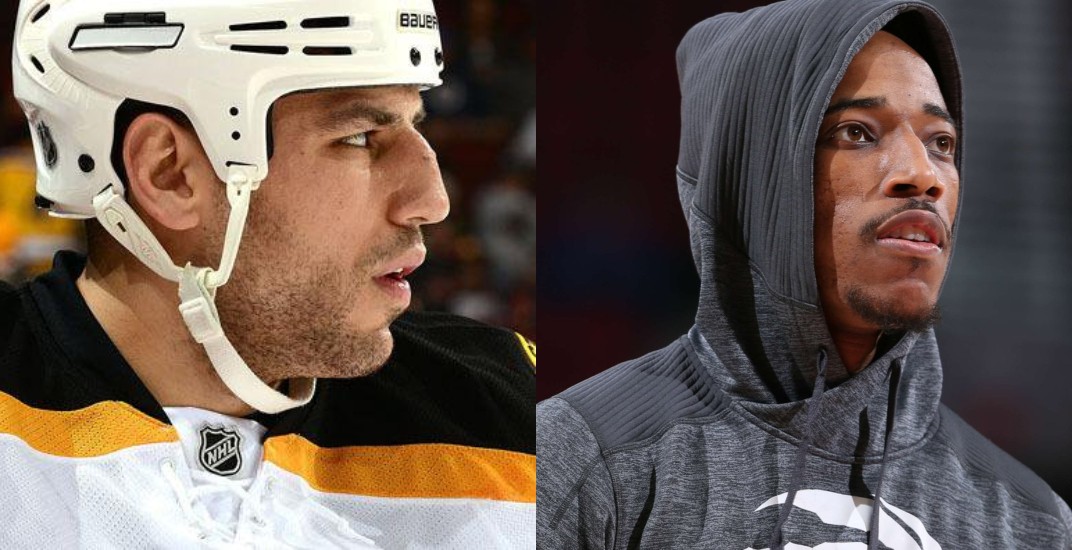 One of the toughest players in the NHL, Milan Lucic was pulling no punches on a recent appearance on Barstool’s Spittin Chicklets podcast.

Lucic spoke about many things in the interview, from breaking into the NHL as a 19-year-old, to the fallout with Vancouver fans following the 2011 Stanley Cup.

When the topic of his trade from Boston to Los Angeles came up, the interviewers compared his situation’s to DeMar DeRozan’s.

“He’s being like a little bitter bitch at the organization for trading him for Kawhi Leonard, like literally a top-five player in the league,” Lucic said.

Now a member of the Edmonton Oilers, Lucic wasn’t offended in the least when he was dealt from the Bruins, a team he played eight seasons with, to the Kings in 2015.

“At the end of the day, it’s a business. Unless you’re Crosby or McDavid or LeBron, you’re just another player.

“For me, I understood that they were trying to go in a different direction. How could I be bitter?”

DeRozan never won a championship with the Raptors, but played nine seasons in Toronto.

And he is most certainly bitter.

DeRozan loved Toronto. The fact that he’s disappointed in going to a well-run organization like San Antonio, provides extra testament to that fact.

But the way he’s expressing his emotion is totally against hockey culture. NHL players are accustomed to not rocking the boat, even when the boat should be rocked.

DeRozan spoke out immediately on Instagram when news of the trade first began surfacing. He later clarified that he felt like he was lied to by Raptors President Masai Ujiri.

“I felt like I wasn’t treated with what I sacrificed for nine years, with the respect that I thought I deserved,” DeRozan told ESPN.

“When I hear [DeRozan] talk about the bitterness and the disrespect and all that type of stuff, it’s like, you didn’t get traded to frickin’ Cleveland. You got traded to San Antonio, that’s a team that competes for a title every single year. And you get to be coached by the Bill Belichick of basketball with Gregg Popovich,” Lucic reasoned.

“And now you feel like you’re being disrespected? Come on, man. You’re still making 30 million dollars a year, living in San Antonio with no state tax. Give me a break, man.

“Nobody feels bad for you. Fuck off.”