There’s chocolate…and then there’s chocolate. A new “bean-to-bar” chocolatier, ChocXO, uses some of the world’s best cocoa beans to make their delicious chocolate, and at their Richmond café, you can get an up close look at how it’s done.

When it comes to chocolate, there’s the stuff that goes into about 85% of the world’s candy bars and hot cocoa mixes, and then there are the beans that begin their global journey on small family farms in Central and South America, grown with flavour and quality in mind. 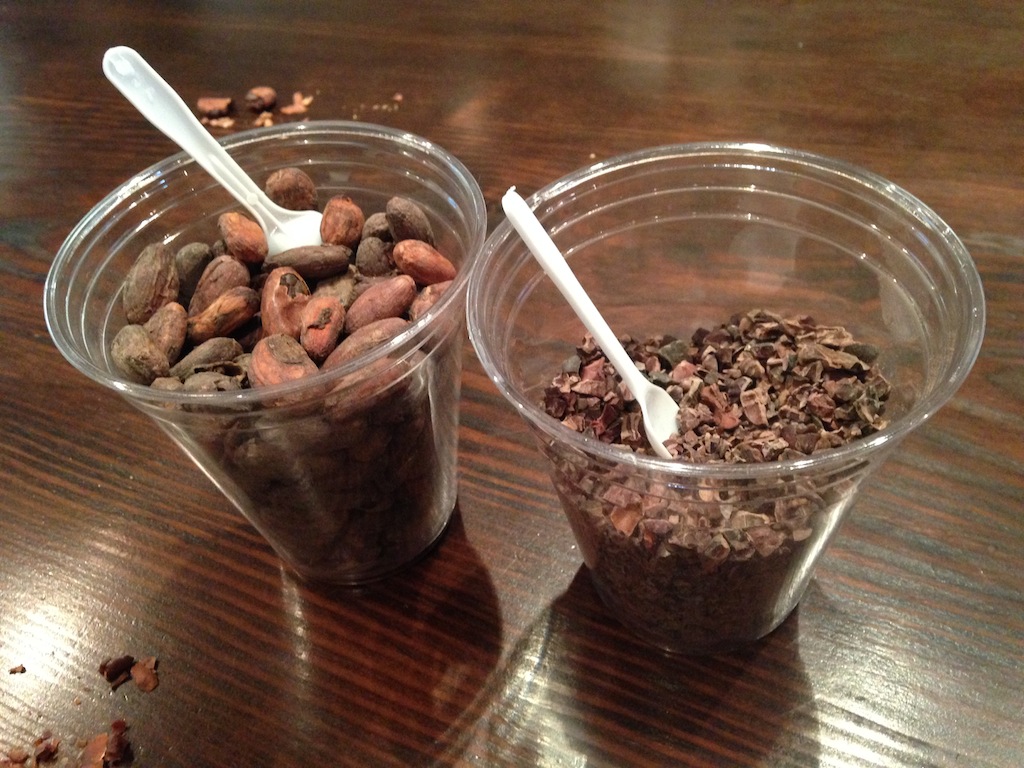 Cocoa beans, left, are roasted and shelled, and what remains are the nibs, right

A pair of longtime chocolate pros, Wade Pugh and Richard Foley, launched ChocXO after having their hands in pretty much every other aspect of the chocolate making and selling business for over thirty years. “The end result was clear,” explains Foley of their choice to move into this small-batch, high-quality operation, “we needed to make the chocolate ourselves.”

While B.C. is saturated with artisanal chocolatiers, ChocXO is among a very slender margin of those businesses in the province who make the chocolate from bean to bar. 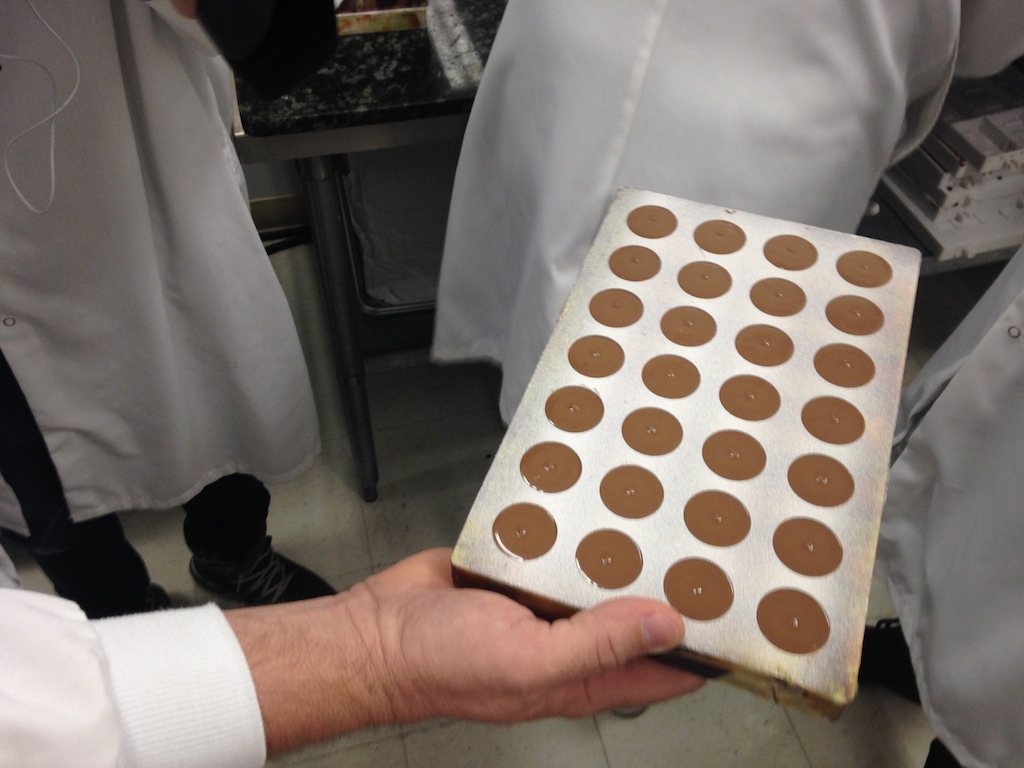 A tray of just-poured truffles

Foley, who splits his time between Vancouver and ChocXO’s larger facility in Southern California, honed his skills turning cocoa beans into chocolate bars in what he calls their “lab.” In California, he oversaw the training of numerous pastry chefs and culinary professionals learning the trade, and when that facility needed to expand, that equipment came up north to B.C., where it was put to work in Richmond.

Visitors to the ChocXO Cafe are greeted at the door with the enticing aroma of chocolate, and are beckoned to the back of the room to peek through large windows into the production area. 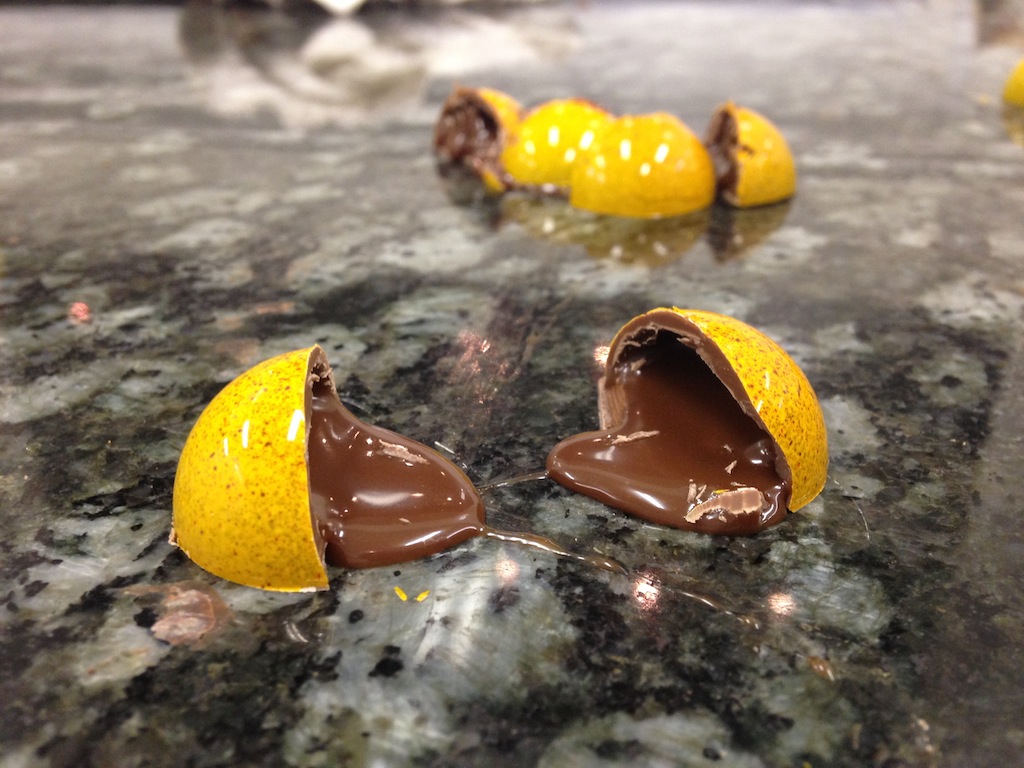 From the roaster to the grinder, then “conched” (that’s chocolate science lingo for kneading and mixing), the beans–carefully selected for their depth of flavour–transform into anything from truffles to the rich syrup that turns a latte into a mocha at their coffee bar. It just takes a little “software and magic,” jokes Foley.

ChocXO can turn out about 30 to 40 kilos a day of chocolate (versus the one ton daily that comes out of their more technologically advanced California facility), but the customer gets to focus on that bar or box of sweet chocolate jewels in their hands at the cafe. 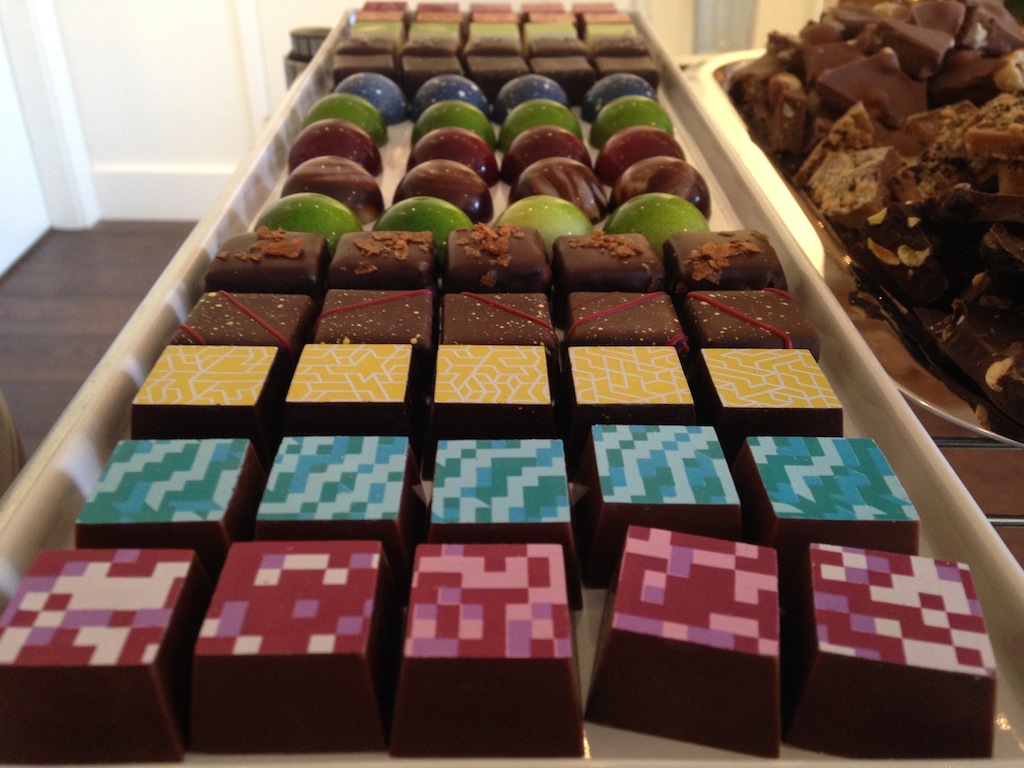 Some of the finished product

Whether you’re there to learn about how chocolate is grown and made (it’s pretty incredible) or just to warm up on a chilly B.C. day with one of their outstanding hot chocolates (in milk, dark, or white), the ChocXO Chocolate Cafe is a noteworthy addition to Vancouver’s robust chocolate scene.

ChocXO Chocolate Cafe is having their grand opening on December 6, 2014, and attendees can score free chocolate for a year if they’re brave enough to show up dressed as one of Willy Wonka’s iconic Oompa Loompas. Look for chocolate classes and other events at the Richmond facility in the new year. 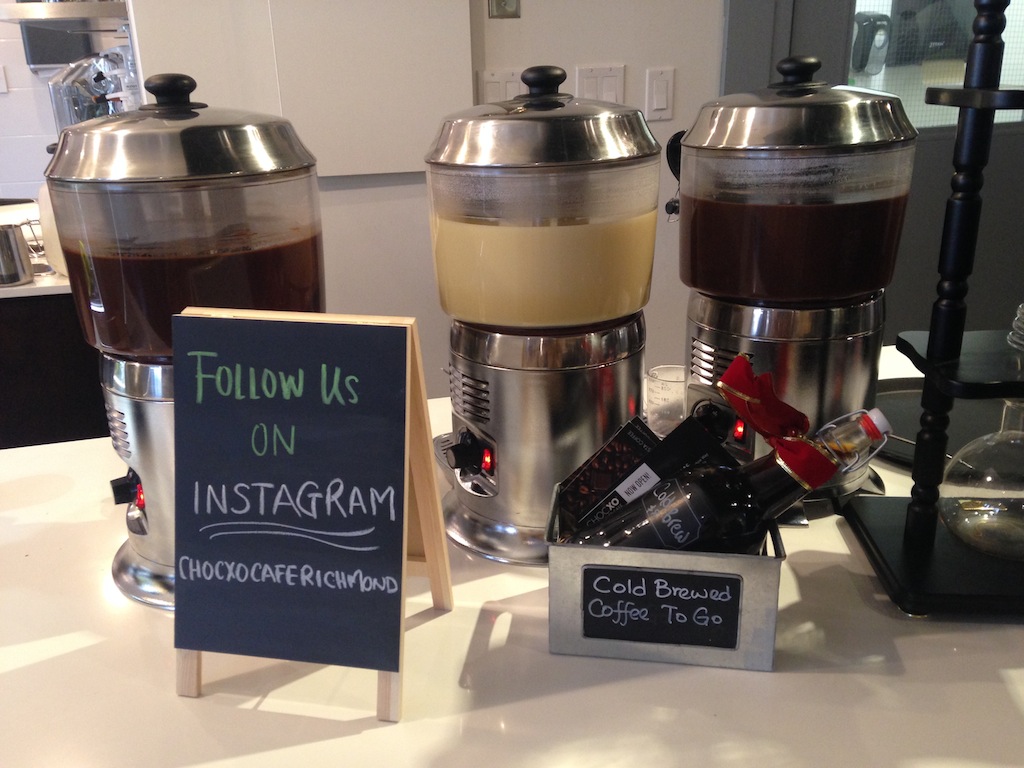 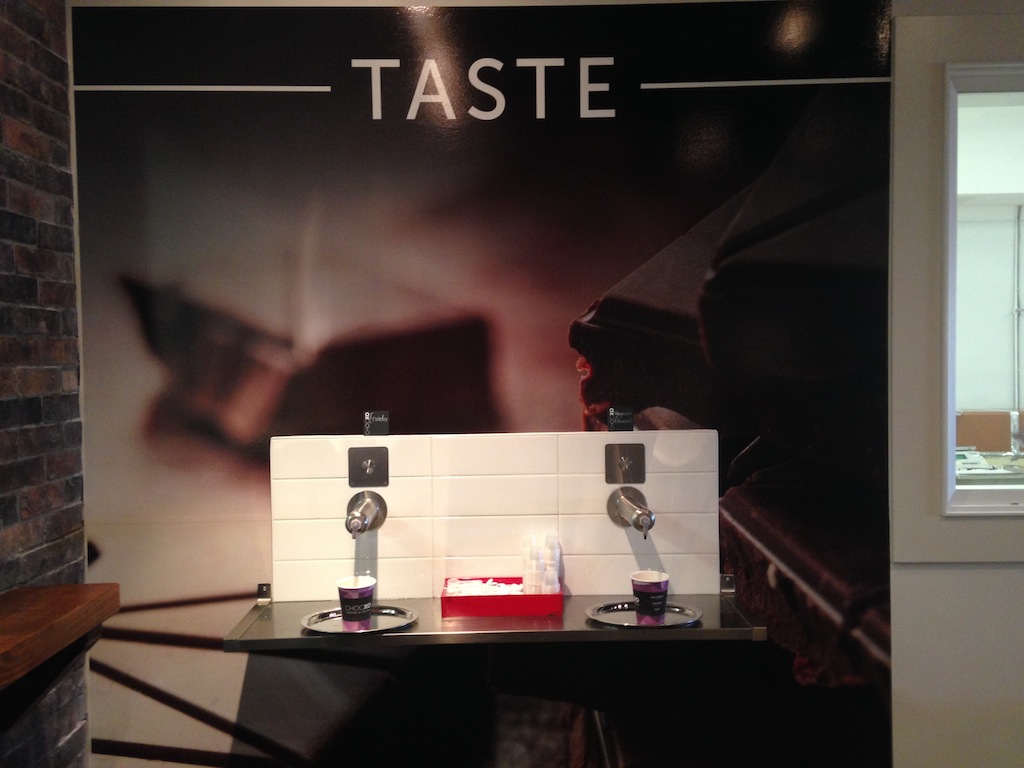 Yes, you can get tastes of the liquid chocolate 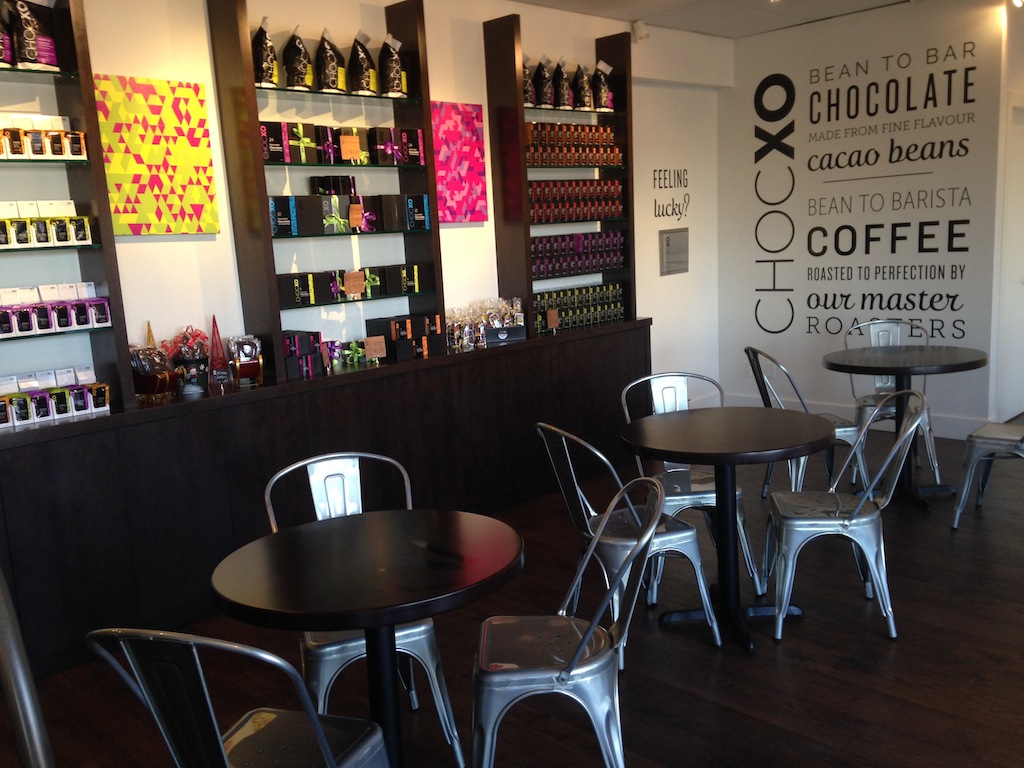 Seating inside the cafe 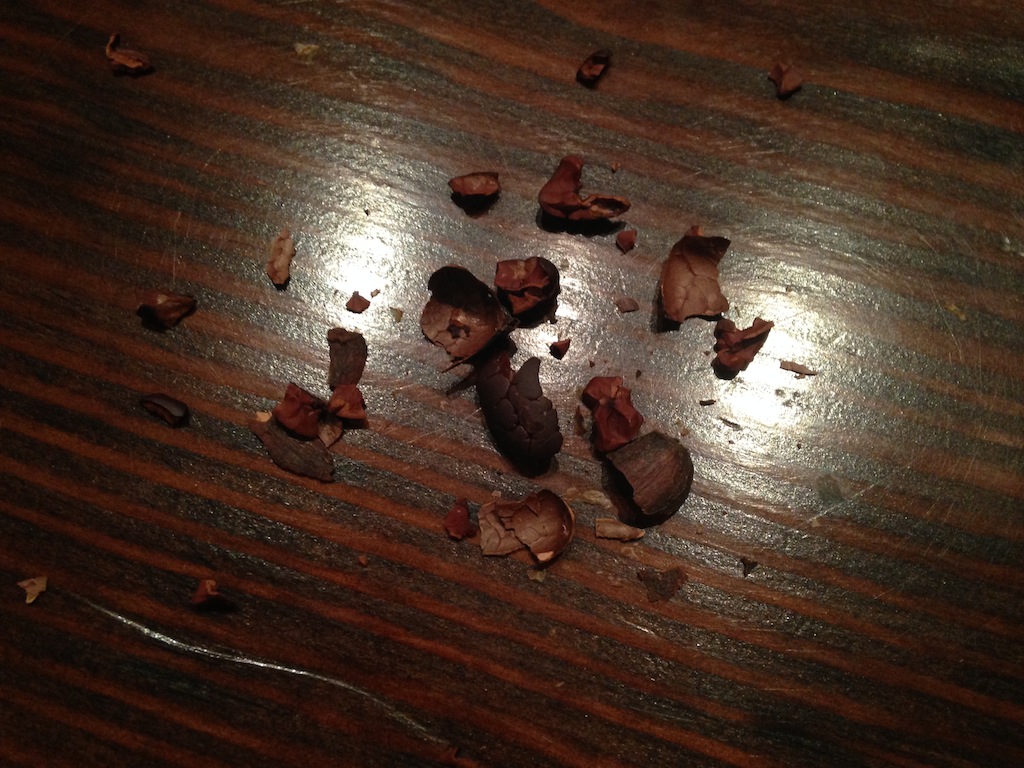 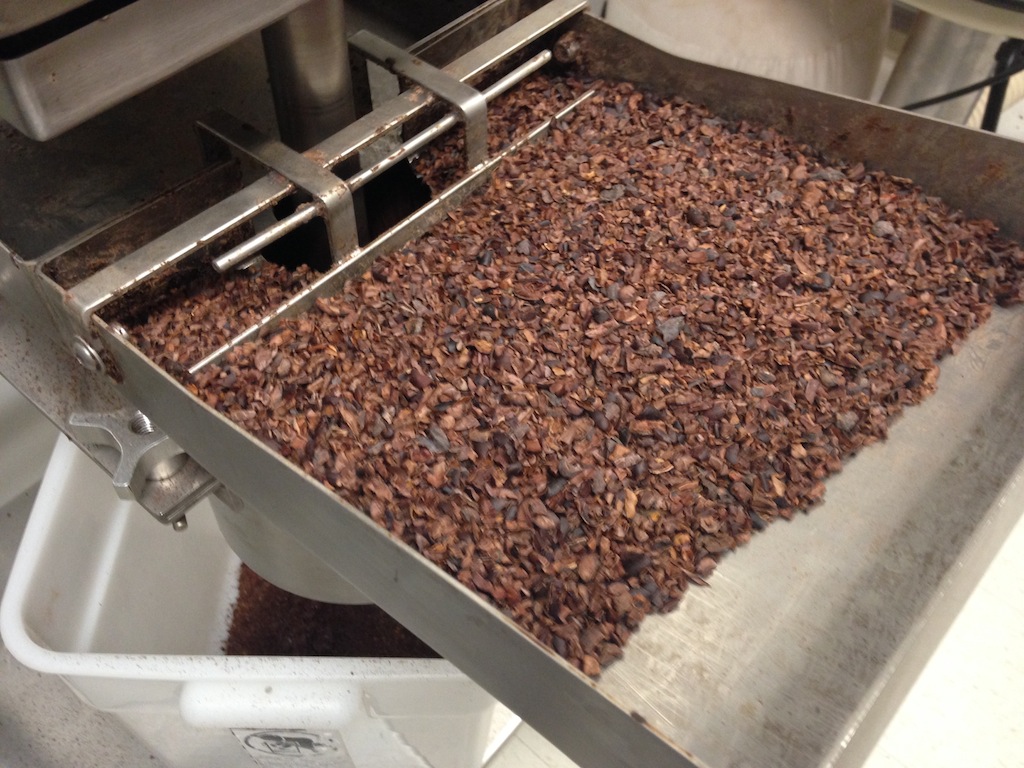 Beans in the roaster 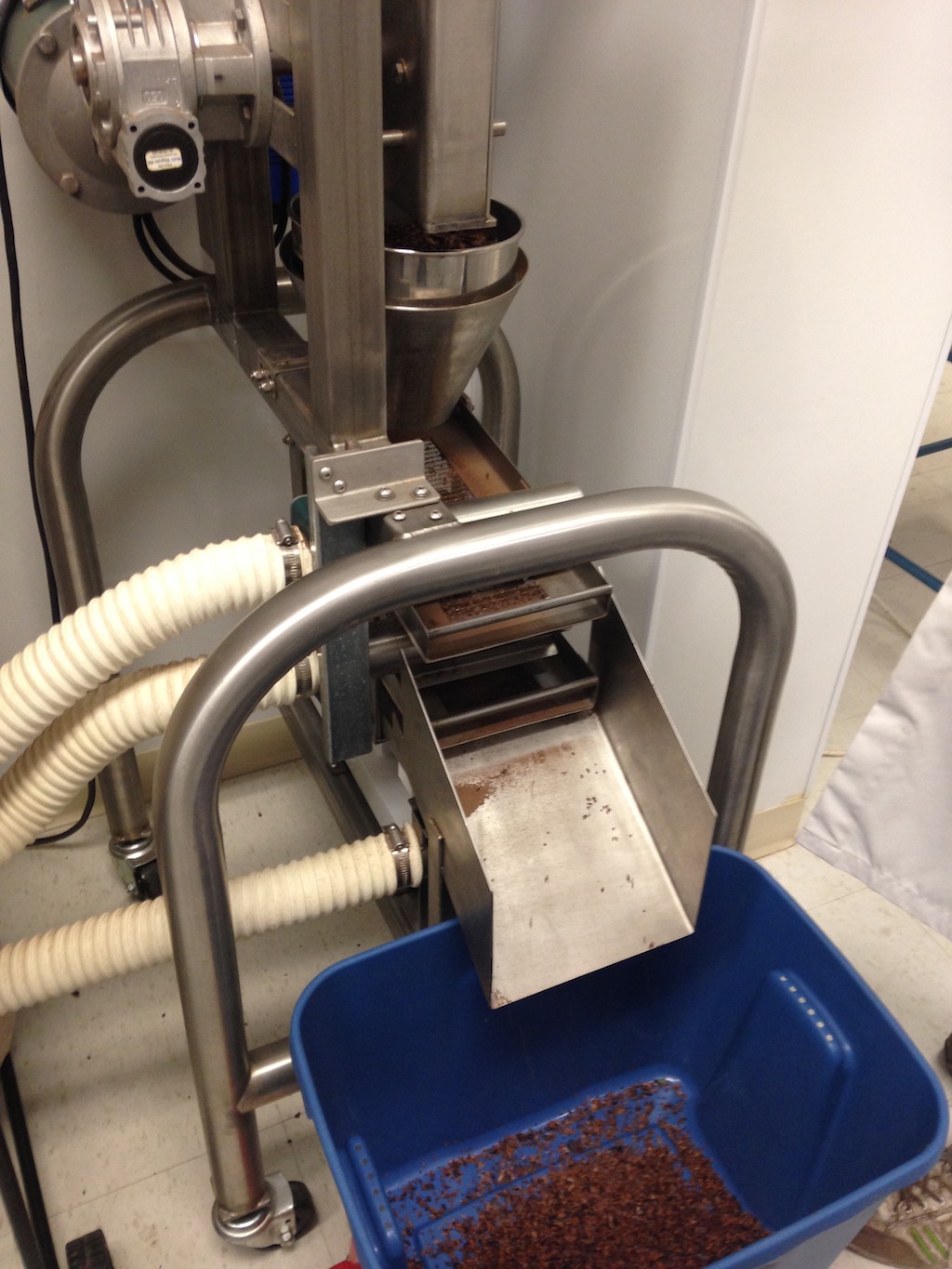 Shelling the beans to get the cocoa nibs 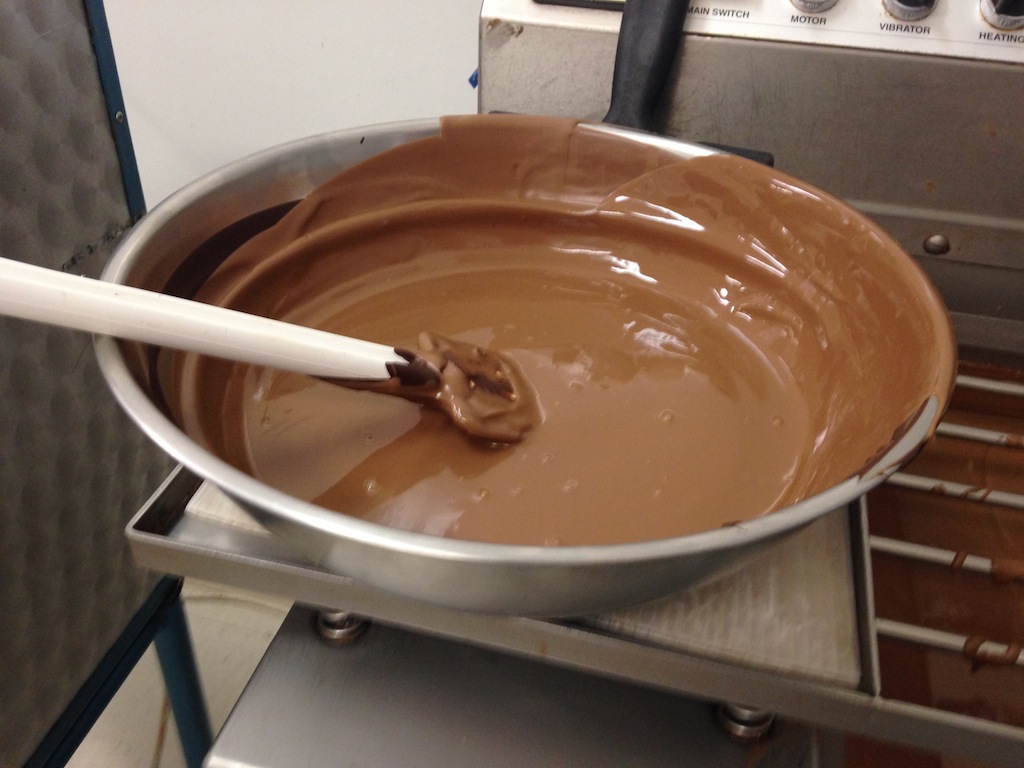 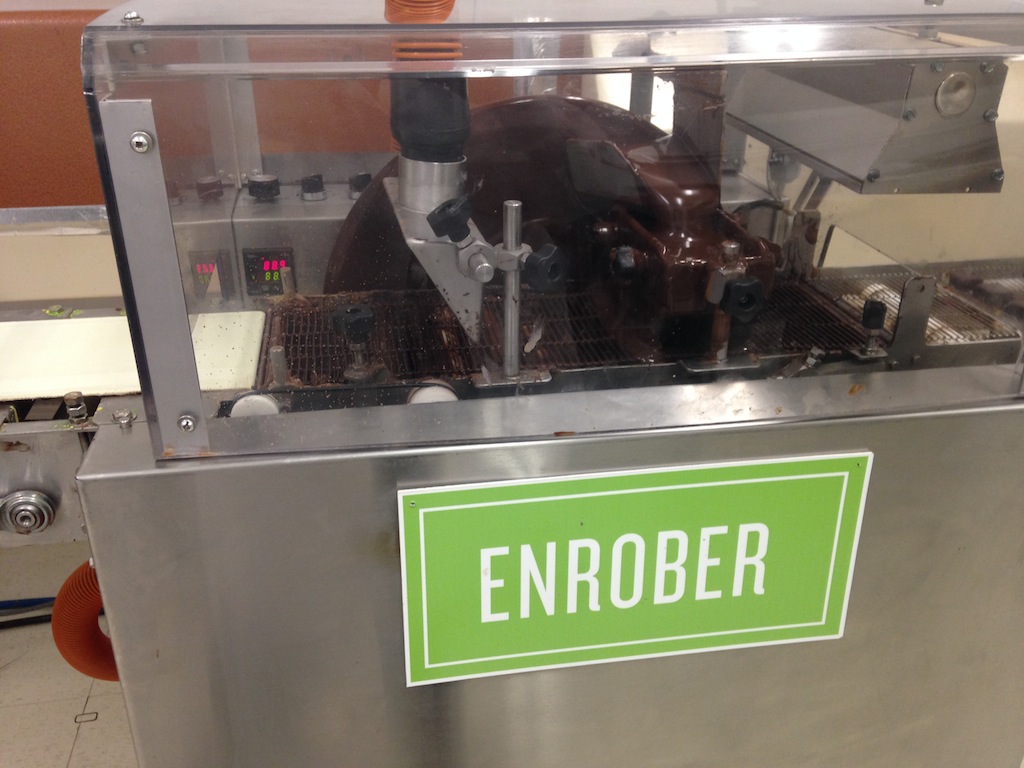 The enrober is where chocolate is draped over the base fillings 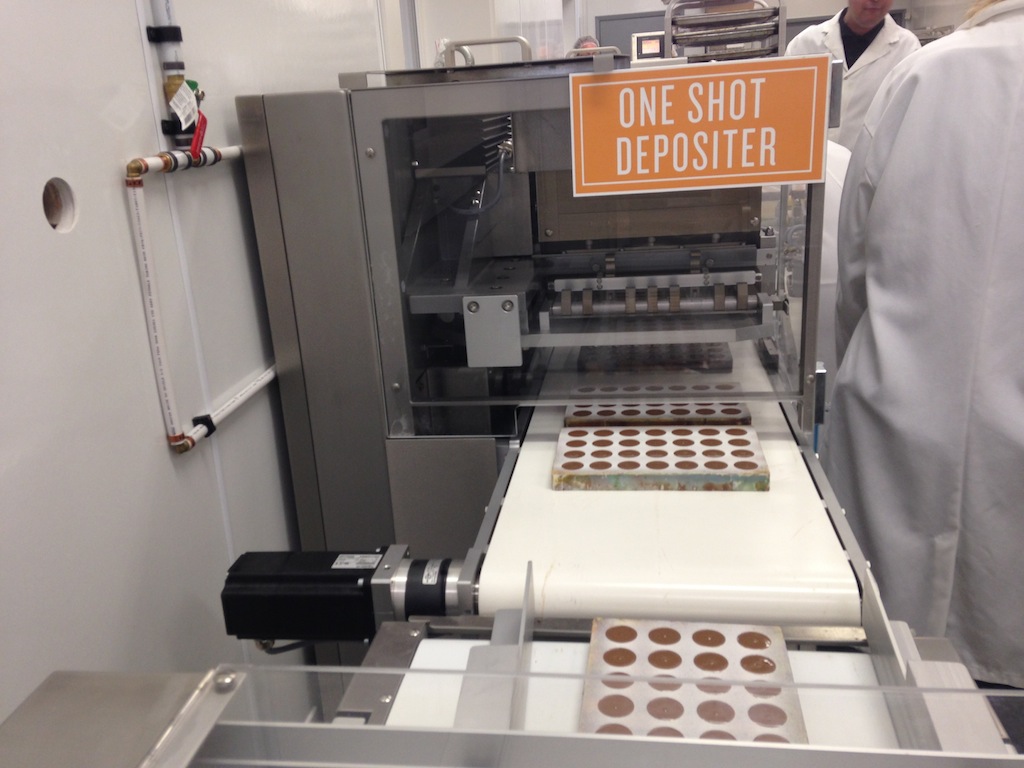 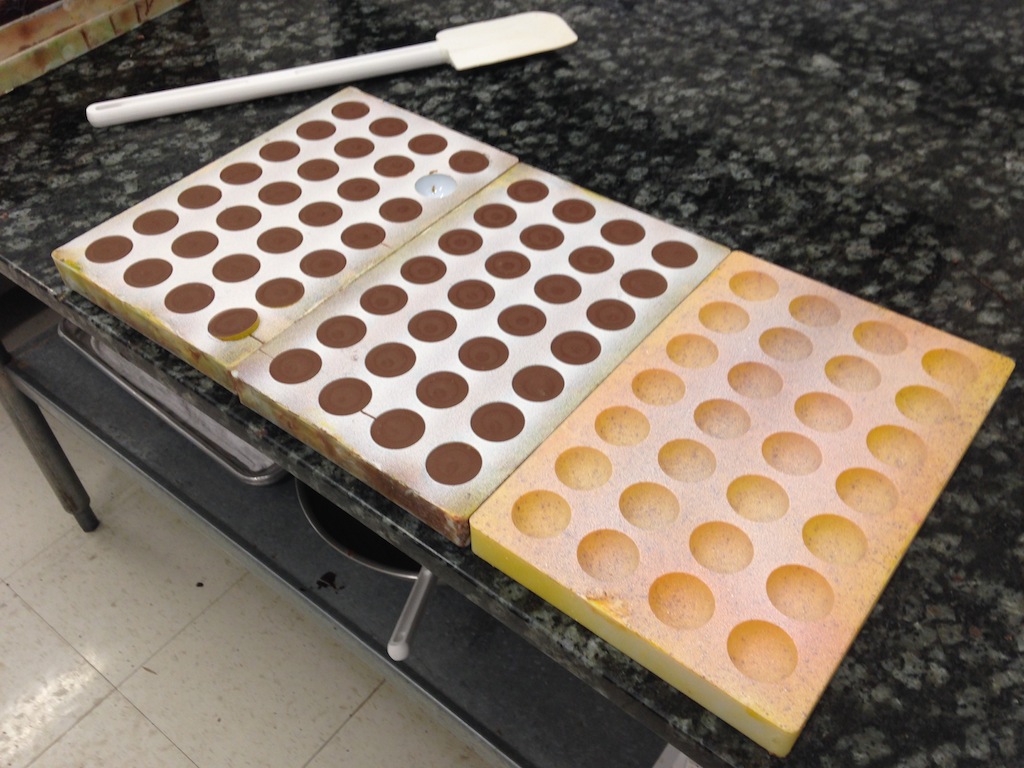 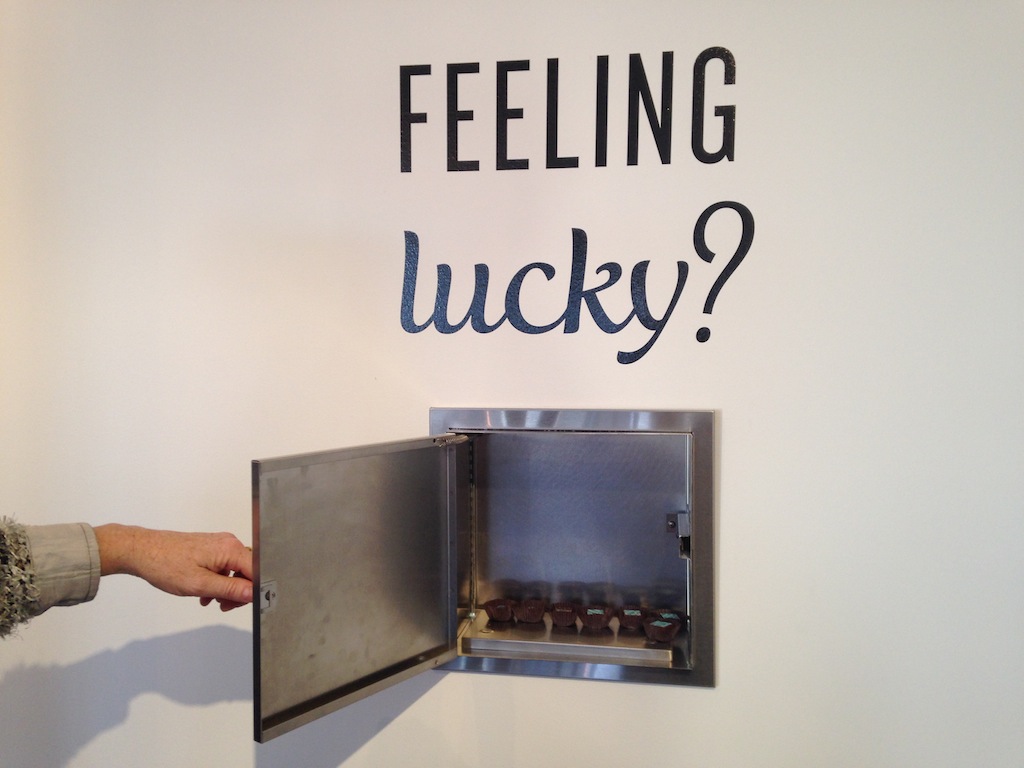 If you’re “feeling lucky” you may find samples inside the vault in the cafe.

All photos by Lindsay William-Ross/Vancity Buzz