Bray Wyatt burst onto the main roster scene in WWE in 2013 (RIP Husky Harris) and immediately made an impact. Not so much with his wrestling, but with his character. On a roster loaded with your typical average looking wrestler, Bray had a distinct look (he wore a fedora!), and spoke in a very different way from the rest of the roster. There was no way Vince McMahon was going to get Bray to tell us “suffering succotash, son!”. It made him stand out. It made you want to see what direction he would go in.

Two years later, however, and the Bray Wyatt hype feels like nothing but smoke and mirrors (inert awful Cody Rhodes entrance song here).

So, Bray Wyatt bursts onto the scene. He’s like this cult madman, with an unknown agenda. He speaks in riddles and he has two huge minions who follow his every order. In an industry that is dying for effective stables, this was welcomed with open arms. In fact, the Wyatt’s vs The Shield would end up being some of the best stuff WWE has done in many years. It made us wonder when Bray Wyatt was going to start taking over the world, when he was going to start recruiting more people, when he was going to start saying things that actually made some sort of sense.

Alas, Bray Wyatt is still the exact same person he was when he debuted, except now he no longer has minions.

1) I don’t understand his motivations. When he first arrived he talked vaguely of taking over the WWE and saving people or showing us the truth or buying us ice cream cones. It didn’t really matter at the time, because we all assumed his goals would soon become clear.

He is still talking today about the same things he did when he first arrived. Pale horses in the moonlight and other random metaphors that sound like he found a Mad Lib in the trash can the night before.

“I went to the attic of [Inspiration] and Sister Abigail told me to look into the eyes of an [Elephant] to find my answers. In that [Elephant] I saw [Humanity] for what it is…. pure [Taco salads].”

Sister Abigail still exists only to fulfill the faintest of character development for Bray.

He’s like a comedian who won’t get to his punch line. Eventually you realize there is no punch line and he’s just some guy who happened to find a microphone. 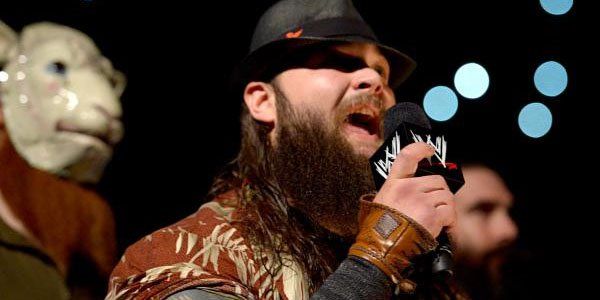 2) His story lines haven’t had any real impact.

And I know, this is wrestling. We’ve seen Mae Young give birth to a hand. Sometimes story lines can be stupid.

But this is a guy who has flirted with the top of the roster. He has been pushed hard by the WWE. In order to keep up that valuable suspension of belief, I want more than Bray Wyatt just breathing in sharply and laughing at his own ramblings. I need to see that his actions have consequences and results. It’s like watching Kane wrestle now, there’s just no point to it, we already know how it ends.

He kidnapped Daniel Bryan for an hour, before dumping him in a parking lot. Bryan would join them for a couple of weeks before turning on them.

He kidnapped Kane, only for Kane to show up a couple of months later in his current role as Corporate Kane. So basically Kane got kidnapped and ended up with way more job security. Not exactly a ringing endorsement for the “destructive” ways of Bray.

On top of that, Bray Wyatt doesn’t really have a huge win under his belt. He beat Chris Jericho, but a Chris Jericho that had lost to Fandango. You could almost see Corporate Jericho giving a thumbs up to Vince while he started writing his new book in the ring. Beating Jericho no longer carries the weight it once did.

He also beat Daniel Bryan, but this was during the time everyone was beating Daniel Bryan, as the WWE did its best to deflate the Bryan balloon of hype. I am still amazed El Torito doesn’t hold a series of victories over Bryan during this time with Michael Cole yelling about “vintage Torito!” moves.

Wyatt took out Ambrose with a TV monitor, which was a decent victory, but still on a mid card level.

Wyatt’s fued with Cena was a re-boot of Kane’s feud with Cena. How many times do we have to see people try and “change” John only for it to fail. Wyatt’s only rub in that feud was winning a steel cage match in which Rowan and Harper interfered, and a random demonic child showed up.

Wyatt’s feud with Undertaker ended with him losing to a guy that hadn’t wrestled since being put in the hospital by Brock Lesnar.

Bray Wyatt’s biggest accomplishments were his work with Rowan and Harper against the Shield. And again, while that was one of the highlights of the WWE that year, Bray on his own has no great storyline victories, which makes him look weak in comparison to his Family days. His biggest singles accomplishment is probably the fact he’s improved his dismount from his poltergeist walk. 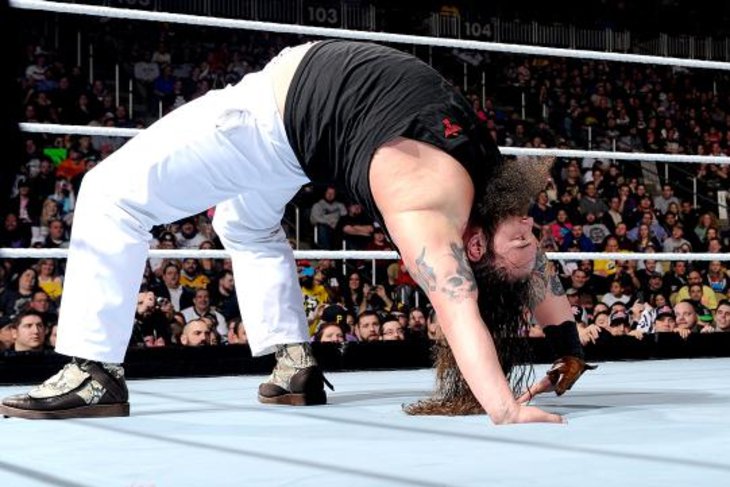 3) He keeps giving himself nicknames he hasn’t earned. This is a small gripe, but apparently Bray is now pushing himself as “The New Face of Fear”, which is laughable, because what has he done to earn that moniker? It would be like me saying “I’m Wyatt, I’m known as the ‘Lady Killer’ in Vancouver.” No I’m not, and I have no proof of it. I shouldn’t be giving myself nicknames, least of which nicknames that I have not come close to earning. Bray already had the awful “Eater of Worlds” that makes zero sense. What worlds are you eating?? What next, the “Diviner of Souls”? The “Hot Dog of Retribution?”

I know some people simply accept whatever a wrestler tells them if they’re emotionally invested in them (you just know that people are creating twitter accounts under “NewFaceofFearWyattFan123” and are proclaiming Wyatt to be their god), but wrestling is essentially simple storytelling. At least try and connect the dots once in a while WWE, so I can get on board with a character like Wyatt. Stop trying to sell me t-shirts Bray and go out there and do something, damn it. Go start a new cult and start brainwashing wrestlers!

Mick Foley claims Wyatt is a future WWE Champion, and you could see him one day holding the title. He moves well for a big man, he puts on solid matches, and he does have the ability to draw people in.

He just needs some substance now. Enough relying on him improv-ing his way through a bullshit promo. Give him motivations, give him a direction, and unleash somebody who actually impacts the roster somehow. A fedora and a lantern can only get you so far, it’s time to get him out of the chair and start walking.