On February 11, 2013, BC’s first ever family day, 18 year-old Paige Glazier’s parents received a phone call informing them of a slanderous graffiti message written about Paige in bright orange spray paint on the side of her high school located in South Surrey. “Paige Glazier is a c—”. What makes it even more mind-numbing is that these words that never ever should be uttered were coming from people she used to call friends.

Just like the large population of young kids out there in BC who have experienced bullying, both social media and the horrors of attending high school became a nightmare. Ultimately, Paige wanted to turn her negative experiences into a positive one, something she had been dealing with since the age of 12.

Sooner or later, solving the bullying problem would take more than just wearing a pink shirt once a year.

After graduating, Paige decided to take a step back and start working with elementary schools to encourage pro-social behaviour in children, ­­well before they become teenagers.

One in seven Canadian children aged 11 to 16 are victims of bullying, and are more likely to develop mental illnesses such as depression when they reach adulthood. Out of the 72% who observed bullying at school, only 40% attempted to intervene.

Simply put: someone needed to step up.

Paige Glazier did just that and created a campaign called Team Orange three years ago, inspired by the vile orange letters that were used to defame her character. The program is designed for elementary age children. The mission is to eradicate bullying and its consequences by teaching three things: Inclusion, Loyalty, and Respect.

Paige has spoken at International Women’s Day, been part of We Day Vancouver and completed the White Rock Youth Ambassador Program, designed to foster future community leaders through networking and mentorship. She has also participated in the B.C. Ambassador Program to promote Team Orange provincially.

Paige would like to take her campaign to the next step with a take-home message in the form of a children’s book. Team Orange hopes to raise $10,000 in order to fund the books. Glazier is working alongside university students Caitlin Jones and Gabriella Galvez to make the books, with Paige and Caitlin writing together, and Gabriella illustrating.

All of the money raised from the fundraising will go directly to the funding of the book illustrations, and the costs of both publishing and printing. One book will feature a Disney-like scenario of her personal story with a clear message of the big three words Team Orange preaches, and the second will as emphasize pro-social behaviours, focused around superheroes.

Here is a sneak peek: 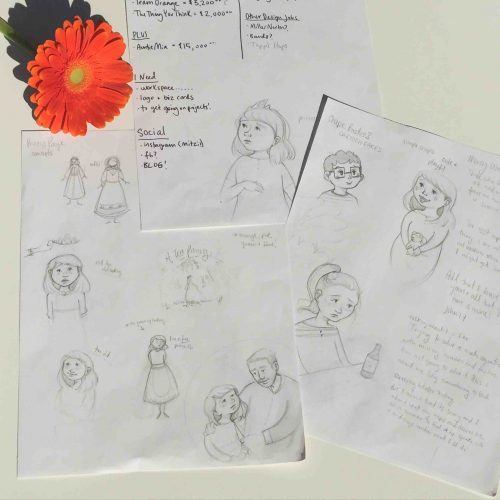