This profile has been a long time coming. I’ve been meaning to do a proper write-up ever since I saw the line at Vancouver Fashion Week back in November 2008. Four months later and I finally got the time to sit with the mastermind behind Merder Tees, Duran Bodasing in his Gastown studio.

Duran an ex-video game designer (with over 14 games under his belt) has entered the realm of fashion with a bang. Merder Tees is a partnership between Duran and two partners. However, Duran is the one running the show and is credited with designing every piece in the line.

Having talked to Duran a couple of times it was evident that this man knows how to not only come up with cool designs and market, but he also knows how to run a business. That is the key to a successful business. A self-professed perfectionist (he scrapped the initial line of tees after all was said and done), Duran is always looking to tweak the design until it is absolutely perfect. There are also some neat touches which includes certain Tees being bagged in FBI bags and come complete with sidewalk chalk and how-to guide! Very cool.

Moving on, enough about the man behind the line lets talk about the clothing line. The concept of Merder Tees came about by complete fluke. According to Duran, he was just drawing, looking for a common theme that could be turned into a series to put on tees and prints. At that point he thought about a series on dead presidents, in researching the subject matter further he realized that the most of the interesting presidents that he wanted to draw had been murdered. At that point Merder Tees was born.

Duran began to research the topic further and became consumed by the subject matter and the conspiracy theories that come with high profile murders (see JFK, Princess Di, 9-11, Marvin Gaye, etc…). The end product may be perceived as offensive by some and heralded as a great piece of artwork on a T-shirt by others, in the end it gets people talking. “That’s what I want,” says Duran. The buzz was evident after Vancouver fashion week and it was well deserved, loved by most and hated by some. In an interesting tidbit Duran was even called “the devil” by a local online magazine (that shal 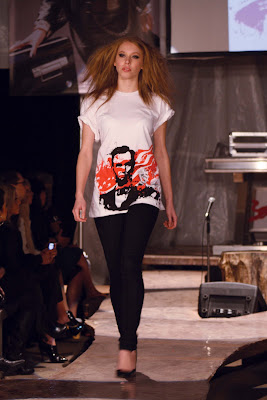 l remain nameless) that scrapped an article and photo shoot. Now that is taking it too far. However, we at VcB have no problem with the line.

“People will talk, but You won’t listen…”

I asked Duran what was meant by that quote, which sits atop the Merder Tees website. He replied, “it speaks to the controversy of the product line.” and by wearing a Merder Tee you are choosing to block it (controversy) out, in other words a big middle finger to the haters.

Not to be forgotten is the charity component. 5% of each sale goes to the celebrity chosen charity. A way to detract the haters, perhaps. Anyway you slice it, giving to charity is never a bad idea in my books.

The line itself doesn’t focus on just dead presidents (such as the Lincoln and Kennedy Tee) instead Duran came up with 35 or so prints in three categories: “cold-blooded killers”, “forensic” and “homicide”. There are also 14 celebrity prints including a Phil Hartman shirt! That’s right a fucking Phil Hartman shirt! That in itself is dope, Hartman was the man. Then there is the most controversial tee, the 9-11 design.

Duran is currently heading overseas to London to launch the line at Selfridges, dubbed the “it” shop in the UK. The line will be in 30 -50 stores across Great Britain. This for Duran it will be a homecoming as he grew up in London and absolutely loves the city. London is also known for its harsh criticism of fashion. As Duran states, “if it passes there, it’s cool.” Further, he feels that in order for the brand to get approval from the Vancouver crowd it needs approval from more fashion forward cities such as London and New York. I agree as Vancouverites for the most part know very little about fashion trends, yoga pants aside of course.

Love it or hate it, either way it gets people to react and perhaps even think. “Now a T-shirt that does that is powerful,” exclaims Bodasing. Or perhaps you’ll wear it because it’s a unique and cool design. Whatever the reason I’ll be buying a few just because the great designs.

Locally Merder Tees will be available at Boys’ Co this summer and the tees will be around the $100 range.