Since the WWE hates Vancouver and seems intent upon giving us only house shows for the next 10 years, any time WWE rolls into Seattle or Portland to do a Raw, I do my best to make it there.

This time Raw was in Everett, which is like Seattle’s smaller, less fun brother, but still a town I have fond memories of (ball hockey tournaments, baby!). My goal for this trip? Buy a Brock Lesnar “Suplex City: Everett, WA” shirt, mostly because I find it amusing that it says Everett on it. It would be like having a “Suplex City: Port Coquitlam” shirt, amusing in the small town nature of the shirt.

With that being said, here is my diary of my time in Everett.

– First things first, whenever I go to a wrestling event with my buddy Bowman, we wear matching Florida Marlins Jose Reyes jerseys. 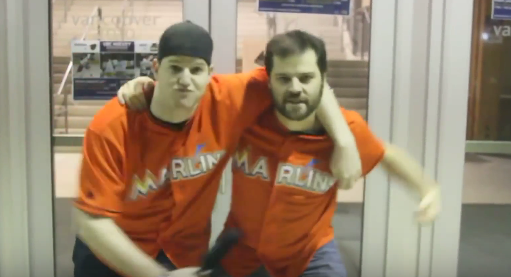 It’s just something that sort of happened, but it is our official sporting event garb. This led to people whispering as they saw us “Maybe they know Jose Reyes?” or asking us at the door “So you boys from Florida?”

– Everett is a weird mix of stores not many people are going to go to much (DVD stores and vacuum stores) and Mexican food places that you can’t tell from first glance if they’re closed down or not.

– The Ynot Sports Bar and Grill was where we dined for lunch, and this place was packed to the rim with Seahawks memorabilia. Like, if Marshawn Lynch sneezed on something, odds are it was proudly displayed on the walls here.

The Mariners? Not so much love. While all of the menu was named after Seattle sporting teams (LYNCH BURGER, 18 PATTIES AND IT GETS SHOVED DOWN YOUR THROAT WHETHER YOU WANT IT OR NOT, GO HAWKS), the lone Mariners menu item was presented with little fan fare.

Best part? Somebody ordered one while I was there.

– Once we finished lunch, we headed to the arena and got in line to head in. One guy remarked while we were standing in line that they didn’t have enough XXXL t-shirts for sale. “Don’t they know their demographic??” Well played sir, well played.

– One man practiced his comedy routine outside the arena, asking what WWE and the Seahawks have in common? They both only have one ring. The “Zing” ratings were off the chart in Everett. 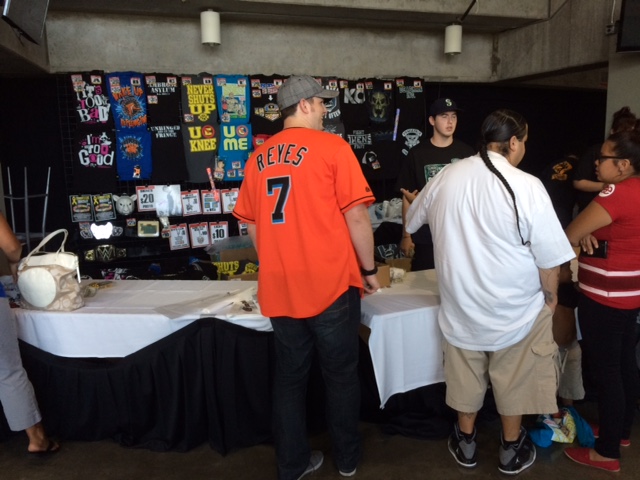 The Reyes Boys getting no respect in the merch line up, getting served dead last

– Yet another fellow (apparently half the people in Everett are travelling performers. Vacuum stores can only bring in so much money.) was performing wrestling moves and ninja moves on a tree outside the arena. He would clothesline the tree, deliver a couple of kicks, then hold up a sign for his YouTube channel. I don’t know what would compel you to want to check out a dudes YouTube channel after watching him kick a tree, but he had a title belt around his waist, so who am I to question him.

– Fun fact, 50% of any wrestling crowd owns their own belt. Shout out to the kid who went the extra mile and had FOUR title belts. Kids a god damn champion. Part of me hoped he got one of those titles from the tree kicker.

–  If you’re ever planning on going to a WWE show, don’t bother buying floor seats unless they are in the first five rows. Otherwise all you see are the backs of heads of people either standing up the minute something of note happens (“Oh shit, a DDT, I gotta stand up to see this”), or children standing on seats to get a better view, thus turning that delightful small child into a 7 foot, view obstructing monster.

Or you get the worst scum of society, the Camera Crew. Who are the Camera Crew? Those are the people who are at a live event who feel the need to stand up for 80% of the show, holding up their giant iPad, as they record the proceedings.

Why? Why are you doing this? What are the odds you’re going to want to sit through 120 minutes of poorly recorded footage from your seats? “Oh honey, look, remember when I recorded Lilian Garcia getting out of the ring? Or when I recorded the announce table because Randy Orton stumbled into it? Oh how we laughed and laughed.” 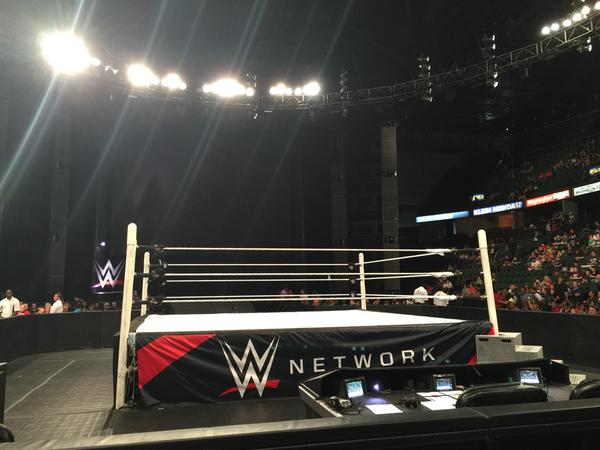 @ryan_bains had a much better sight line then my seats. He could probably hear the “MAGGLE”‘s from JBL all night long.

– The key to any mid card wrestler is to wrestle on the first match of the show before Raw starts. This is when fans are at their most happiest and are just happy to be there and are excited to see things live. “Jack Swagger?? I know him! I see him on TV! YAY! WE THE PEOPLE!” R-Truth is never more over than when he’s opening a show before Raw. “What’s Up!” was very popular.

– Randy Orton was unnaturally loved by the Everett crowd. I know everyone has their own tastes (Randy Orton, master of chin locks just doesn’t generate a ton of excitement in me), but there isn’t even a good story line for Randy right now. I can’t imagine a ton of people are stoked to see Orton vs Sheamus, yet Orton got some of the biggest pops of the night.

– If you really want to increase your fun, have a HUGE Randy Orton fan stand behind you when you go to a live event. For double the fun, make sure Randy has two matches on the night so you can hear every single high pitched screams over again. “GET HIM RANDDDDDDDDDDDDDDYYYYY.” It was unreal. This girl was emotionally invested in Randy.

Don’t get me wrong, that kind of passion is awesome, but it was weird seeing somebody lose their mind over a scoop slam. “YEAH RANDY, GET HIM, SLAM HIM REAL GOOD! CRANK THAT CHIN LOCK!!!”

Also weird, Randy’s pose on the turnbuckle garnered a huge reaction as well. One guy was waiting in the crowd, going “wait for it….wait for it…” then when it happened he lost his mind.

Randy Orton. Everett loves you. What can I say.

– One guy in the crowds sole purpose was to see signature moves. Every time somebody would get hit with a signature move, he would cackle and shout “GOTCHA!” as if he couldn’t believe the wrestler got caught with it. I initially hated him for it, but I learned to love him for it by the end of the show. I began to anticipate and embrace every “GOTCHA!” moment.

– I finally found a Tamina fan, as there was one gentleman in my section who was in love with her. “That is MY kind of woman!” 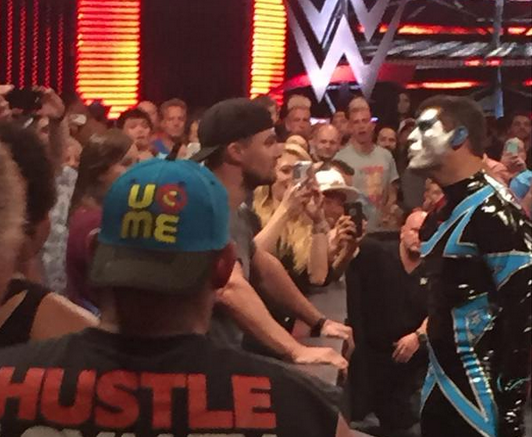 – Stephen Amell, the Green Arrow, was at the show, and was oddly booed when he was introduced or talked during any segments early in the show. Sorry Stephen, Everett hates the Green Arrow. They are a Flash kind of city.

– Daniel Bryan was the most over guy on the night. It’s almost as if being in your home state makes you popular or something. I don’t know, I’m no doctor.

– The elderly couple beside me did not care for my support of the New Day, when I stood up to cheer loudly for their entrance. I did not overly cheer their scoop slams, however. 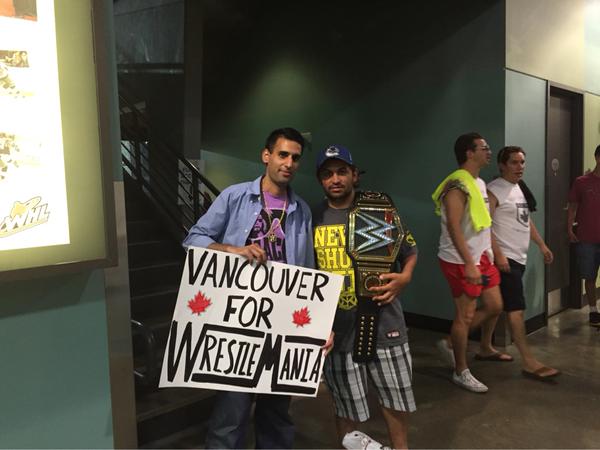 Two signs appear at every Raw that happens on the West coast, this one and the “Scott Road” sign. Both were present in Everett. (pic via @glovesaveluongo )

– The Luke Harper match was amusing mostly because he kept flexing his muscles the entire match. “Look at these gains, bro.”

– The entrance for the Wyatt family was awesome, however. The lights go off and everybody puts on their cell phone lights, it’s very surreal to experience in person. If only Bray Wyatt had a decent story line.

– A shout out to the one guy who shirked cell phone lights and kept it old school by using his lighter to sway back and forth.

– The elderly couple beside me may not have been a big fan of the New Day, but The Big Show? That guy was their jam. I am reasonably certain they only came to see the Big Show.

– Seahawks fans love their team, but my own personal hell is being surrounded by people randomly breaking out into chants of “SEA…. HAWKS” throughout the night.

– If you’re wondering what happens to the flag Rusev hangs from the ceiling after his match is over, it just falls to the ground like a used rag once his segment is done.

– While Everett may not have been a huge fan of the Green Arrow to start the show, they loved it when he tackled Stardust. OK, maybe the crowd didn’t love him, but they’d certainly invite him to a Mexican cantina that may or may not have been open after the show for a beer or two.

– Shout out to the local Vancouver indie wrestling organization ECCW representation at the show!

– The show ended with more Orton (the crowd was a bit tired by this point, so scoop slams were no longer wildly celebrated) but the RKO still brought the people to their feet. The teased cash in was pretty awesome, and had the crowd amped, but Sheamus holding onto the briefcase for an uncomfortably long period of time, not allowing the ref to start the match, was odd.

At least stumble or something, or get sweat in your eye. Why would Sheamus not let the ref have the case? We all know he’s buying time for Orton to get in there, but come on, ad lib it a bit if Orton is delayed on his cue. Drop the briefcase and stumble around trying to pick it up.

And that was it. No John Cena meant no dark match or speech about how we the fans make the WWE what it is today, alas. So many colored t-shirts sent home slightly unhappy. Still, it was a great time and despite the poor sight lines, the atmosphere of a WWE event is always a blast.

And yes, I got my Suplex City Everett shirt.