In a game that featured nine turnovers in total between both teams, Toronto failed to complete the comeback down 27-15 with just over 10 minutes left in the 4th quarter.

Ryan Phillips’ CFL-leading sixth interception of the season clinched a wild evening of football at the Rogers Centre in Toronto last night, with the B.C. Lions hanging on to prevail 27-25 over the Toronto Argonauts.

First-year Lion Lavelle Hawkins starred for B.C., hauling in six receptions for 136 yards, and a touchdown on the first score of the game. Emmanuel Arcenaux contributed with five receptions for 71 yards, including this stiff-arm:

Although quarterback Jonathon Jennings had a mediocre night passing with under 300 yards throwing and two interceptions, he made an appreciable contribution on the ground picking up 35 yards with his legs. This was especially valuable given that leading CFL rusher Andrew Harris only tallied a 10 yards on 11 carries.

For the Argos, Ricky Ray made his first start in 362 days after undergoing surgery to repair a torn labrum in his throwing shoulder and a small tear in his rotator cuff. Ray’s recovery has gone slower than expected, and yesterday looked flat-out rusty.

Friday’s win was huge when it comes to clinching a playoff spot. 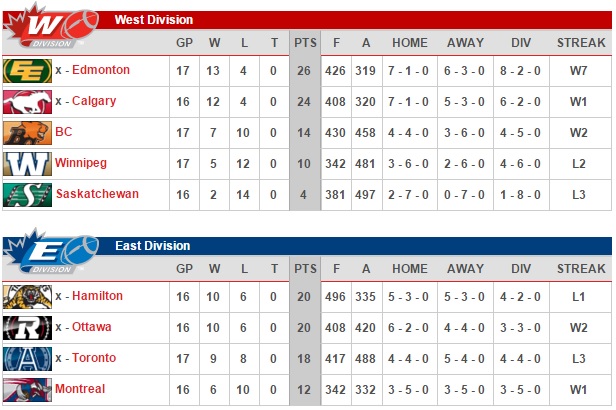 The Lions are holding down the 3rd and final playoff spot in the West, and only Montreal (via the crossover) can catch them. B.C. can clinch a playoff berth Sunday if the Alouettes lose to Edmonton.

Regardless of the result, the Lions will need to play even better if they hope to have any measure of success in the postseason. Friday’s win was a big part of helping them get there, however.