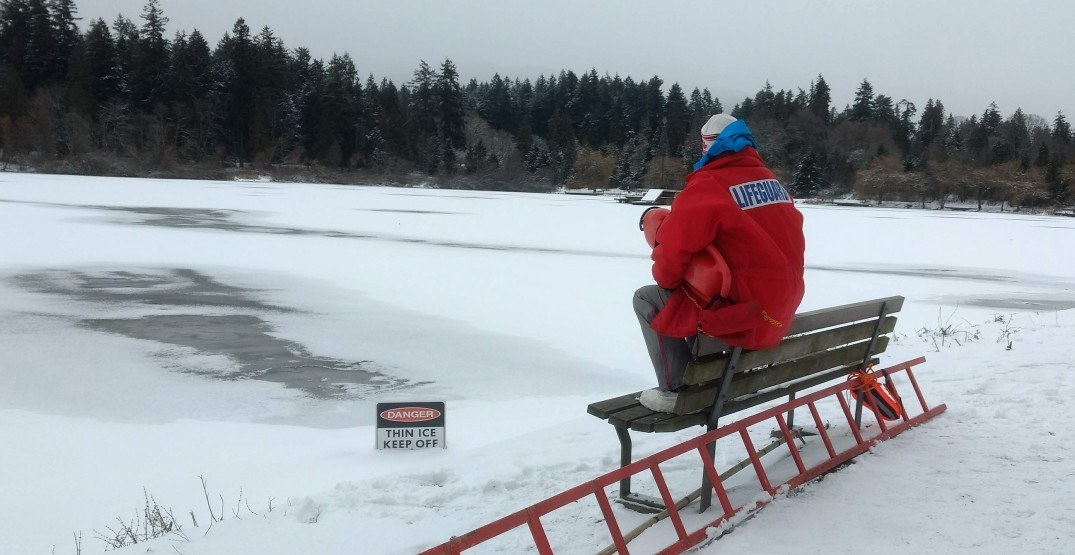 Lifeguard on duty/ Vancouver Park Board

Even though it’s not beach weather, lifeguards are still on duty in Vancouver to remind residents about ice safety at the city’s ponds and lakes.

On Twitter, the Vancouver Park Board said that the lifeguards are on the job this week to reinforce safety rules.

Please keep off the ice! Despite all the cold weather, it remains thin on lakes and ponds across #Vancouver. Our lifeguards are out this week making people aware that the ice isn’t safe. (📷 Miss 604) pic.twitter.com/ibSEMu6icI

Please keep off the ice! It’s wintry out there, but ice is still thin on lakes and ponds across #Vancouver. pic.twitter.com/O3yE1RhecF

Trout Lake, Lost Lagoon, and Vanier Park are just a few of the locations in the city where warnings have been posted.

Other municipalities have also sent warnings to outdoor enthusiasts about keeping off the ice.

Hockey players and skaters have been heading to Rice Lake in North Vancouver. But Cpl. Richard De Jong with North Vancouver RCMP says “extreme caution should be exercised when approaching frozen lakes and rivers.”

An officer in Abbotsford took to social media to express his frustration with people ignoring the several warning signs posted at Mill Lake Park.

I wanted to remind everyone that the DANGER signs aren’t a suggestion to stay off the NOT so frozen lake. I just attended to find people jumping on the very thin ice in the middle of the lake. The first responders that would have to save you would be putting their lives at risk pic.twitter.com/n1qpDoEY1H

And in Burnaby, city officials took the message one step further, pleading with the public to keep off frozen bodies of water.

“Due to unsafe conditions, all lakes and ponds in Burnaby are not open for outdoor skating. Please stay off the ice,” it warns on its website.

Looks like your best option for a winter skate is at Robson Square or a local rink in your community.