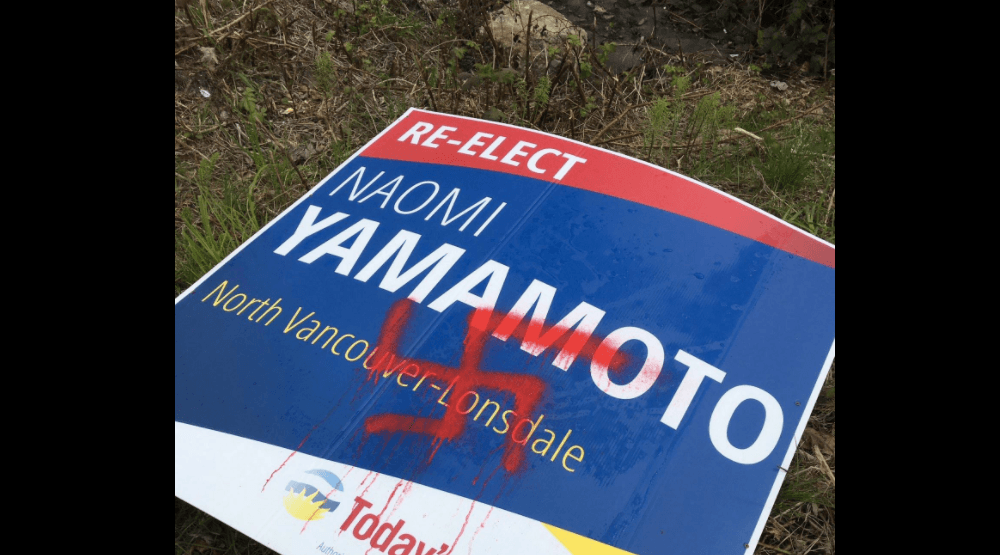 A BC Liberal MLA’s campaign sign was found defaced with a red swastika Sunday afternoon.

In a post on social media Sunday night, North Vancouver-Lonsdale candidate Naomi Yamamoto took a picture of the sign with the caption “This is not my BC.”

First elected in 2009, and then again in 2013, Yamamoto currently serves as Minister of State for Emergency Preparedness with the BC Liberals.

In a statement, Yamamoto said  she “deeply” appreciates the outpouring of support “from across party lines in response to what took place.”

She added that that the incident will not distract her or her team “from communicating positively with people of North Vancouver.”

Her reaction brought support from her fellow Liberal MLAs – as well as those from other political parties as well – such as Green Party candidate Joshua Johnson.

Regardless of political views, this extremely offensive display is completely unacceptable. Greens stand against it too. #BCelxn2017 https://t.co/vSD0RGhOL8

A spokesperson for Yamamoto’s campaign told Daily Hive that this “has not been experienced in the campaign before,” specifying that while it’s not the first time the MLA’s signs have been vandalized, it’s the first time they’ve been defaced.