Vancouver Island Liberal candidate Maria Manna has announced her resignation on her political Facebook page after a post on her personal page surfaced in which she called the events on September 11, 2001 a “lie.”

In her resignation post, the candidate for the Cowichan-Malahat-Langford riding said she “fully support[s] Justin Trudeau, the Liberal team, and the real change they are bringing to Canadians.”

“This election is far too important to have my past opinions and comments detract from that goal. I sincerely apologize to those I have offended.” 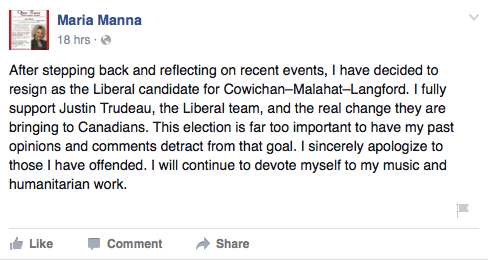 Manna’s post on her personal Facebook page dated September 11, 2013, said “today we will talk about who did it and why. Today most people will continue to believe the lie, and again, THEY continue to win.”

She claimed she knew the “truth” and that love is the answer.

Manna made another Facebook post thanking everyone for their support and the knowledge she has gained over the last eight months. She appears to be focusing on her singing career  now that she has resigned, since she included a link to a performance of “It’s Amore” that she did in 2014. 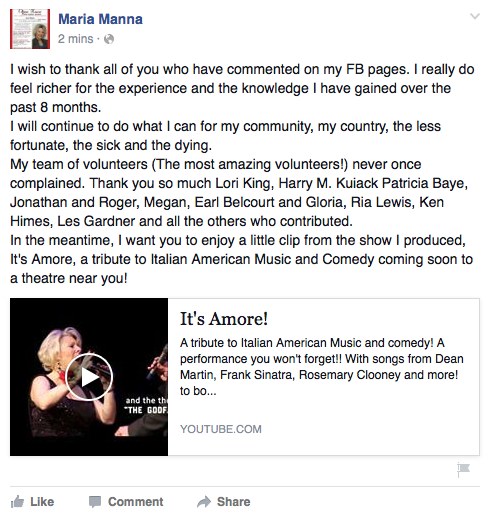 Luke Krayenhoff has taken over as the new candidate for the Cowichan-Malahat-Langford riding.

Excited to become the candidate for Cowichan Malahat Langford. 21 days to a Liberal majority!

Vancity Buzz has reached out to Manna for a comment. In the meantime, watch her clip of “It’s Amore” below: