Well, the Flames did the Canucks season in (they have an 18-year-old on the team apparently), so we might as well use this time to take a look back on the season that was. Let’s try and figure out what we learned from it, shall we? We all ready? Real good? Real good.

Full disclosure, I wanted to title this post “Canucks autopsy” but I knew Rob the Editor Guy wouldn’t have let me.

Listening to the management team of an NHL hockey club is an exercise in manager speak 90% of the time. At best you can sift through their rubbish and try and piece together some inkling of what their plans are and try and discuss it with your friends the next day.

“I’m pretty sure when he said ‘We’re happy with the direction he’s taken’ it means they want to build their defence around him.”

“I think it means they want to trade him. If they were really happy, they would have said ‘happy with his play’ not ‘direction’. I think they’re just trying to build up his trade value. Also, he wore a purple tie. You don’t wear a purple tie when you’re happy with a player.”

Obviously it doesn’t behoove an NHL club to explain every single thing they do (nobody wants to be accountable for failure, this is management 101), but it’s at least nice when they change up the buzz words. Sadly, it looks like a “real good” future is in store for us.

Questions for the coach or Benning? You will get a real good answer. Oh, we all joked about it during the season, but it was at the end of season press conference where I fully realized how committed they were to a “real good” way of life.

Any question about a prospect or player was met with a wall of “real good”. Star player, fourth liner, guy who retired 15 years ago, all of them are “real good” according to the team.

Now instead of discussing which words were used when trying to figure out what the team meant, people will now be breaking down the “real good” usage. 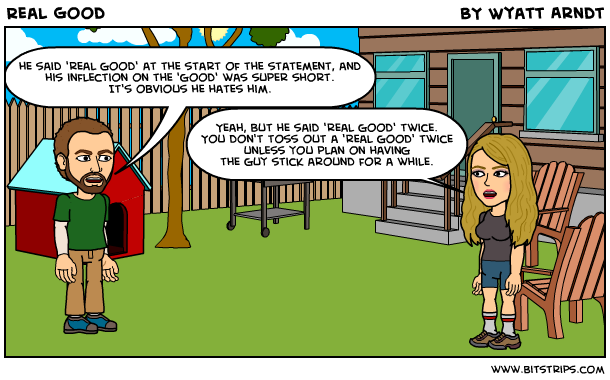 Sbisa could have 10 giveaways in a game and be responsible for two own goals, but we will probably hear about how he was “real good” in the scrums that night.

Speaking of scrums, one of the best end of season quotes we heard at the end of season press conference was the team discussing Luca Sbisa (courtesy of Cam Tucker from Metro News).

“Over the course of the year … where in scrums and stuff, there’d be one guy and he have to figure it out. But about halfway through the year, we stuck together as a team and that was everybody in the scrums sticking up for one another. And I think a big part of that goes to Derek and Luca for instilling that mindset amongst our group.”

Again, you have to take things with a grain of salt. It’s not reasonable to expect Benning to come out and admit he thinks Sbisa is trash.

“Well guys, you know what? I screwed up. I thought he was real good, but it turns out he’s not. Bad news is, we’re stuck with him for a few more years. Good news is we’re offering 20% off of his jersey right now at the team store!!!!”

You can kind of see the logic in the Sbisa contract. The team had to qualify him at $3 million anyways, so why not roll the dice on a slightly higher multi-year deal and hope he pans out and all of a sudden you have a great deal on your hands.

The problem is that Sbisa doesn’t appear to be trending in that direction. Comparables aren’t an exact science, but it still doesn’t paint a pretty picture that in order for Sbisa to turn into a top four d-man, he would have to make some rather large leaps that many d-men in his position don’t usually make. All the while having that $3.6 million in cap space being eaten up by him.

Don’t get me wrong, from an entertainment point, it’s fun to watch someone like Dorsett get in those scrums and lose his mind for no reason (Sbisa must be a stealthier scrum guy because I don’t remember him doing much in the scrums). Sometimes you want a guy who will glove hump a guy’s face and let him taste his hockey scent for no real reason.

It’s just when it comes with a cap hit of $3.6 million and not much else, you might start to worry.

The caveat of this all is of course that Sbisa is still young. Perhaps the Canucks can mold Sbisa into the player they want. Perhaps Sbisa becomes solid enough in his own end when playing with someone not named Bieksa, and all of a sudden you have a decent d-man who can match up against the big forwards on other teams.

It’s not unreasonable to wonder if that will ever happen, though.

I would have just turned around and gone home to make some mac and cheese. Good luck Luca, good luck.

Whether that help comes in the form of a new system, or better players, or perhaps arming the players with baseball bats as sidearms, something needs to be done.

It’s hard to imagine the Canucks management watching how the playoffs unfolded and saying to themselves “You know what? This is good. I like this.” The team broke down too many times in that series against an average opponent to think that the future of the team lies in the same defensive usage as last year.

I like Yannick Weber, I do. It’s just his secret Marvel power is his shot. He’s a power play specialist. I don’t feel he is a guy you want in your top four, eating up minutes. Hamhuis is currently being used to mask some of Weber’s deficiencies, something he used to do for Bieksa. The team basically needs another Dan Hamhuis to help babysit on two lines in order for things to work.

In a perfect world, Weber is in your bottom pairing (assuming they can even re-sign him to begin with). Alas, the bottom pairing currently is made up of Bieksa and Sbisa, making around 8+ million dollars. This is not a good situation.

The problem, of course, is where is the help going to come from? Frank Corrado has been utilized mostly as an flight attendant (he does make a mean in-flight taco), and Biega and Sanguinetti are still relative unknowns when it comes to their NHL footprint.

You of course can hope somebody wows the team in training camp (one of the Russians!) but that seems like a tenuous idea.

I know the in thing was to say goaltending was the fault for many years of playoff failure, but when you go through Luongo, Schneider, Miller and Lack, you have to start wondering if team defence is a bigger part of the problem.

If only the Canucks had Ballard, Raymond and a 3rd rounder to offer to other teams again.

If the Canucks make no trades, any improvements to the team have to come from their youth. Whether it’s Virtanen blowing CBC’s mind with his 19-year-old ways next year (hopefully 19 is the new 18 in 2016), or Brendan Gaunce showing up looking like Deathlok, the Canucks cap situation basically limits their ability to add via free agency. (Some people will be happy with this because young kids have to get into the lineup somehow, right? What better time than now.)

While the list of free agents isn’t very strong this year (Michael Ryder is a top free agent!), there are still some serviceable players on there the Canucks simply won’t be able to bid on. Christian Ehrhoff, the mercenary who used to dangle with the Sedins dangles, is a free agent, and would look very nice on the blue line again. Imagine having a power play defenceman who could actually complete a back door play again?

That being said, we all know how free agency works. Rarely are guys affordable, and usually they get overpaid for reasons we can’t quite figure out (Ryan Miller, what’s up). For all we know, Ehrhoff will get another 10 year contract offer from Buffalo before they realize they bought him out in the first place.

Regardless, it’s still worth noting that the Canucks would have to move some veterans (Bieksa? Miller? Higgins?) if they wanted some cap breathing room.

I had a Sbisa joke all lined up to end this section, but then I re-read that restaurant story and I decided against it.

Eddie Lack likes to play hockey. He would also, one would assume, like to be a starter.

Ryan Miller likes to play hockey. He also likes to be a starter.

This isn’t really a graveyard situation, it’s more of a timing issue. Eddie Lack is at an age now where he needs to show he can be a starter before he gets labelled with the dreaded “career backup” moniker and ends up playing a season in Carolina before retiring and becoming a new Sportsnet personality. 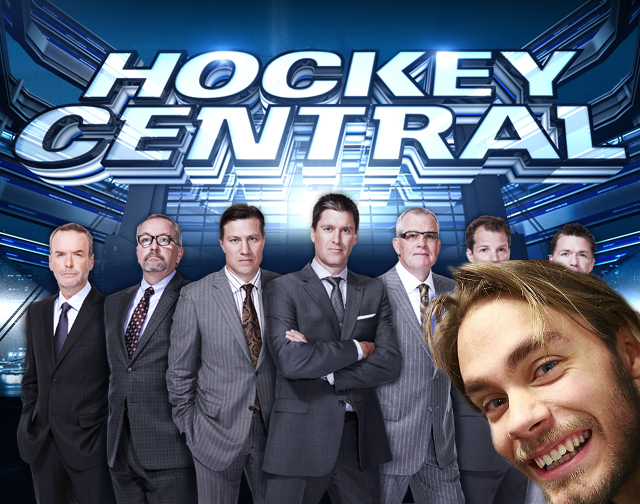 The Canucks have Jacob Markstrom in the pipeline, so you could theoretically trade Eddie Lack and go with a Miller/Markstrom combo that is much more in line with veteran starter and upstart backup scenario. The problem is of course Markstrom is far from proven, and if Miller misses time due to injury, how much faith does the team really have in Jacob? The team barely played Markstrom when Miller was injured, but maybe we can chalk that up to Willie D’s insistence on riding his starter harder than a well placed 50 Shades of Grey reference.

There is also the other side of the coin which is can you find a way to trade Miller instead? This scenario is one to look at due mostly because of Miller’s salary cap situation. At $6 million a year, Ryan Miller has to prove without a doubt he is worth that money. Looking at goalies like Mrazek, Hammond and Dubnyk step up for their teams this year, it might be tempting to take a salary cut at the goalie position and just ride the hottest hand of a couple of underpaid goaltenders.

Or maybe both goalies get along like gangbusters, and Eddie Lack naturally slides into the starting position by the time Miller’s contract runs out? Things are never that easy in Vancouver, though.

Next season can’t come soon enough, mostly because it will mean Bennett will be 19-years-old.

June 20th, 2015- Sam Bennett’s Birthday. AKA the day we can stop talking about how he’s 18 and move forward with our lives #VANvsCGY