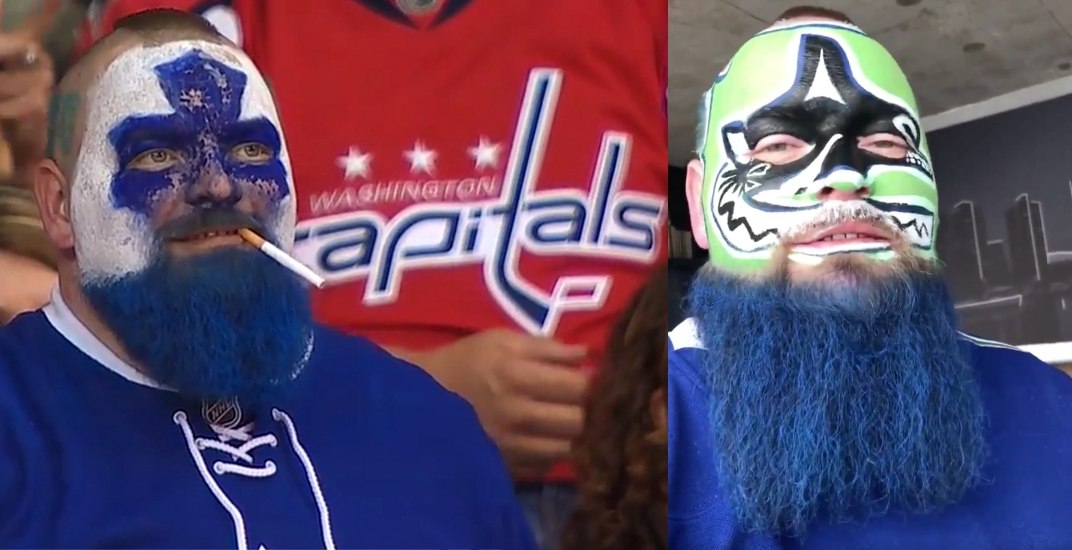 Having brought shame upon the city of Toronto, Leafs super-fan “Dart Guy” is ready for tonight’s game in Vancouver.

Except he’s not himself.

Instead of the blue and white face paint that made him famous, Jason Maslakow’s mug is painted blue and green. In place of a maple leaf, sits an orca.

I’m sorry #LeafsNation but I’m a man of my word and I honour my bets. I’ll just cheer extra loud for our boys tonight to make up for this…this…this… well there are no words @dallassmith @MapleLeafs @Canucks #WorstBetEver #LeafsForever vs #Canucks pic.twitter.com/BcRk7myFR8

“I’m going to puke,” he said, revealing his Canuck-covered face on Twitter.

The famous fan is making good on a bet he lost with Vancouver country music star Dallas Smith last season. Smith, who is a Canucks fan, boldly bet Maslakow that his underdog team would upset the Toronto visitors.

The Canucks won 2-1, meaning that Maslakow had to fly himself to Vancouver for the next Leafs game – which takes place this evening at Rogers Arena.

@LeafsMaz20 has invaded @Canucks territory. See ya at tomorrows game! Can't wait to show you what I'm wearing! @MapleLeafs https://t.co/pTQHJPTBKd

Had Toronto won, Smith would have had to fly east to watch the Canucks play in a Leafs jersey.

Since becoming a famous internet meme after he was shown on television at a 2017 Toronto Maple Leafs’ playoff game in Washington, ‘Dart Guy’ has gone on to host his own radio show on TSN 1050. He’s also the head scout for the Aurora Tigers Junior A hockey team.

And now, he’s a Canucks fan – at least in appearance for one night.