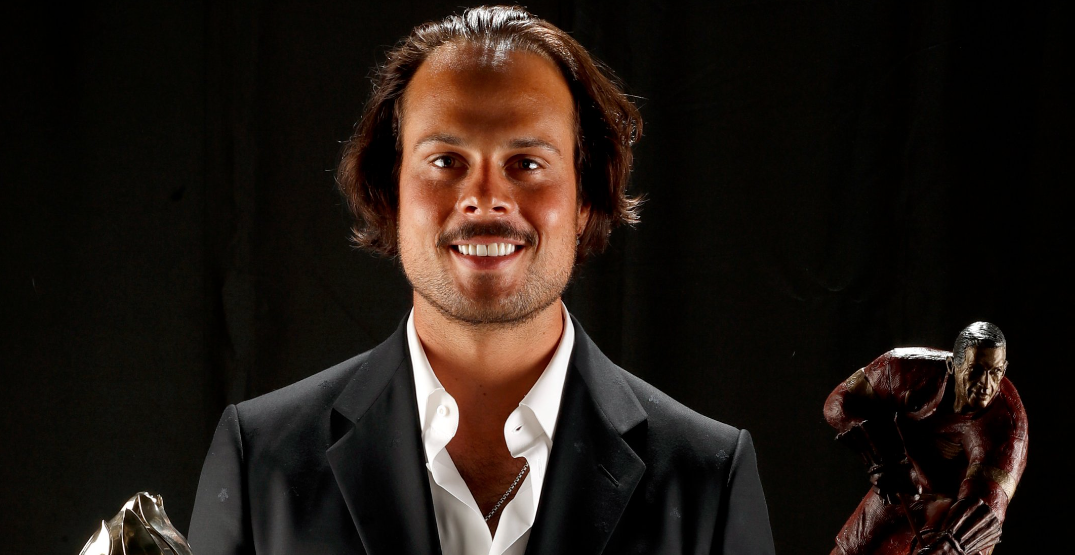 Auston Matthews was the star of the show at this year’s NHL awards — for a whole sort of reasons.

On Tuesday night, Matthews was selected as the winner of both the Lindsay and Hart Trophy, winning two different MVP trophies as handed out by the players’ association as well as the media.

Matthews completed what was unquestionably the strongest individual regular season in Leafs’ history, scoring a team-record 60 goals in just 73 games while adding 46 assists for a total of 106 points.

But outside of his trio of trophies as he’d previously won the Rocket Richard as the NHL’s leading goal scorer, Matthews was generating buzz for his — ahem — intriguing fashion choices.

“They said we could go somewhat casual. I don’t love wearing a tie, if I’m being honest with you. It’s hot,” Matthews told reporters about the awards show in Tampa, Florida.

Matthews was decked out in a Gucci suit, with his top button undone.

“Trying to go a little casual with ya tonight,” he added. “Let the chest breathe a little bit. It’s sticky out there.

But sparking even more conversation than the style was Matthews’ hairline. Choosing to slick his hair back, Matthews’ signature forehead was on full display for the photos.

Fans had plenty of opinions about Auston Matthews’ look at the NHL Awards:

Open collar with hairy chest showing, moustache, and the worst hair style on the planet.

congratulations to @AM34 for his hart trophy win pic.twitter.com/HAe1rWxG2f

No tie. Where's the tie? And don't tell me it's part of the Shoot Out ensemble!

Congrats to Auston Matthews on his Hart Trophy win but why does he look like Jack Nicholson from the 1970’s? pic.twitter.com/ksZK5xWTAr

can Kyle pls relax the dresscode. every interview this man is talking about the dresscode https://t.co/zyJ6SdNoqC

making the thumbnail for today and auston matthews looks like he's about to deliver a joke that will get his netflix special cancelled pic.twitter.com/vV2lIc7hxu

Auston Matthews is positively messianic figure among those of us who are growing our hair out and going bald at the same time. I salute you, my brother. https://t.co/89jGm8rwSm

Hairline chirps be damned, it was still one heck of a season from Matthews, who took home 119 first-place votes to Edmonton Oilers captain Connor McDavid’s 29 to win his first Hart Trophy.