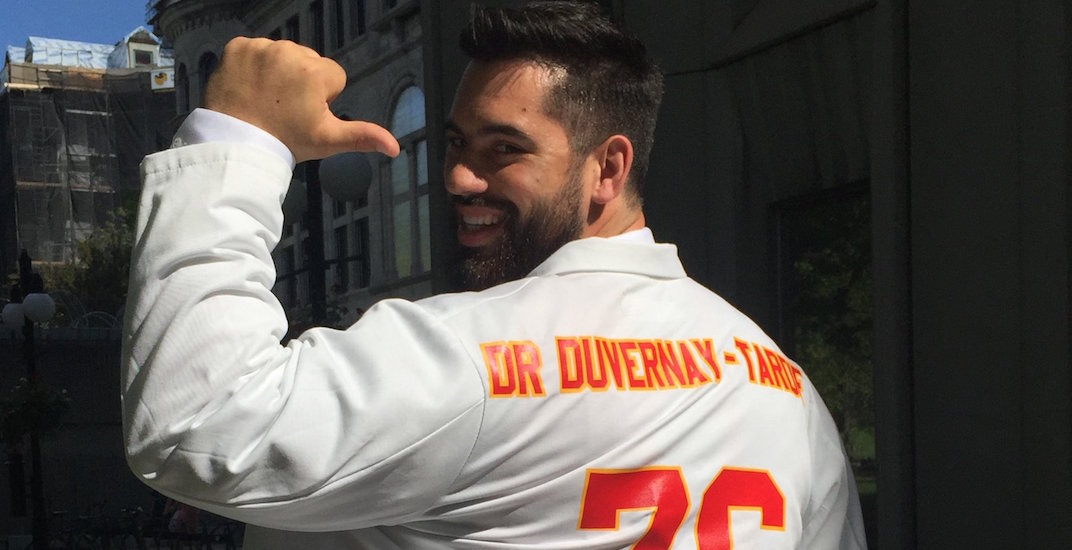 An offensive lineman with the Kansas City Chiefs, the pro football player is also a qualified doctor after he graduated McGill University’s medical school on Tuesday.

This is it! Today I become a doctor! It also marks the beginning of a great new adventure for all 2018 graduates of @mcgillu Faculty of Medicine. #LDTMD #graduation #passion #nfl #chiefs pic.twitter.com/j4oD1BCuXJ

“It’s official now,” Duvernay-Tardif tweeted upon graduating. “THANK YOU to all of you who supported me. If there was only one lesson to be learned from all of this is that with passion and determination, we are all capable of going beyond our limits! What’s next??”

Despite earning millions in the NFL – he signed a $41.25 million, five-year contract last year – Duvernay-Tardif continued studying medicine in the offseason even after being selected by Kansas City in the 2014 draft.

Though some NFL players have gone on to become doctors after their playing careers were over, Duvernay-Tardif is the first to achieve this status while still an active player in the league. It also means that the Canadian is the first player in league history qualified to request “M.D.” be added to the back of his jersey.

“I want to put Duvernay-Tardif M.D. on my jersey,” he told the Kansas City Star. “I’ve already started a conversation with the league office and they say that anything is possible.”

Indeed, when it comes to this 6-foot-5 lineman, anything is possible.

The 27-year-old plans to put his medical career on hold until after his pro football career is complete.

To the entire @Chiefs team: your support over the last few years as I’ve balanced my commitments on the field and in the classroom have been priceless. I’ve been able to follow a passion while playing another – THANK YOU! #LDTMD pic.twitter.com/goXcfZjtv7

Wow! What a ride. Congrats to all of my fellow graduates – can’t wait to see how much further you’ll all go. Huge THANK YOU to @McGillMed and @VPDeanEidelman for my experience and the flexibility you afforded me to help achieve my dream. #LDTMD
Photo: @Vincent_Ethier pic.twitter.com/juFEU09GaY