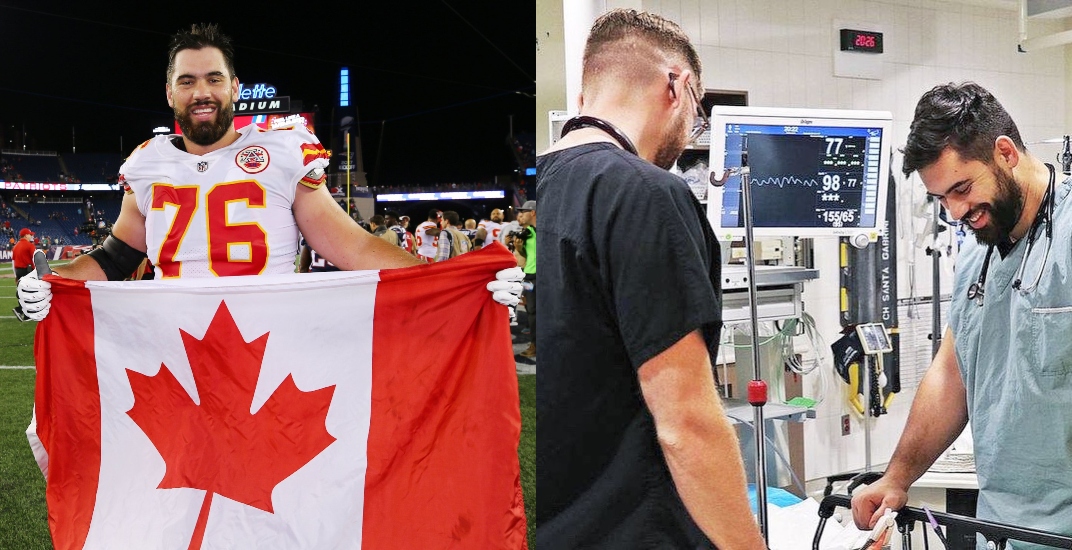 The term “hero” gets tossed around a lot in professional sports. Usually it’s hyperbole.

But in the case of Kansas City Chiefs lineman Laurent Duvernay-Tardif, describing him as a hero is 100% accurate.

Less than three months removed from winning the Super Bowl with the Kansas City Chiefs, the Montreal native is back in his hometown, working in his other profession.

Dr. Duvernay-Tardif completed a rare double-feat two years ago, graduating from McGill University’s medical school while still an active player in the NFL.

Despite the fact that he’s in the middle of a five-year $42.363 million contract to play professional football, Duvernay-Tardif offered to help using his medical expertise.

The 29-year-old has a doctorate in medicine, but isn’t licensed to practice yet. But given the current strain on Quebec’s healthcare system, Duvernay-Tardif and others like him are being granted an exception to help.

“They need help to replace the health care workers who have been sick and to help with the increasing demand, because of the increasing number of cases and because all the measures taken to protect health workers and patients slow down the operation,” Duvernay-Tardif told Sports Illustrated.

Duvernay-Tardif said his first day in hospital was April 24, where he was assigned to a long-term care facility, about an hour away from Montreal on the South Shore. The 6-foot-5, 321-pound football player is working in a nursing role, helping to relieve workers that were already in place.

Quebec has been the hardest-hit province in Canada during the pandemic, with long-term care homes particularly devastated, as Canadian Armed Forces members have been deployed to help.

“There’s so much that needs to happen just to visit with every patient—masks donned and hands washed and equipment like gloves and visors tugged on and off and thrown away,” added Duvernay-Tardif. “I handled a medication cart, making sure to administer the right dosage and in the proper way.

“Honestly, I was drained after — and looking forward to going back.”