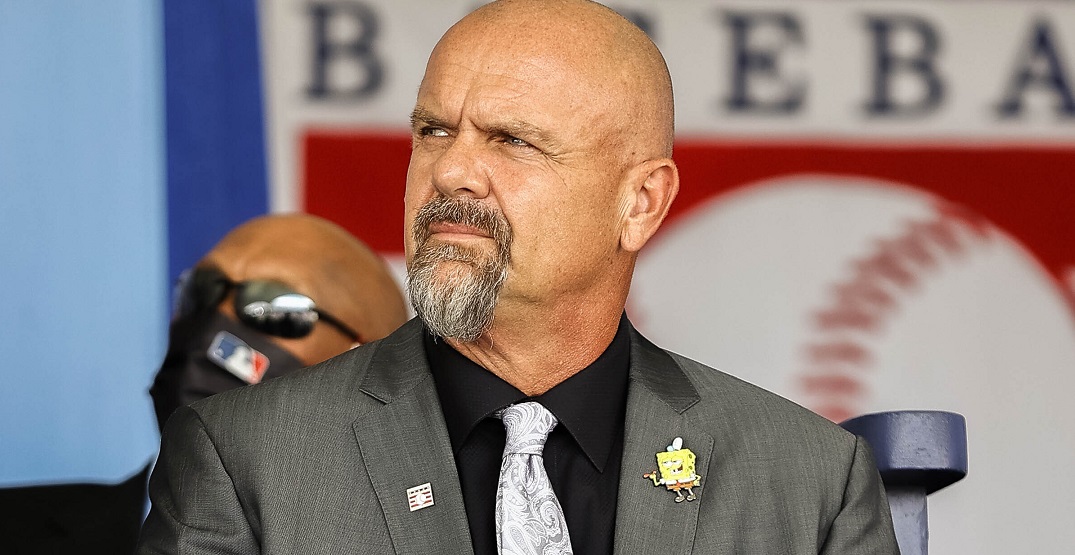 Canadian baseball legend Larry Walker was officially inducted into the Baseball Hall of Fame on Wednesday.

At an induction ceremony taking place outside of the Hall of Fame located in Cooperstown, New York, Walker was finally honoured for his great career with the Montreal Expos, Colorado Rockies, and St. Louis Cardinals.

Walker, born in Maple Ridge, BC, said he didn’t have the same level of competition as many players in the United States and around the world while growing up.

“We didn’t have high school baseball or any serious travel ball,” Walker said during his induction speech. “I played no more than 15 to 20 baseball games a summer until I was 16.”

Walker said he first began as a hockey player, but “unfortunately… or fortunately, I wasn’t good enough to be a goalie.”

Walker also gave a shoutout to what he called his “rhyming family”: mom Mary, dad Larry and brothers Barry, Carrey and Gary.

It wasn’t the only laugh of the day, however, as Walker documented an early rule violation during his baseball career where he cut over the pitcher’s mound from third base to first on a long fly ball without touching second base.

Walker was called out on the infraction.

“I touched it once. Why do I have to touch it again?” Walker said with a laugh. “Needless to say, I learned the rules and how to run the bases. I like telling that story because I know there’s kids out there that maybe don’t have the ability or experience. I tell them to keep fighting. [The fact that] I’m standing here right now is proof that hard work paid off.”

“I’ve never considered myself a Hall of Famer at anything,” Walker ended his speech. “I see myself as an average guy. But to stand on this stage right now, I’m telling you that I’m feeling average… would be a complete lie. My feet haven’t touched the ground all day.”

Walker, who joined pitcher Ferguson Jenkins as just the second Canadian player ever to be named to the Hall of Fame.

Jenkins was on hand for the ceremony, as was basketball legend Michael Jordan.

Congratulations came pouring in for Walker from many sources: fellow Canadian Joey Votto, the Toronto Blue Jays, and the Colorado Rockies, whose cap he will be wearing on his Hall of Fame plaque.

Larry Walker becomes the second Canadian-born player to be enshrined in the @baseballhall today.

Here are Joey Votto and @adnansvirk on the impact and greatness of the 🇨🇦 legend. #HOF2021 pic.twitter.com/ajbjOFO74P

The 2nd Canadian EVER inducted into the @BaseballHall 🇨🇦

Walker was initially inducted into the Hall of Fame in January 2020, but his actual ceremony was delayed a year due to the COVID-19 pandemic.

Walker made headlines for wearing a SpongeBob SquarePants shirt when he got the Hall of Fame call — and yes, the shirt is joining him in Cooperstown.

Walker even donned a SpongeBob pin on his special day.