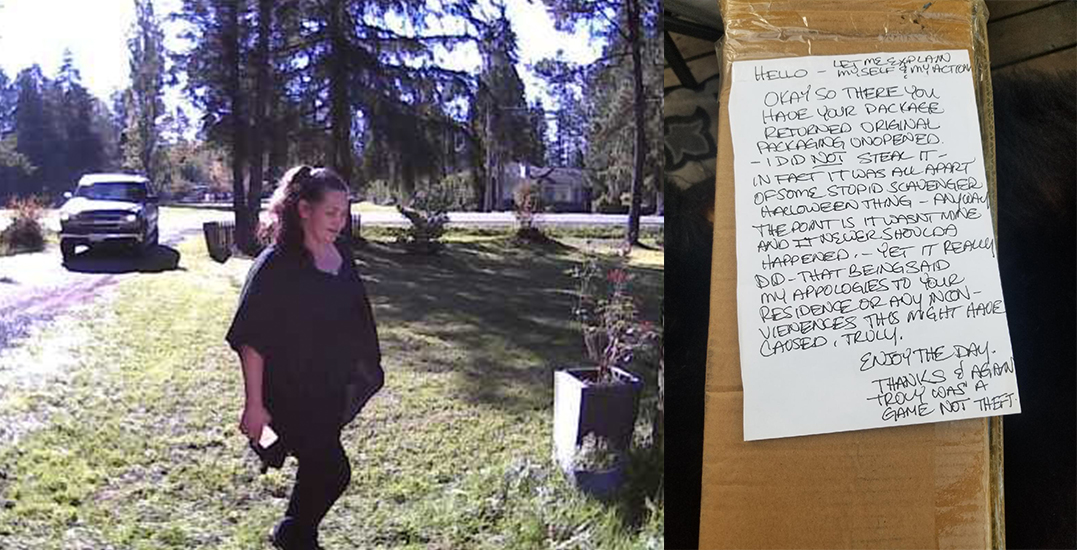 An alleged parcel theft that took place earlier this week has come to a bizarre end.

On Wednesday, October 17, Courtney Thomas of the Fern Ridge neighbourhood in Langley, BC watched a stranger take a parcel from her front porch.

The theft took place at noon, moments after a UPS driver dropped off the large package . A security camera installed at the front of her house captured a dark blue Chevrolet Tahoe rolling into her driveway.

The video shows a woman stepping out of the vehicle and briefly inspecting her surroundings. She proceeds to snatch the parcel and sprint back to the passenger side of the vehicle. Based on the recording, it’s unclear whether she’s the lone occupant of the vehicle.

Surveillance footage also recorded the moment that the UPS driver makes the delivery. As the deliveryman approaches the front door, the same truck can be seen slowly driving by. At the very end of the video, the truck makes a U-turn.

Thomas believes that the vehicle was following the UPS truck and explains that the video clips are taken moments apart.

Yesterday, in a bizarre turn of events, the same package was returned to her front door with a note attached. 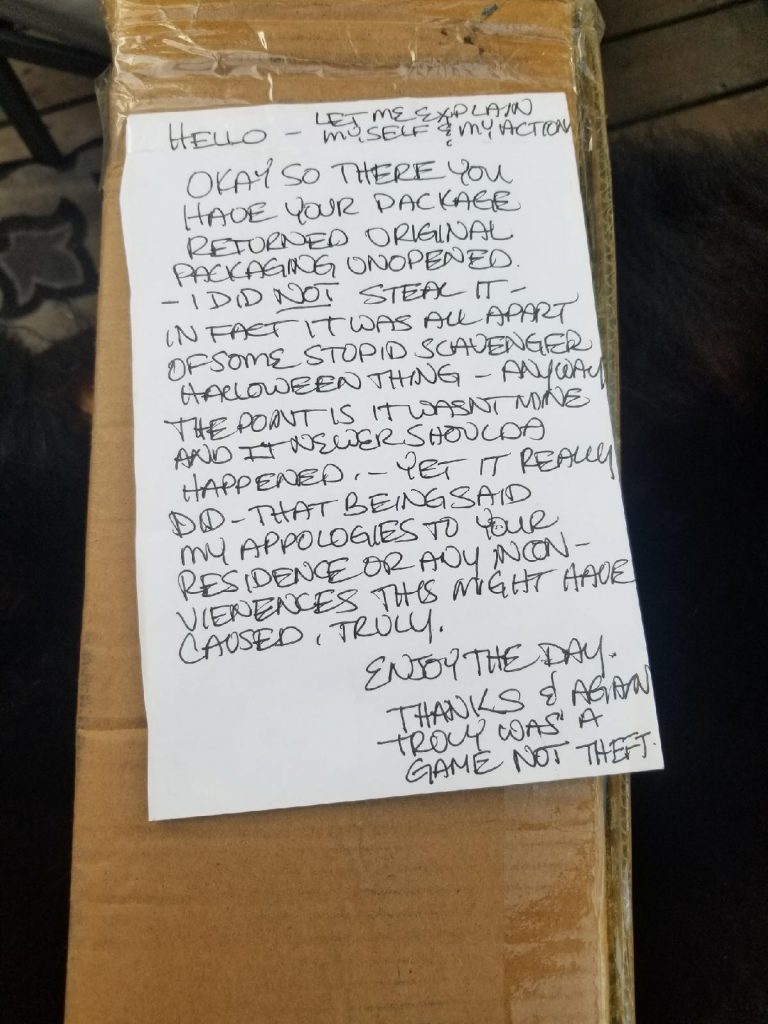 “Okay, so there you have your package returned original packaging unopened,” reads the note. “I did not steal it – in fact, it was all a part of some stupid scavenger Halloween thing.”

The letter ends by saying “Thanks and again, truly was a game, not theft.”

Unfortunately, the power was out at her home when the package was returned, so no video footage was captured.

This isn’t the first time the homeowners have dealt with theft. In fact, it’s why they have surveillance cameras installed in the first place.

“We moved to this house hoping for a quieter, safer, more close-knit community,” Thomas explained to Daily Hive. “Technically, the first robbery started before we even unpacked.”

Before the couple had even finished moving into the residence, they had their copper piping stolen out of the house.

A pair of ATVs were also stolen several weeks ago, one of which had belonged to Thomas’ late father. It was then that she had some high-tech cameras installed into her household.

“My brother works at RSL Refrigeration and helped install the camera,” she says. “Now, when someone enters the motion sensor zone, I get an email alert and can log into the app for a live feed and can download clips.”

At this point in time, Thomas is still waiting to hear back from the police.

“I distributed the photo and videos to other members of the police,” she says. “I haven’t been able to reach them again since the initial report though.”