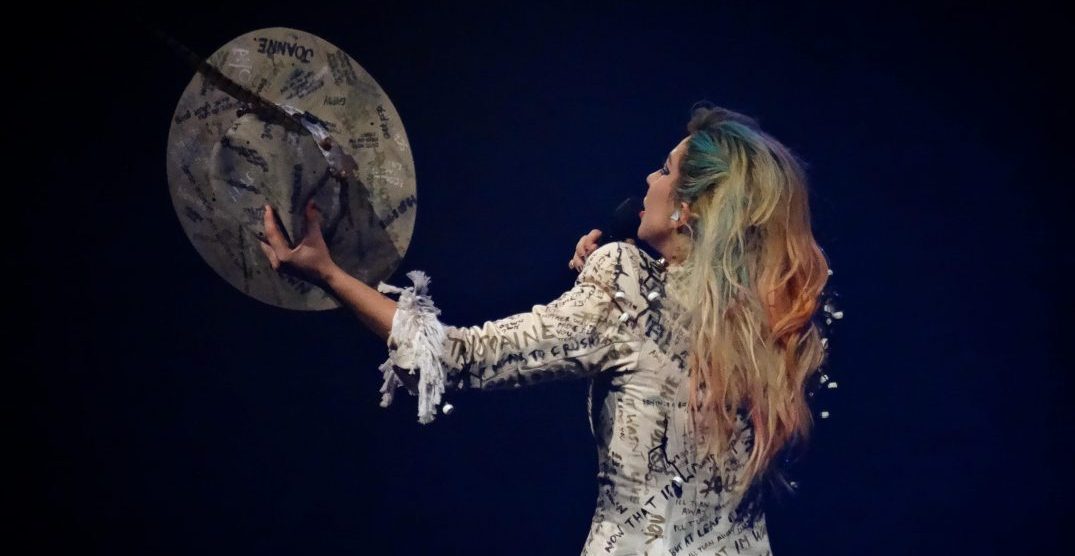 The diva is on the road promoting Joanne, a stripped-down collection of songs intended to undo the catastrophic damage caused to her career by 2013’s Artpop.

Like most Lady Gaga albums, Joanne debuted atop Billboard’s Album chart last fall but failed to generate a major radio hit (the country-tinged “Million Reasons” eventually sold a million copies, but only after being deeply-discounted in the iTunes store for weeks).

Even Gaga herself appears to have moved on from her stint in Lilithland; she released non-album track “The Cure” in April which may have signaled a return to her tried-and-true Fame Monster formula.

Vancouver fans going into Tuesday night’s show had no idea what to expect: would Gaga go full-on country? Would she debut any new songs from her upcoming film A Star Is Born? Would she offer refunds to the hundreds of fans in attendance who bought Artpop?

Mother Monster kept fairly mum on tour details in the days leading up to the show’s debut. She gave the internet a sneak peek of Joanne merch on Instagram and revealed a new hairstyle for the tour, but fans were kept in the dark as to what songs she’d perform and how they’d be arranged until show time.

There was no opening act to welcome fans to Tuesday night’s spectacular, unless you count the poor sucker who had to announce that the show would be delayed due to technical difficulties. At precisely 9:10 pm, 40 minutes after Joanne‘s advertised start time, Gaga appeared on the arena’s main stage in a black fringed number topped with a pink sequined cowboy hat – like a rhinestone cowgirl, more or less.

First up were “Diamond Heart” and “A-Yo”, both from the new album, followed up by 2008’s “Poker Face”. Gaga and her dozen backup dancers spent the first half of the concert on the main stage, leaving many fans on the floor wondering why they showed up hours early to crowd around satellite stages that served no purpose.

But after ten songs (and three meh video interludes), bridges were lowered from the arena’s ceiling that allowed Gaga & company to travel from stage to stage above the crowd (there were four stages used in total). Upon her arrival at the opposite end of Rogers Arena, the singer chatted happily with fans standing near her piano and even asked a security guard to hand her an audience member’s pride flag.

“As you know, I have a lot to say about this issue,” she said while waving the flag. “But the most important thing that I have to say is that everybody’s gotta love each other. You gotta stop throwing stones at your sisters and your brothers.”

Seated at the piano, she tore into a lovely version of “The Edge of Glory” that was far and away the highlight of the night. It served as a reminder that, when stripped of the bells and whistles, Gaga can captivate tens of thousands of fans with just her voice alone. She dedicated the song to her loyal little monsters, saying “whenever I’m on the edge, in my moments, by myself – you’re always standing there with me. I can feel it.”

The hits kept coming courtesy of “Born This Way” and “Bad Romance” before the show wrapped up with encore of “Million Reasons”. Despite a couple of technical glitches, the show was a visual treat complete with laser beams, fireballs, and a half-dozen of costume changes. Gaga did not allow any professional photography at the show, so here’s what Joanne looked like from the crowd.