As promised, Starbucks Canada is upping their game for 2015, and they’re starting with the launch of baked goods from the acclaimed La Boulange Bakery, which will debut at B.C. locations this March.

In 2012 Starbucks bought La Boulange, already a popular San Francisco bakery, and in 2013 they launched their products at the company’s U.S. locations. On March 3, 2015, the La Boulange goodies will be introduced to the Canadian Starbucks market, with a rollout in British Columbia and Ontario.

La Boulange’s founder Pascal Rigo said one reason they wanted to begin in B.C. was because of our reputation for being a food-focused province. Rigo also says that in order to best serve customers in the region they are producing the baked goods locally, using high-quality ingredients sourced from the area.

The La Boulange line is butter-forward, to say the least, in particular their plain and chocolate croissant made with their 100 per cent butter croissant dough. Starbucks patrons who have been ordering croissant will definitely notice the difference; the La Boulange croissant are buttery and indulgent, and worth every calorie. 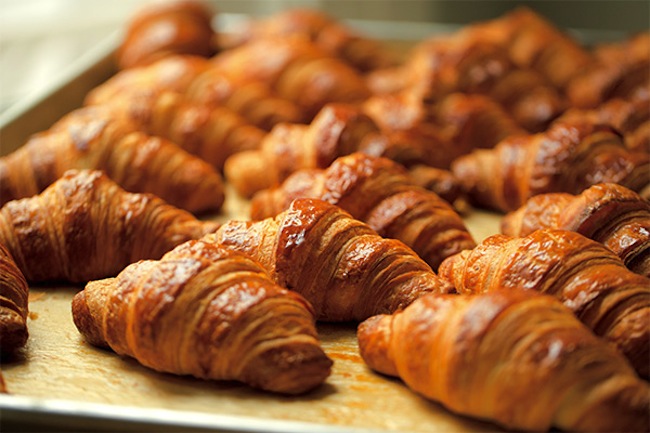 Other items on the La Boulange roster are Cheese Danish, Almond Danish, Orange Cranberry Scone, Blueberry Scone, Double Chocolate Brownie, Flourless Chocolate Cookie, and a Marshmallow Dream Bar. Each of the pastries works particularly well with certain coffees on the Starbucks menu, too.

Starbucks Canada will introduce La Boulange baked goods in the rest of Canada in two additional waves; they’ll arrive in Quebec and Atlantic markets at the end of March and in Alberta, Saskatchewan and Manitoba in June.