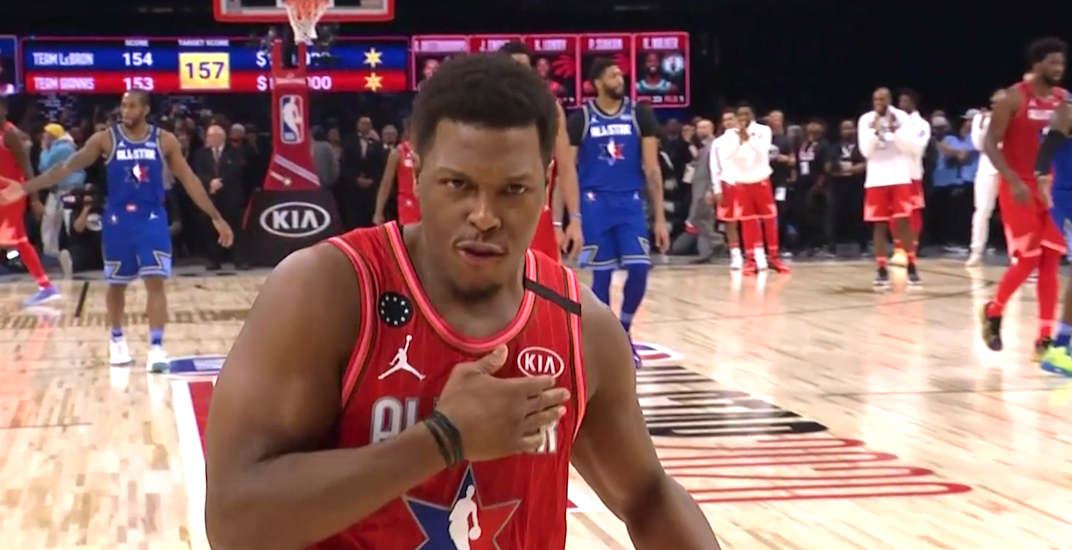 Millions of basketball fans across the globe tuned in to the 2020 NBA All-Star Game held in Chicago, and even with names like LeBron James, James Harden, and Giannis Antetokounmpo competing, it was Lowry that dominated the online conversation.

During one of the greatest All-Star Games in NBA history — perhaps even across all sports — Lowry brought that same intensity seen in Toronto on a night to night basis and his presence was felt not only by those on the court, but anyone watching.

When push comes to shove, at the end of a competitive basketball game, the 10 best guys are on the floor. Now with it being the All-Star Game, it means these were some of the best players on the planet and of course there was Lowry, right in the thick of it, making plays.

Defensive plays… like taking a charge on his former Raptors teammate Kawhi Leonard.

.@Klow7 gotta be the all-time leader in charges at an #NBAAllStar game, right?? pic.twitter.com/EjBI78f6qr

Or getting right up in the jersey of James Harden in order to take yet another charge.

.@Klow7: HEART OF A CHAMPION pic.twitter.com/CLzYLNJ3yy

He even stared down the freight train that is LeBron James and sacrificed his body in an attempt to take a charge.

Now you might think there isn’t anything impressive about taking charges, but for the untrained eye, it is the kind of hustle play that can completely swing the momentum of a game. Lowry was making those hustle plays all night long…AT AN ALL-STAR GAME. I mean I would almost go out on a limb and suggest that the word ‘hustle’ has never been used to describe anything about an All-Star Game prior to this.

Lowry’s fourth-quarter energy completely took over the feeds from global media on Twitter.

I think we finally figured out what the All-Star Game needed: More Kyle Lowry.

Watching Lowry make winning plays explains why Toronto is the number 2 seed in the East!!! Carry on…

Of course the charges were a hot topic in his post-game media scrum as well.

To go along with the defensive energy, the Raptors point guard also tallied his share of highlight reel plays on the other end.

The 33-year-old finished the game with 13 points, eight assists, and five rebounds, however, there were several other moments outside of Lowry’s antics that put smiles on the faces of Raps fans.

Lowry’s ‘beloved’ teammate Pascal Siakam played alongside Lowry on Team Giannis, which was coached by Toronto bench boss Nick Nurse and his staff.

It was only fitting that their opponent, Team LeBron, featured a familiar face: Kawhi Leonard.

Pascal Siakam and Kawhi having some fun out there, which brings a smile to the face of Nick Nurse. #NBAAllStar pic.twitter.com/UTGQHbtJNk

Amid the competitive game, there were a few moments the cameras caught Leonard and his former teammates having a laugh.

Team Giannis ultimately fell 157-155 to Team LeBron in a thriller.

Now as much as I’d like to think that Lowry’s hustle was simply because of something cliche like having ‘the heart of a champion,’ it wasn’t. It was directly linked the All-Star Game getting a facelift.

Typically these marquee gatherings of elite athletes in any sport are boring.

Whether it’s the NHL All-Star Weekend or the NFL Pro Bowl, all-star games generally struggle with the same issue: a lack of effort from participating athletes.

The NBA has been no different, which led to some radical rule changes for this year, including charitable incentives and a unique scoring format that saw each quarter become it’s own mini-game and the overall winner being the first team to reach a set target score.

Needless to say, it worked.

As the second-half got underway, coaches tightened their rotations, players on the benches as well as fans remained on their feet, and the guys on the floor were physically and emotionally giving their best effort.

Team LeBron walked away with the win, earning $400,000 for the Chicago Scholars Foundation as a result of their performance, while Team Giannis raised $100,000 for After School Matters based in Chicago as well.

After receiving the award, which was renamed this year in honour of Kobe Bryant, Kawhi responded in a classic ‘Fun Guy’ way.

“We wanted to get to 157 points before they did,” Leonard told TNT’s Ernie Johnson.

Blunt and to the point. Some things never change.

The Raptors will have a few more days to reset before kicking off the final stretch of their regular season on Friday against the Phoenix Suns.

In the meantime, NBA players, fans, and media members can look back on one of the most memorable games in recent memory and say ‘that was fun.’

Man, that was fun. pic.twitter.com/MsF2L1dvXZ