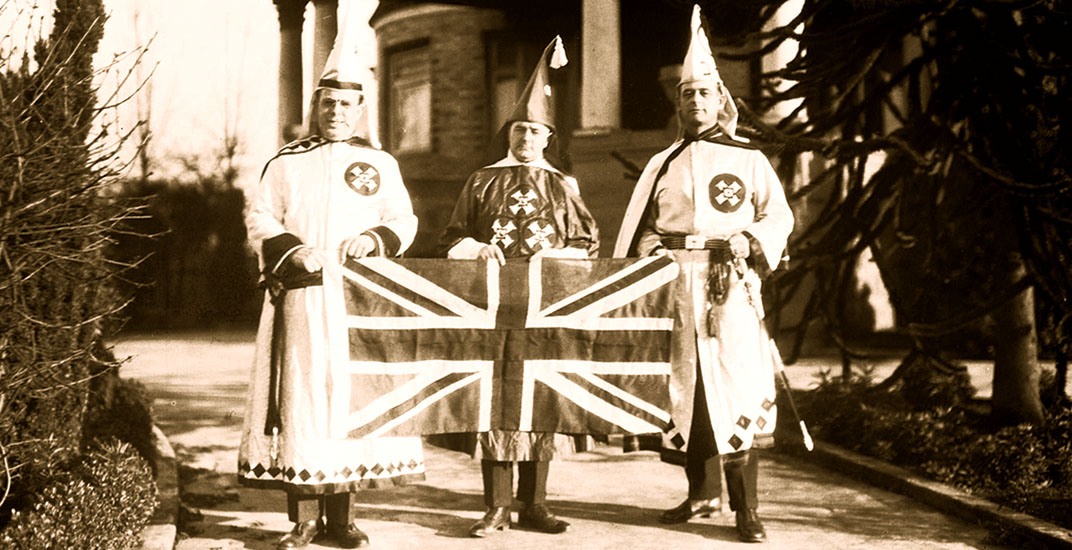 The "Imperial Klouncil" of the KKK outside Glen Brae Manor, holding a Union Jack. Photo by Stuart Thomson, City of Vancouver Archives #99-1496.

The Ku Klux Klan is a uniquely American phenomenon, but in the 1920s Klan organizers decided to spread their venom internationally.

They set-up chapters in Saskatchewan and other locals east of the Rockies. During their brief time in British Columbia, organizers spent their energy trying to convince the public that the Klan wasn’t the barbaric, homicidal, terrorist outfit described in the papers.

Vancouverites knew about the Ku Klux Klan long before their 1925 arrival in Shaughnessy. The original Klan was an obscure racist vigilante group, active in the late 1860s and early ’70s, that sought to restore white supremacy in the American south following the emancipation of African Americans. They would have been a minor footnote in American history if not for Thomas Dixon’s immensely popular book, The Clansman. 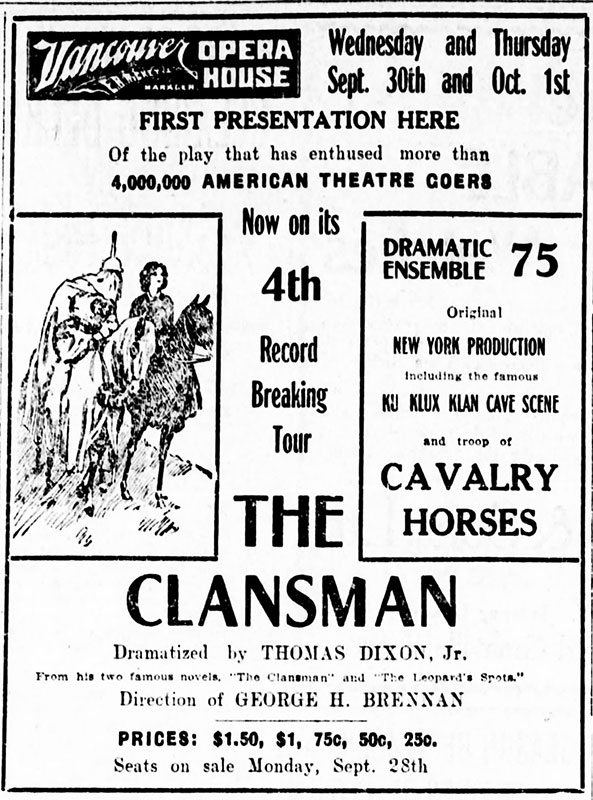 Ad for The Clansman, a play based on Thomas Dixon’s 1905 novel, at the Vancouver Opera House. Daily World, 30 September 1908.

Dixon’s 1905 novel is a tawdry revisionist history, that recasts the Klan as saviours of white America in the aftermath of the Civil War and the end of slavery. It was adapted into a stage play that came to Vancouver in 1908 and again in 1910.

In 1915, the first epic Hollywood blockbuster came to town, Birth of a Nation, which was based completely from The Clansman. The local black population demanded that the film be banned, but to no avail. 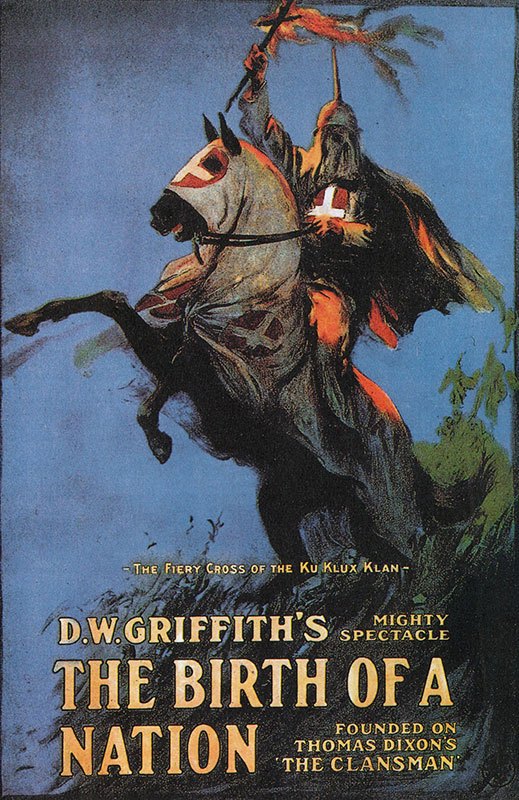 Poster for DW Griffith’s 1915 film, Birth of a Nation.

Unfortunately, Birth of a Nation also happened to be a groundbreaking and, for its time, a technically spectacular film. It redefined American cinema, and was immensely popular. The film would inspire a resuscitation of the Ku Klux Klan. 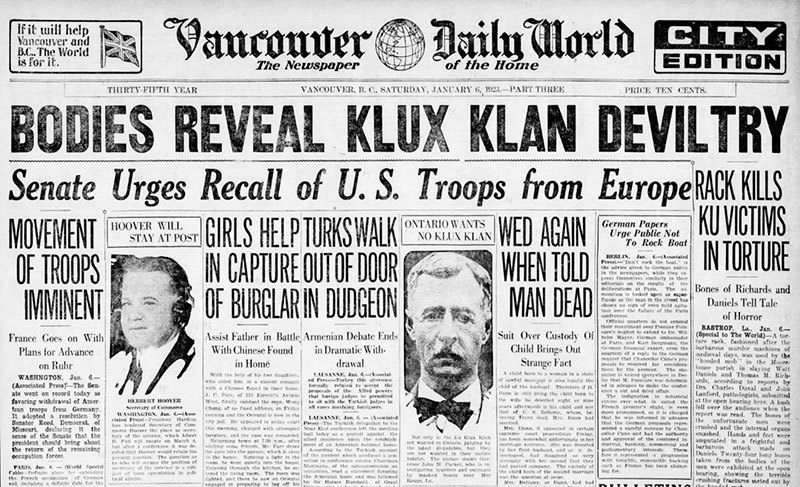 A newspaper headline about Klan terrorism in the States before they came to Vancouver. The Klan’s reputation made it impossible for organizers to convince the public in BC that they were a law abiding and non-violent fraternal society. Daily World, 6 January 1923.

After years of rumours, American Klan organizers finally arrived in Vancouver in October 1925, making a splash by parading along Granville Street, to their new headquarters at 1690 Matthews Avenue in Shaughnessy Heights. For $150 a month, they rented Glen Brae Manor, a 16,000 sq. ft. mansion. 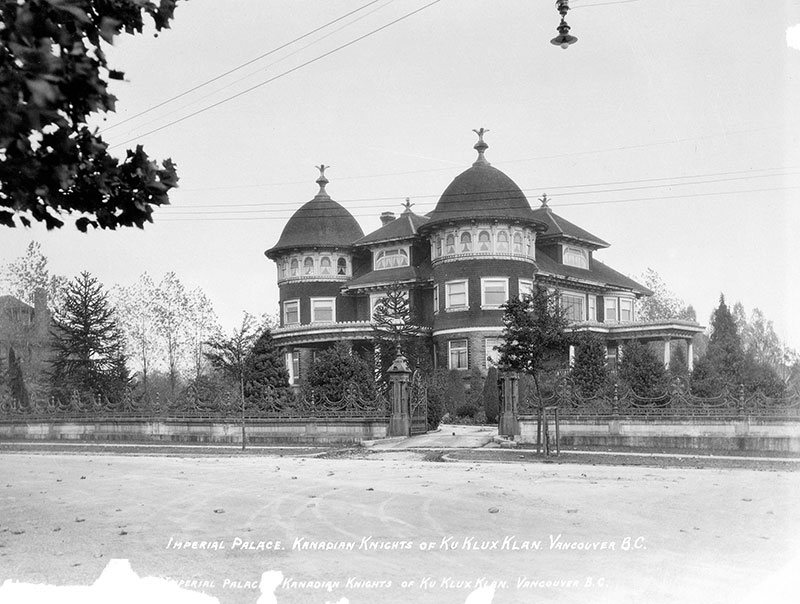 Shaughnessy residents were mortified when they found out about their new neighbours, and demanded they be evicted for violating the 1914 provincial law restricting Shaughnessy properties to residential purposes.

Meanwhile, the head of the new KKK chapter, Luther Powell, had returned to the US and was denied re-entry into Canada on the grounds that he was an “undesirable.”

The denial wasn’t solely for his Klan association, but also because Powell told border officials he was a salesman. They weren’t convinced and he could not prove that he had any legitimate means of supporting himself while in Canada. Other Klansman had similar issues at the border. 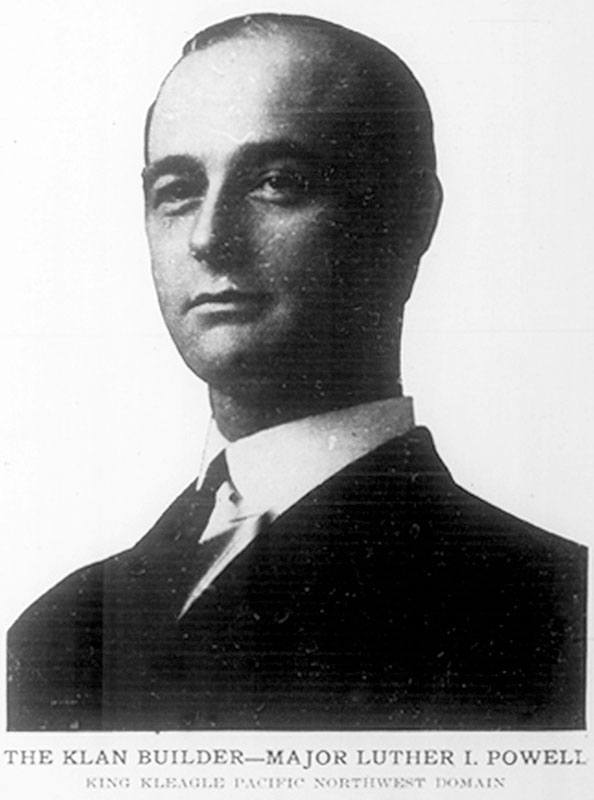 Luther Powell, the “Imperial Klazik” of the Vancouver Klan, from a Seattle KKK newspaper, The Watcher on the Tower, 27 October 1923.

Luther Powell was from Louisiana, but had been organizing KKK chapters on the West Coast since 1920. He organized dozens of chapters and had the most success in Portland, Oregon, a state with a deep history of white supremacy.

Powell’s critics claimed that he was mainly motivated by greed – steep membership fees made organizing the Klan very lucrative.

A concerned former British Columbian living in Oregon wrote the BC Provincial Police to warn about Powell:

This rascal is well known in Oregon. This scheme is to try and get as much money as he can by organizing the Ku Klux Klan. They worked Oregon out and when the field became too tame for them now seek their work of destruction in BC. Powell and his followers caused trouble in Oregon and injured our State to the extent that it will take years to regain Oregon’s good name. Powell is devoid of common decency and can do nothing but harm in the place of my birth, BC. 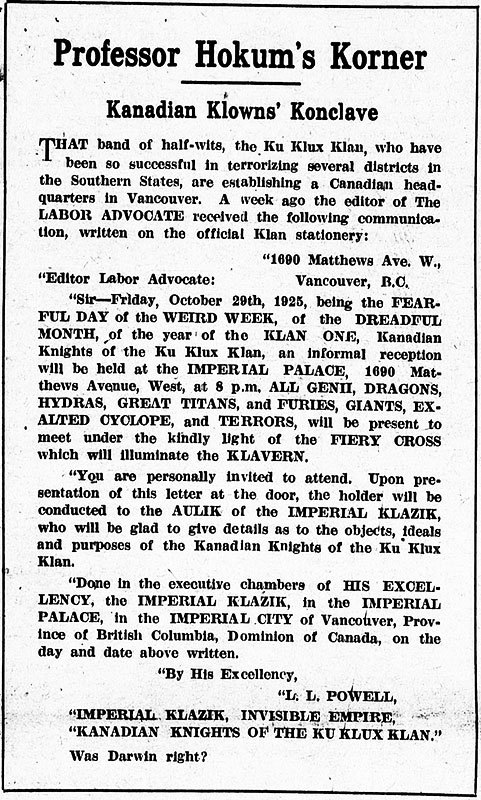 An invitation to the opening reception at Klan headquarters, with commentary, published in the Labor Advocate, 6 November 1925.

Another report from the States accused Powell of defrauding Klan members of more than $100,000. Powell headed north after being pushed out of the Oregon Klan.

Attorney General A.M. Manson referred to Powell as a mercenary “of a very doubtful character.” The Klan’s literature, he wrote to Thomas Mulvey, Canadian Under Secretary of State, was of a “very flamboyant ultra-patriotic and highly exaggerated type, – a type that we in this country have little use for.” Manson denied the Klan’s application to incorporate in BC because they were likely to engage in unlawful behavior and wore hoods in public, making “their personal identity difficult of determination.” Manson was also offended by the Klan’s habit of spelling “Kanadian” with a “K.” 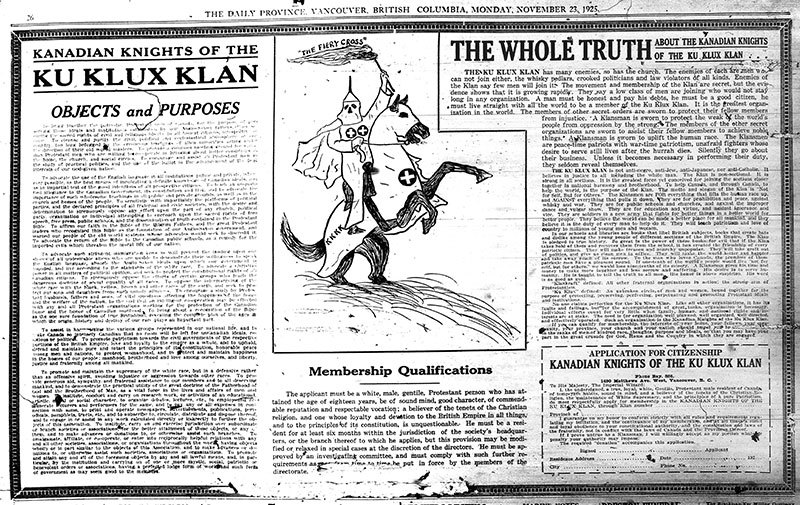 An advertisement for the KKK in the Daily Province, 23 November 1925.

While Powell appealed the decision to bar him from Canada, his supporters held a public meeting at the Hotel Vancouver to make their case. A “small army” of RCMP, Vancouver, provincial, and CPR police were on hand just in case. The disappointed audience came for the spectacle, but no hoods were worn and the speakers spent their time trying to convince the audience that Klan members were law abiding, at least in Canada. The most excitement, according to a Sun reporter, were hecklers deriding the fact that all but one of the Klansmen present were American. 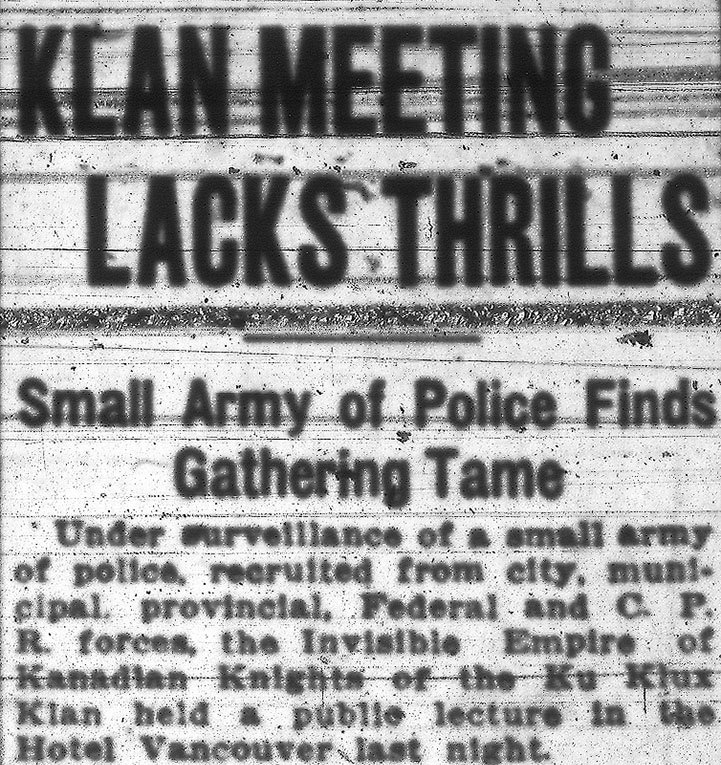 Luther Powell did finally get permission to enter Canada on a 30-day permit. While here he sent a telegram to Victoria requesting an audience at the legislature to make the case for a British Columbian KKK. Premier Oliver called the request “preposterous,” and ignored Powell’s telegram. 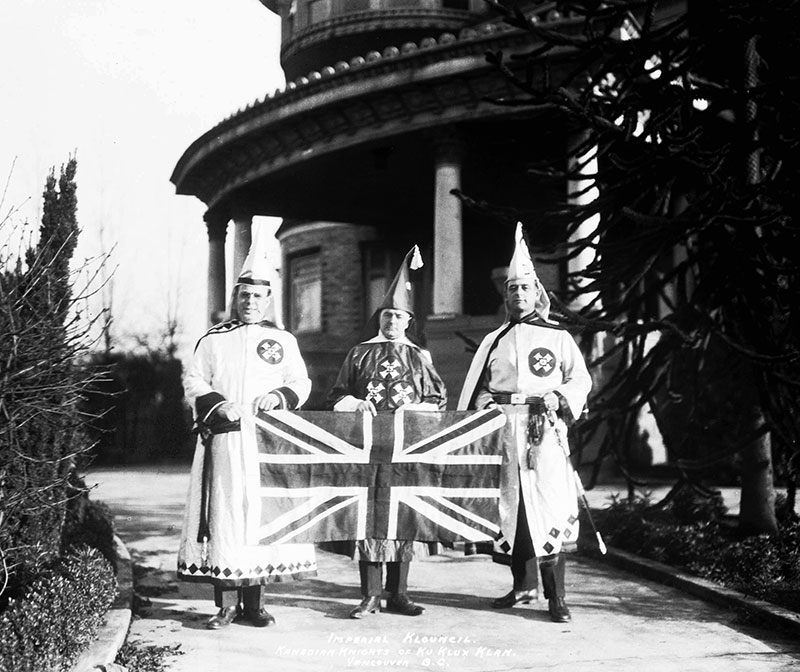 The “Imperial Klouncil” of the KKK outside Glen Brae Manor, holding a Union Jack. Photo by Stuart Thomson, City of Vancouver Archives #99-1496.

A fraudulent, alien, terrorist organization known as the Ku Klux Klan is attempting to organize in British Columbia;

And that the purpose of this body is to perpetuate and promote religious hate among our citizens, and substitute lynch law for duly constituted authority;

And that the past record of this society is one of murder, violent assault, and unspeakable crime.

Therefore, we would urge your government to take the necessary steps to restrain this seditious movement and bar its membership from all elected or official positions under the Crown.

The resolution was ruled out of order, watered down, and hotly debated. Some argued the resolution violated free speech, and one MLA suggested some of his fellow MLAs were Klansmen – the Klan claimed five MLAs were members).

MLA Major Burde said he had carefully studied the KKK, and that as a white Protestant gentile, he was able to be objective in the matter. He criticized the Klan for putting “Catholics and negroes on the same plane,” but said the organization would have value if they focused on “running the Japanese and Chinamen and Hindus out of British Columbia.” 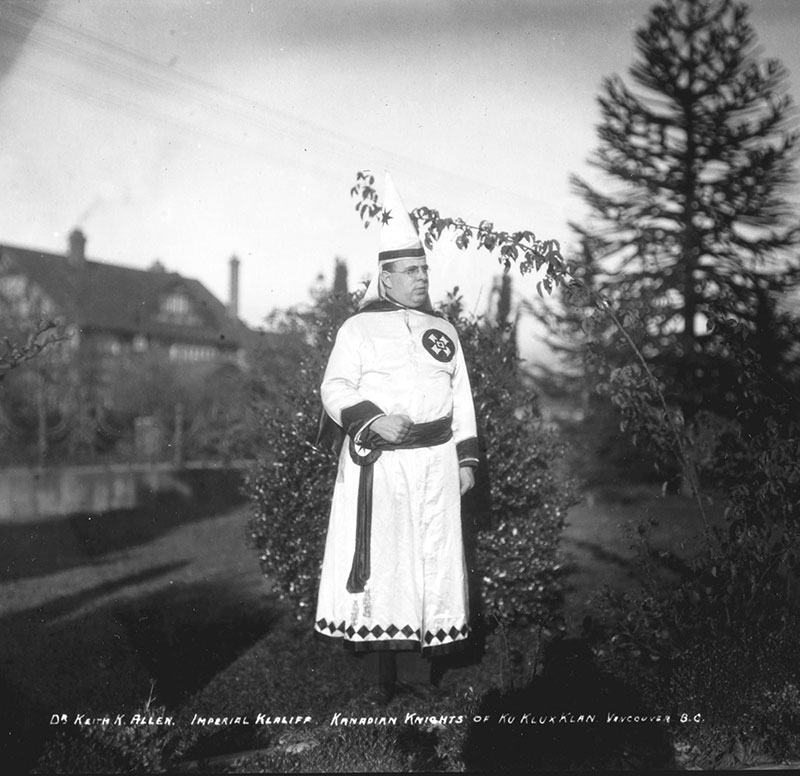 Ultimately the resolution was rejected on the grounds that it would be legally meaningless. At another sitting of the legislature, Labor MLA Tom Uphill from Fernie received a letter signed by the KKK that ominously read “You are known.” Uphill told the house that “they’ve been carrying on their tomfoolery at my hotel, too… Yes, Mr. Speaker, I am known.”

For reasons unknown, Luther Powell was booted from the BC Klan that he started. He went to Victoria to organize a Klan for women. Again he was kicked out of the group, and the women lobbied to have him deported. Powell eventually moved back to Louisiana and became active in the fascist movement there in the 1930s. By one account, he embezzled funds from a fascist organization and caused its demise. 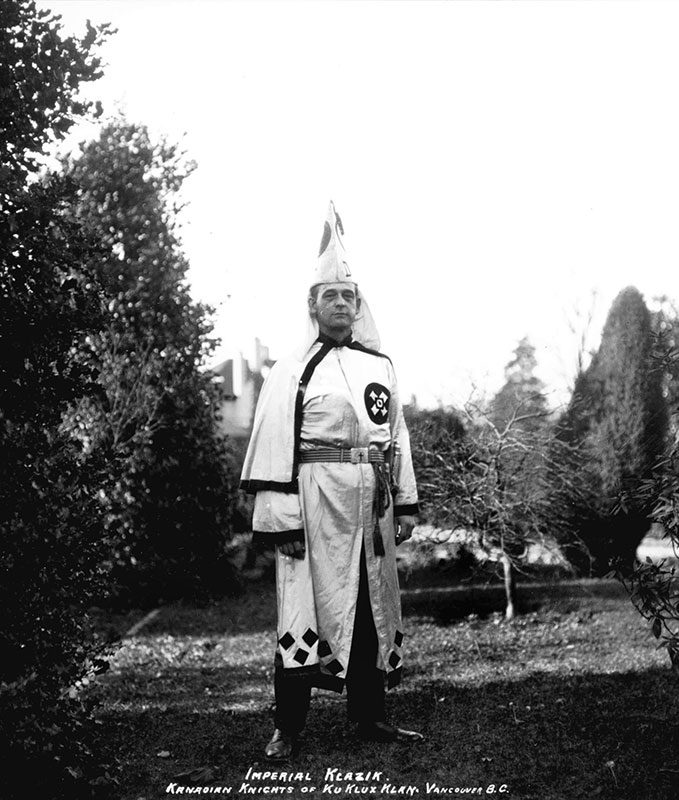 There were local Klansmen as well. The most high profile was Reverend Duncan McDougall, a zealot and bigot who used the pulpit of his Highland Church on 11th Avenue to vent his hate.

Little is known about the KKK that remained once the Americans left, likely because they didn’t accomplish much. The most notoriety they achieved was in the aftermath of the 1925 Janet Smith murder when hooded Klansmen kidnapped and tortured a Chinese houseboy they accused of killing Smith, a nursemaid working in Shaughnessy Heights. Reverend McDougall used his magazine, The Beacon, to promote his conspiracy theories about the case, and to praise the Ku Klux Klan. At one point he officially turned the magazine over to the Klan and renamed it The Bisector. 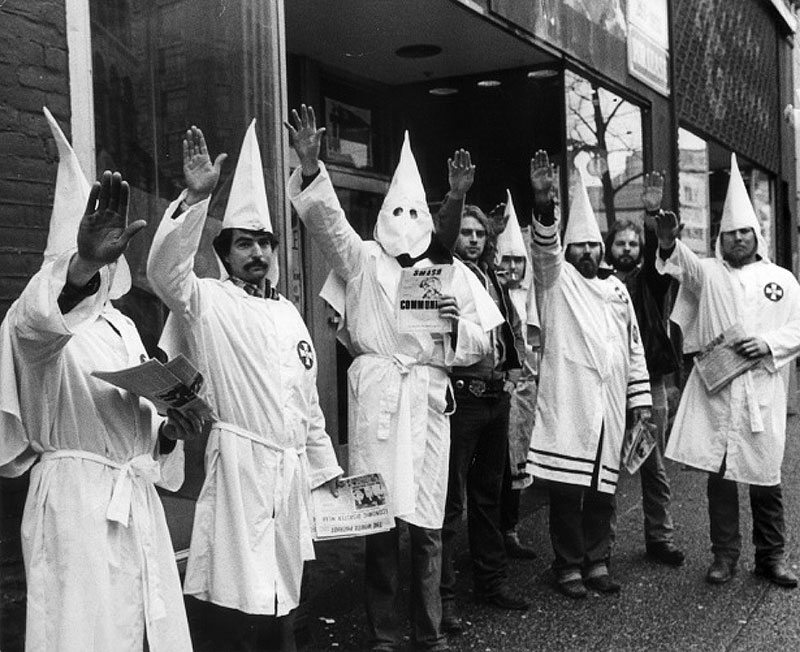 Even though racism was at an all-time high in 1920s Vancouver, the fledgling KKK faded by the end of the decade. It would be many years before the Klan returned to the Terminal City, but return it did.

Echoing the experience of fellow Louisianan Luther Powell, Klan Grand Wizard David Duke came to Vancouver in 1979 and again in 1980, when he was arrested on April Fools Day at Hotel Vancouver for being an “undesirable.” His comments on a radio show drew many complaints, as did the revelation that he had misrepresented himself at the border by failing to mention his stateside conviction for inciting a riot. 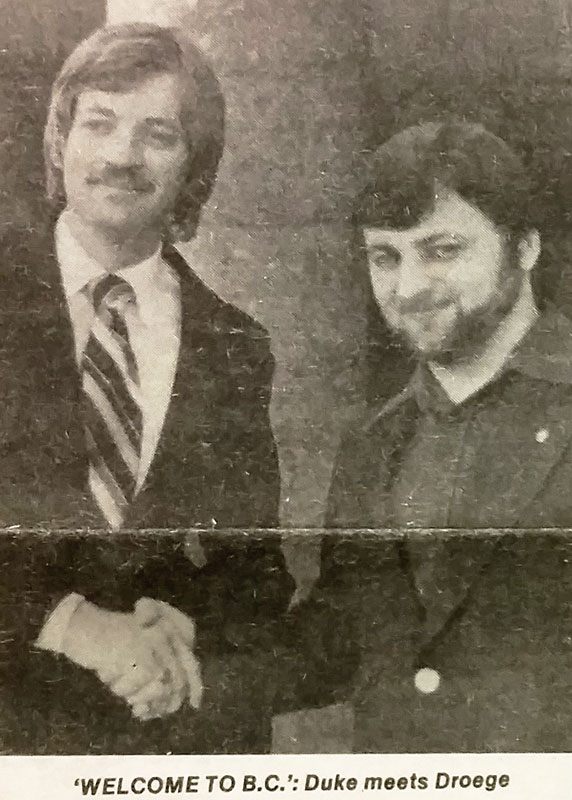 The Klan’s racism didn’t seem to bother too many people in the 1920s, but it was a different story in the 1980s. The Black Solidarity Association demanded that the government follow Australia’s and Britain’s lead by banning Duke. Anti-Klan and anti-racist demonstrations were held in response to the Klan and other racist organizations throughout the Lower Mainland in the 1980s.

The group’s Western Canada organizer, Wolfgang Droege, claimed that the Klan had about 200 members and was growing fast in 1980. They planned on setting up an office, but Alderman Harry Rankin got a motion passed requiring the group explain themselves to city council before being granted a business permit. 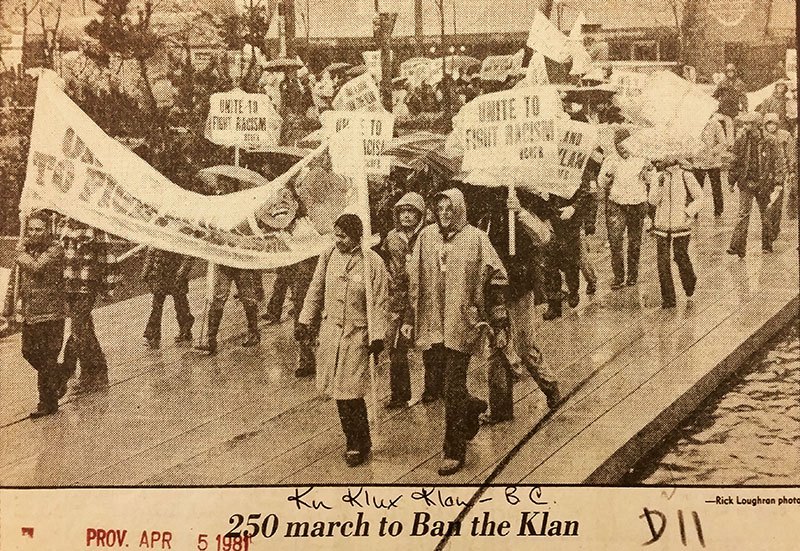 Once again, the KKK didn’t have much success in BC, beyond handing out propaganda at places like Van Tech High School, and UBC. Eventually, the KKK gave way to the Skinhead Movement, which in turn was supplanted by the more recent Alt-Right. Just like the Klan of the 1920s, they seem to be better at galvanizing opposition than advancing white supremacy. Just look at the recent Alt-Right rally at City Hall last summer, that was transformed into an anti-racist demonstration by thousands of counter-protesters. 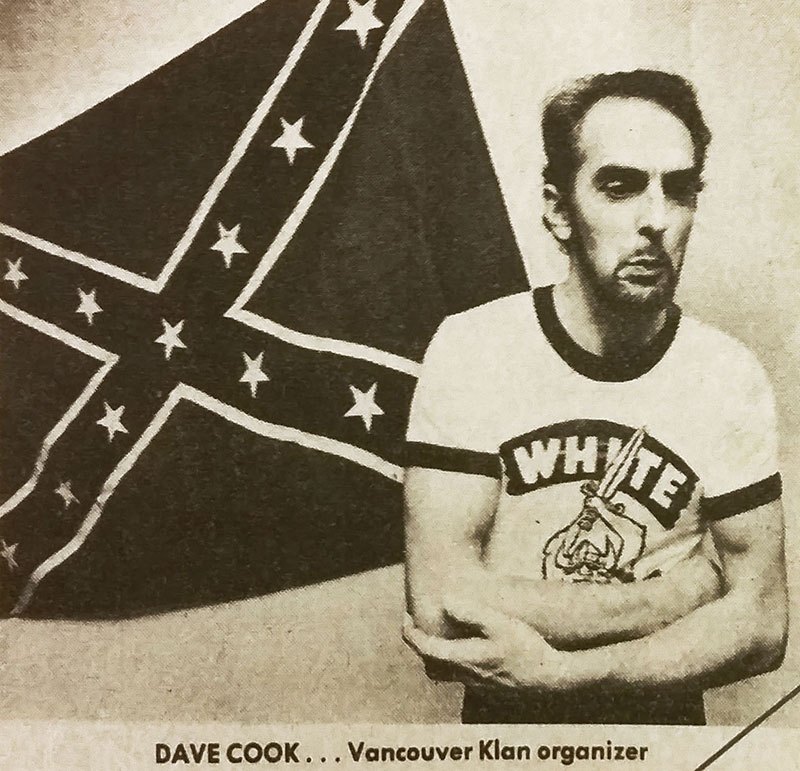 Dave Cook, Klan organizer for Western Canada. Cook replaced Wolfgang Droege but denounced the Klan after Droege and other racists tried to overthrow the government of Dominica. Vancouver Sun, 16 December 1980.

David Duke quit the Ku Klux Klan before the end of 1980 because, he says, of its violent tendencies.

Today he calls himself Dr. Duke based on a PhD he received from an unaccredited university in the Ukraine. He spends much of his time trying to ingratiate himself to Donald Trump, who infamously dragged his feet in disavowing Duke’s endorsement during the 2016 presidential campaign. 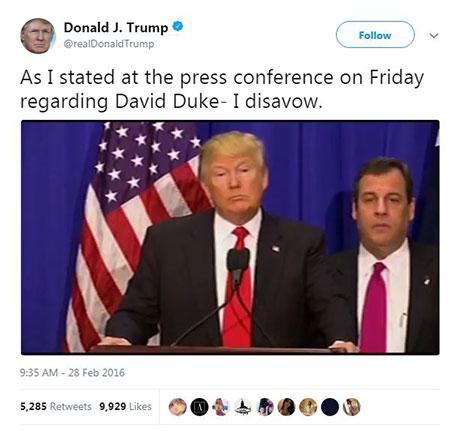 Droege landed a three-year prison term for a failed coup d’etat of the tiny Caribbean island state of Dominica, known as the “Bayou of Pigs” because the operation was launched from Louisiana. Had they been successful, Dominica would have been used as a base for broadcasting Klan propaganda and military training for Klansmen. The plot led Dave Cook, Droege’s successor as Western Canadian Klan organizer, to quit the organization. Droege was murdered in a drug deal gone awry in 2005.