It’s a very graphic event to fund a very graphic novel. Join Vancouver’s own directing duo, the Twisted Twins (Jen and Sylvia Soska – ‘American Mary,’ ‘Dead Hooker in a Trunk’) at the Rio Theatre for a Kickstarter party and fundraiser for their upcoming graphic novel, KILL-CRAZY NYMPHOS ATTACK!

It’s their first foray into the graphic novel realm and they will be appearing in the book as the “Sister Sisters” described as timid twin nuns turned maniacal knife wielding man eaters. A few weeks back Jen and Sylvia were on Knights of Dunsmuir Podcast and explained the basic premise of their upcoming book. 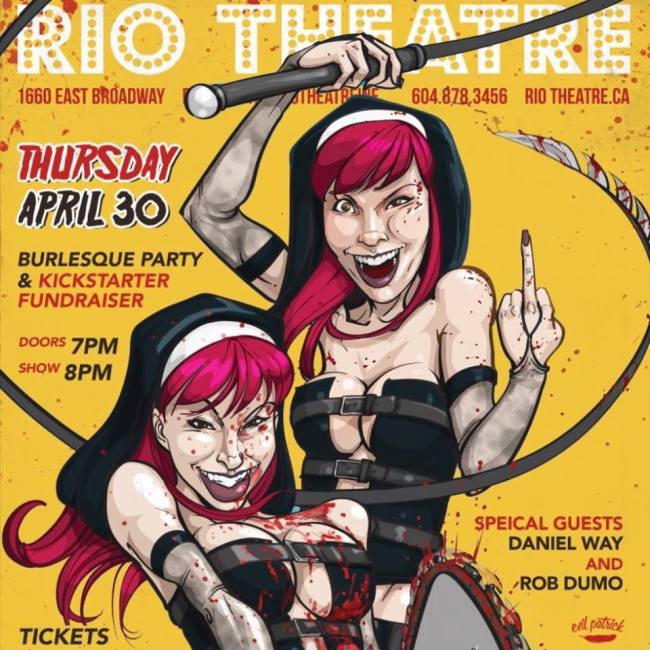 Check out their Kickstarter link for more information on their project here –> www.kickstarter.com/projects/1556892230/kill-crazy-nymphos-attack

In addition to Jen and Sylvia being available for special photos with performing cosplayers and fans, KCNA! (Kill-Crazy Nymphos Attack!) artists Rob Dumo will be on hand drawing LIMITED EDITION KCNA! posters where guests can appear either as a Kill-Crazy Nympho or themselves (for the ladies) or being killed by Jen and/or Sylvia (for the fellas) as the characters from their book, The Sister Sisters.

Guests are *highly encouraged* to dress up in their favorite comic themed cosplay. Of course, sweet prizes will be awarded for the best.

Get your tickets and support these Vancouver artists. Keep an eye out for the next Soska Sister film Vendetta set to come out on June 12th. Below is a trailer for one of their previous films American Mary.