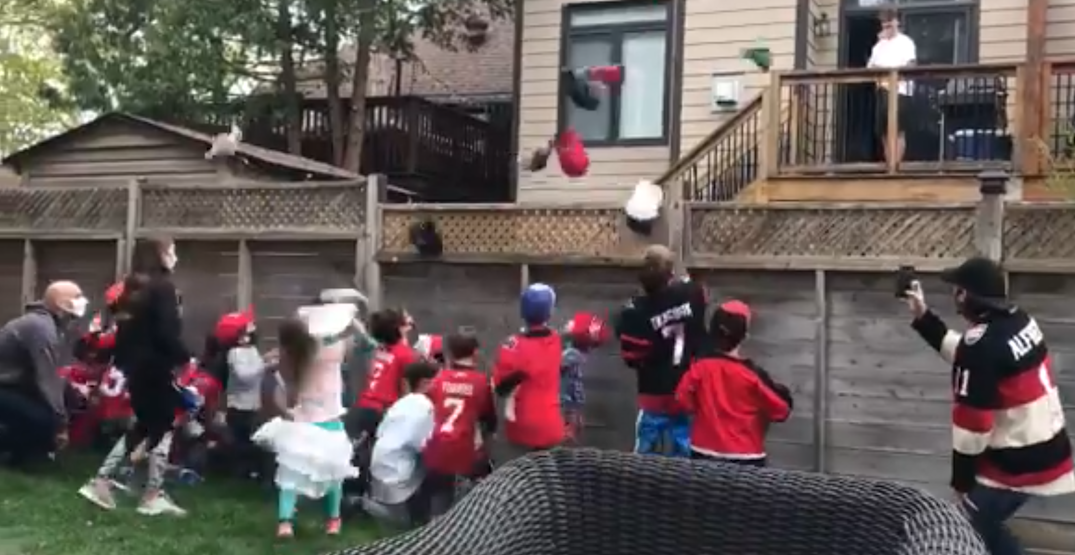 Without fans in the stands at Ottawa Senators games this season, a group of kids got creative to show appreciation.

Senators rookie Tim Stützle netted his first-career hat trick on Saturday in Winnipeg. On Monday, the 19-year-old German was treated to a unique salute from a group of kids in his neighbourhood.

Standing on the other side of his fence, 18 children and a few of their parents waited for Stützle to appear on his balcony before unleashing a barrage of hats into his yard.

When you score your first NHL hat trick with no fans in the stands, the local kids make sure it gets all the recognition it deserves. #GoSensGo #Senators #JimmyStu #Sens ⁦@BradyTkachuk71⁩ ⁦@joshnorris10⁩ ⁦@Senators⁩ pic.twitter.com/OkC8JrRGCo

“I walked out there and there were so many people, and I didn’t really know what to say because I’ve never seen something like that,” Stützle told reporters today. “I don’t have a lot of words for what they did for me.”

Stützle, who lives with teammates Brady Tkachuk and Josh Norris, said the group got in touch with Tkachuk ahead of time.

The rookie was clearly touched by the gesture.

“It was unreal. Suddenly there were the whole neighbourhood kids [there]. That was definitely unreal and a great thing of them to do that, and I was very, very happy for that. I can’t thank them enough for doing that.”

“I received a lot of texts [from back home in Germany saying] how beautiful that is and what a nice thing. My parents saw it as well, and they were really happy for how the fans treated us here, and that’s just great to see.”