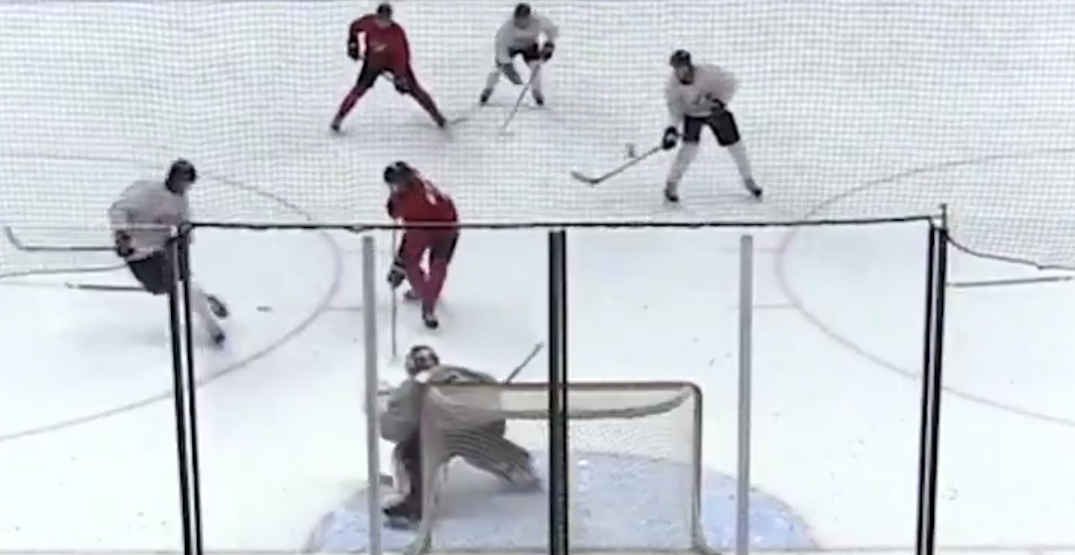 If you’re starved for hockey highlights, this is a welcome sight.

Selection camp began for the World Juniors in Red Deer yesterday, as 48 hopefuls begin a four-week grind in the hopes of suiting up for Team Canada this winter.

On the second day of practice, we already have a highlight reel goal, courtesy of the foot of Kirby Dach. The 2019 third overall draft pick kicked the puck to a teammate while on a two-on-one, fooling the opposing defenceman to set up a one-timer.

It’s only practice, but still impressive as hell.

Tic-Dach-Toe@kdach77 opening up his bag of tricks! 🧙‍♂️ #WorldJuniors pic.twitter.com/kKHhHvBaQS

Dach, who played 73 games (regular season and playoffs) for the Chicago Blackhawks last season, will be one of Canada’s best players in the tournament. The World Juniors will have added star power this year, given that the NHL won’t start until January at the earliest.

And if Dach’s goal didn’t whet your appetite for hockey returning, this one will.

Samuel Poulin scored a goal caught on video by TSN’s Ryan Rishaug, in which the Pittsburgh Penguins first-round pick shows an incredible combination of grit, determination, and skill.

Samuel Poulin with an early candidate for goal of the day, maybe training camp. pic.twitter.com/JNMtshZhMY

This year’s World Juniors tournament will take place in Edmonton, utilizing the same bubble concept that was so successful for the National Hockey League last summer. Players will live in a cohort bubble, resigned to the rink and the hotel until January. Those entering the bubble are tested multiple times and will be tested twice a week after that.

Other teams will begin arriving to Edmonton in December, with pre-tournament games starting on December 20. The puck drops on the tournament on Christmas Day, with Canada’s opener scheduled for December 26.