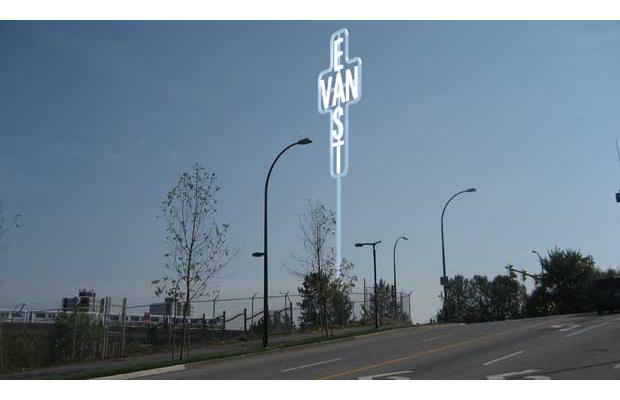 This is cool as East Vancouver usually gets shafted when it comes to public art in the city, as Ken Lum noted him self in the Vancouver Sun article. Born and raised in East Vancouver I’ve seen this sign plastered around sporadically on back walls and such since I was like 8 years old. If you are from East Van you know all about the history of this symbol, some say it has to do with the various gangs that use to run things and make life miserable for those on the west side of town and others say it was just simple grafitti that became iconic over the years.

The public art work by artist Ken Lum is called Monument for East Vancouver. Placed on a ridge looking down on the False Creek flats, the 20-metre tall work will spell out — in the form of a cross — the phrase “East Van” with the two words sharing and crossing at the “a.” The words will be lit by white LED lights and surrounded in an outline of white LED lights. With the cross-shaped phrase mounted on a silver base, the words should look like they’re floating in space. The monument should also be visible for kilometres in several directions but especially to anyone approaching the eastside from the west.

The corner of East Sixth and Clark wasn’t his first choice. He wanted something on Main Street but after a community review, the city decided on the prominent spot-on city-owned land in an industrial area. The city hopes to have the monument installed by mid-December.

I would have liked to see this art erected on Main, Fraser/Kingsway, Collingwood neighbourhood or Commercial instead of the location it’s going in, but I guess this location is better than none. Knight Street is also going to get some sort of public art, which is also great news. All I can say is it’s about damn time the city starts to look east of Main Street. Yeah I’m looking at you Gregor!