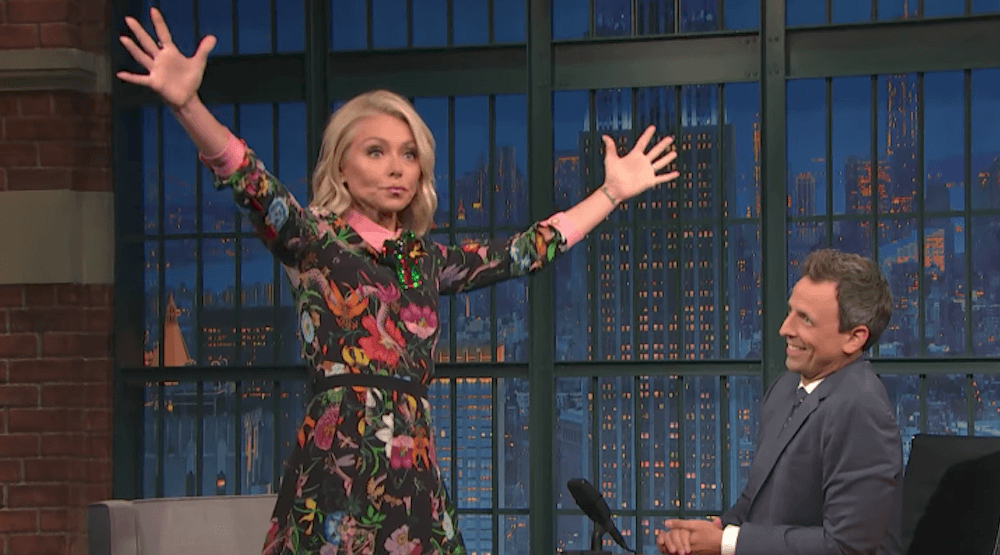 It’s no secret that American TV host Kelly Ripa is a self-described #fanada (A fan of Canada, according to her Instagram account.)

And after gushing over the recent trip she made here to visit her husband as he does film work on Riverdale, Ripa once again regaled audiences with stories of her trip to Canada’s West Coast, this time on Late Night with Seth Meyers.

During the interview, she talks in particular about a camping experience she and her family enjoyed on Vancouver Island.

“We took the kids camping at a place on Vancouver Island at a place where, the first thing you do is you arrive by seaplane,” she recalls to Meyers.

Admitting that she may have under packed somewhat for the journey, she reveals that all she packed “was two bikinis and a pair of shorts.”

After all, she explains, ” Mark said ‘We’re going camping but they have a jacuzzi.'”

While she doesn’t name where they stayed other than mentioning it being in the Ursus Mountains, Ripa talks about being picked up by horse-and-buggy after the plane landed.

Ripa then tells Meyers the trip organizers took away the food she had and put it in zip-loc bags, telling her she could have it after she checked out.

After asking them why they were doing this, Ripa said the organizers told her, “you don’t want the bears to come to your tent.”

After check-in was complete, Ripa continues, she and her family went for a bike ride and it wasn’t long before they saw when of the area’s natural inhabitants.

“We had been there for four minutes, we were riding on this path, and all of a sudden a bear gets up, and is like, ‘Hey I’m a bear.'”

Ripa says the guides she was with told her the bear was “Brown Bum” and that he would “run away in a minute.”

In the end, everyone turned out okay, and Brown Bum ultimately left the scene, but it’s an experience Ripa will likely remember for a long time.