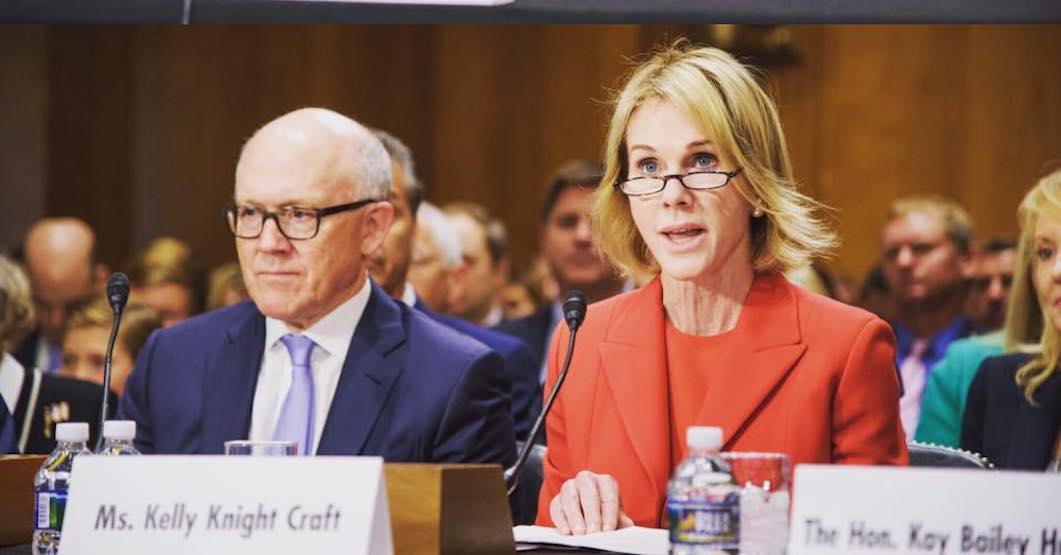 Trump’s administration has confirmed its new Ambassador to Canada.

Kentucky’s Kelly Knight Craft has been confirmed as the “Ambassador Extraordinary and Plenipotentiary of the United States of America to Canada.”

“I congratulate Kelly Knight Craft on her confirmation to be United States Ambassador to Canada. Our two nations share much more than a border; we have a heritage of trade and security relations that benefit us both,” said US Senate Majority Leader Mitch McConnell in a statement. “As a proven advocate for our national interests, Kelly will use her position to continue the long history of friendship between the United States and Canada. I appreciate her willingness to serve our country once again, and I know that she will make Kentucky proud.”

Nominated by President Trump, she previously served the Bush administration in 2007 as an alternate representative for the US delegation to the United Nations General Assembly.

During her nomination hearing, McConnell said that Knight Craft possessed the necessary skills and experience to continue the long history of friendship between Canada and the US.

“The United States and Canada are closely interconnected, sharing a common history and set of values, while boasting a strong bilateral relationship founded on robust security and trade relations,” said McConnell. “Maintaining this strong relationship between our two nations is vital to both of us.”

Knight Craft’s confirmation comes in just in time for the renegotiate the North American Free Trade Agreement (NAFTA), which we know Trump is not a fan of.